Ten thousand take part in ‘March of the Living’ around Auschwitz 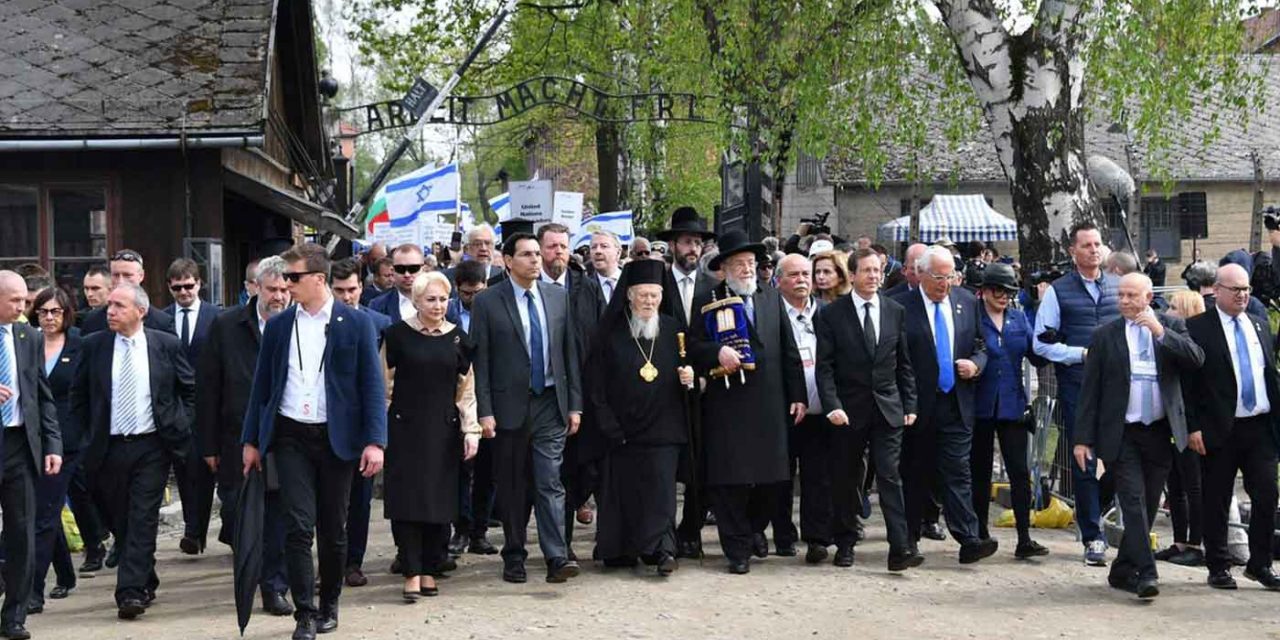 Ten thousand people have taken part in this year’s ‘March of the Living’ around Auschwitz, the former Nazi death camp.

Yesterday was Yom HaShoah, Holocaust Remembrance Day for the Jewish people, and a very special way that Yom HaShoah is commemorated is with the ‘March of the Living’, an organised walk around Auschwitz.

Auschwitz death camp, located in Poland, was the largest of the German Nazi concentration camps and extermination centres. Over 1.1 million men, women and children lost their lives there between 1940 and 1945.

This year 10,000 people took part in the March of the Living through the camp, which is today an exhibition and education centre for the Holocaust.

WATCH: Holocaust survivors led the March of the Living on Thursday, Holocaust Memorial Day, from the WWII Nazi death camp Auschwitz to the Birkenau camp, in memory of those killed. Of the 6 million Jews murdered in the Holocaust, ~1.5 million died in the Auschwitz-Birkenau camp. pic.twitter.com/KpeN7uFSea

For the first time ever, a US government delegation attended the march.

“I couldn’t be more proud of the unprecedented commitment of this administration to fight against antisemitism,” U.S. Special Envoy to Combat and Monitor Antisemitism, Elan Carr, told reporters at the event.

“There is no administration, no president, no Secretary of State that have ever committed themselves to this extent to fight against antisemitism, to protect the Jewish people, and to support the State of Israel,” he added.

Hollywood actress Suzanne Somers also marched with the U.S. delegation, and told Breitbart News: “I’m here because I’m concerned about the rise in antisemitism, and I want to say that ‘Never Again’ means ‘Never Again’.”

Israel’s Ambassador to the United Nations was also in attendance.

On #HolocaustRemembrance Day, dozens of #UN ambassadors join me beneath the infamous "Work Set You Free" sign of the Auschwitz deathcamp. We are about to join the #MarchoftheLiving with @USAmbIsrael & thousands of people from around the world on the walk to Birkenau. #UNAmbTrip pic.twitter.com/maO9q5M84N

In 2019, 70 Holocaust survivors participated in the march, which is far fewer than the 500 survivors who took part in the first march in 1988. Naturally, the number of living survivors is decreasing each year, to the point where none will be left in the future.

Edward Mossberg, 93, a Holocaust survivor who lost all of his family in the death camps, and who has participated in the annual march for two decades, told reporters that he was there to honour the dead.

“Only the dead can forgive.”

Another survivor marching was 91-year-old Nate Leipciger, who has attended the event 21 times, including this year.

“The first time I walked here was in 1943, with my family, when we walked from the Judenrampe to Birkenau,” Nate said, referring to his parents and brothers and sisters who were being held captive by the Nazis in the camp. His whole family died at the camp.

“Now I came back with my family,” he said. His family now includes his three daughters, nine grandchildren and one great-grandchild. An amazing testimony that the Jewish people live on whilst the Nazi regime is no more.