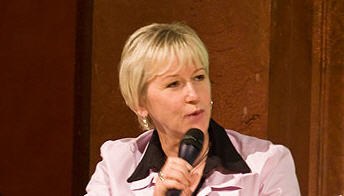 Sweden’s foreign minister has been criticised for reportedly saying Friday’s terror attacks in Paris were rooted in the frustration of Muslims in the Middle East, including that of Palestinians.

“To counteract the radicalization we must go back to the situation such as the one in the Middle East of which not the least the Palestinians see that there is no future: we must either accept a desperate situation or resort to violence,” Margot Wallström told Swedish television network SVT2T (link in Swedish) a short while after the attacks on 13 November, which killed 129 people and were claimed by the Islamic State terrorist organisation.

EJC President Dr. Moshe Kantor, whose organisation represents Jewish communities throughout Europe, has condemned the comments saying, “Radical Muslims massacred civilians enjoying a night out in Paris and Foreign Minister Wallström tried to make it about the Jewish State,”

Dr. Kantor said. “She has completely ignored the remarks made by those behind the attacks, Islamic State organisation, almost as if depriving them of any agency for their reactions. This is a deeply troubling worldview and borderline racist.”

He further accused Wallström of ignoring “the tens of conflicts around the world involving Muslims and cherry-picks the only conflict involving Jews, as if to once again suggest, perhaps not consciously, the age old idea that the Jews are always central to international affairs in a malevolent way, and behind every event the hand of Jews can be found.”

The Swedish minister’s controversial statement was first reported by David Metzler, an American-born Swede living in Israel, who called it “foolish and irresponsible at best,” in a Times of Israel blog post.

There was also backlash from Jerusalem. The Swedish Embassy in Israel responded by denying that Wallström had “said that Israeli Palestinian conflict is linked to tragic events in Paris.”

Swe FM has not said that Israeli Palestinian conflict is linked to tragic events in Paris. Sweden condemns all acts of terrorism.

In her official response, posted Saturday to the Swedish Foreign Ministry website, Wallström condemned Friday’s “despicable” attacks, calling them acts of terrorism that target democracy and open societies. “They must and will be met with resolve; terrorism must be opposed and those responsible must be called to account.”