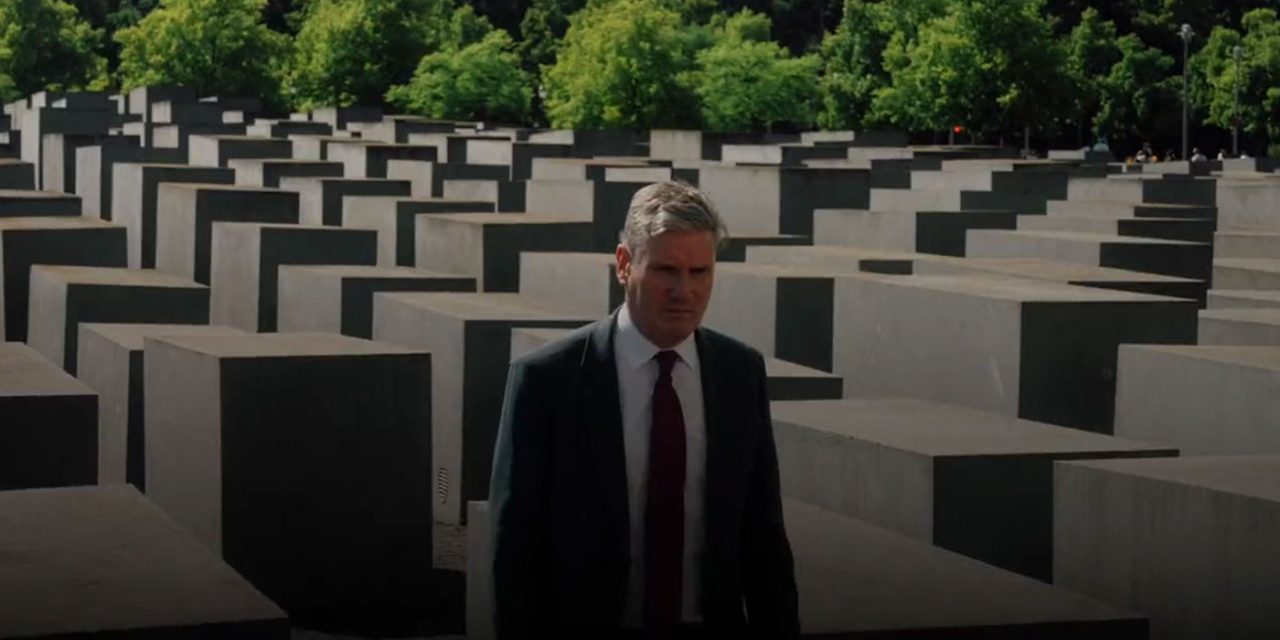 Labour leader Sir Keir Starmer has drawn the ire of the Jewish communities in Germany and the UK after releasing a video that used the Berlin Holocaust Memorial as a prop in a political campaign video.

There has long been an unwritten rule that the Holocaust memorial should never be used as a prop for photo shoots or videos unless they specifically reference the Holocaust. There are social media accounts that repost tone-def images of tourists posing and smiling whilst standing next to or on top of the memorial.

This is a massive faux pas in Germany pic.twitter.com/8nNZlR00OL

It is fair to say that some may not know that The Memorial to the Murdered Jews of Europe, as it is officially called, is actually a place of severe reverence. The striking display of 2,711 concrete slabs spread across a 2,000-square-foot site does make for some remarkable photos. However, the Labour leader was clearly aware of the memorial and what it represented. So it is quite surprising that he and his team would choose footage of him and David Lammy MP walking amongst the memorial while the video itself was a political campaign video that made no reference whatsoever to the atrocities of the Holocaust.

The campaign video was about winning an election in the UK and had nothing to do with the Holocaust. It was a shameful use of a sensitive memorial to more than six million Jews who were murdered by the Nazis, reducing it to a mere prop for a political video.

I came to Germany with a clear message: Labour will fight and win the next general election on the economy. pic.twitter.com/k1MXwAQkxc

The UK-based Campaign Against Antisemitism accused Sir Keir of “exploiting” a visit to the memorial for campaigning purposes, calling the move as “manipulative and repulsive”.

Joe Glasman, the organisation’s head of political and government investigations, said: “It is a matter of decency and long-established convention in Germany that you never stoop to using the Berlin Holocaust Memorial as some kind of a prop”.

“But to incorporate the Memorial as the backdrop for a political clip that does not even mention the Holocaust is an insult”.

Volker Beck of Tikvah, a German organisation that combats antisemitism, said: “Kier Starmer needs self-reflection. It’s not just in Germany where you are supposed to respect these places.

“It’s noticeable that someone from the British Labour Party goes to the memorial and doesn’t pay appropriate respect.

“He also wrote an empty statement in the Holocaust book, which was made into a statement about global social injustice.

“He knows why they were killed. Antisemitism is not just a fight for social justice and a good world. Where is the remembrance of the victimhood of six million murdered European Jews?

“What many don’t recognise is that for the Nazis and fascists, antisemitism was defining. They didn’t agree on anything completely, other than that. Hate for Jews was what they had in common.

“Starmer doesn’t understand antisemitism if he thinks it’s just another form of prejudice like homophobia. If you don’t understand that, you are helpless in the fight against it.”

Nicholas Potter from the Amadeu Antonio Foundation, which fights antisemitism in Germany, told the Jewish Chronicle: “Starmer should apologise and listen to the criticism that people in the Jewish community are making if Labour wants to make good on his promise to follow on from the Corbyn years in a positive way.

“Appropriating a memorial for the six million Jews murdered in the Shoah as a backdrop for an election campaign video is tasteless enough. That the video fails to even mention the horrors of National Socialism is a serious misstep from a party that, given its recent history, simply needs to do better when it comes to fighting antisemitism and regaining the trust of the Jewish community.

“Starmer is posing in front of the memory of Europe’s murdered Jewry in order to score cheap political points, while failing to address not just the murderous legacy of fascism, but also the very alarming resurgence of antisemitism across Europe.”

Sigmount Königsberg, the Commissioner for Antisemitism for the Berlin Jewish Community, added: “UK Labour eliminated the Shoah. Keir Starmer made the Holocaust Memorial just a meaningless backdrop. It added to the sense that Jews are only extras in the memorial theatre in Germany.”

It seems the Labour leader is unable to see the insult he has caused. Sir Keir Starmer rejected accusations that he used a visit to Berlin’s Holocaust Memorial for political campaigning purposes and offered no apologies.

Instead, Starmer claimed the tour was part of his duty as a political leader to prevent such atrocities from happening again. It sounds like a typical answer from a politician who is refusing to see the error of his ways.

It is clear that in Germany this site is off limits to such filming and it is shameful that the Labour leader, who has done a lot to bring Labour away from the antisemitism under Jeremy Corbyn, cannot show humility and decency and admit he was wrong to do such a thing.

The Holocaust is the greatest tragedy in human history. It resulted in more murders than any other genocide in history and the effects of the Holocaust are still felt within the Jewish community today. We must never allow the memory of the Holocaust to be forgotten or diminished and we expect senior politicians in Britain to know better.