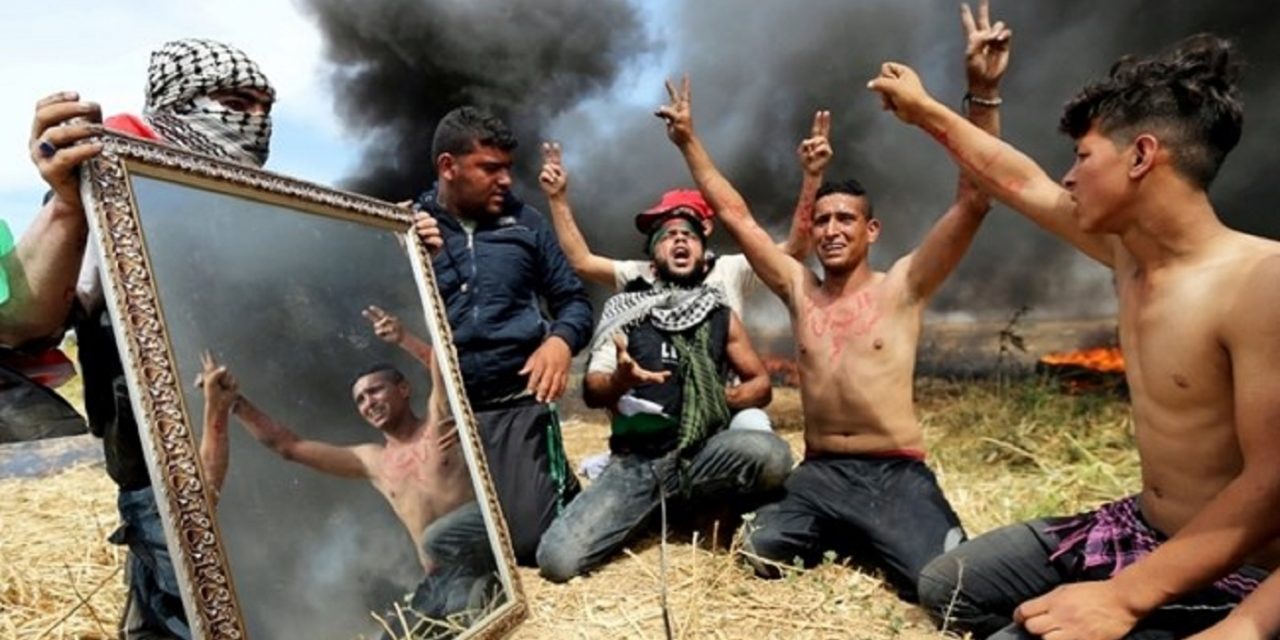 A week after Palestinian protesters rioted at Israel-Gaza border, the second wave of the “March of Return” protests will begin this Friday with plans to burn thousands of tyres at the Gazan border with Israel.

10,000 tyres are being placed along the Israel border and will be set on fire to create thick smoke to obscure view of IDF forces. They are also collecting mirrors to try and blind IDF. Meanwhile, Israel has warned that dangerous toxins will cause an “ecological catastrophe”.

You could say they are using “smoke and mirrors” not only literally but also in their blatant lies and deception to the world.

URGENT ACTION: We must stand with Israel against the evil actions of Hamas terrorists.If you are in the UK, please join us in writing to Boris Johnson and your local MP to let them know that you stand with Israel and they must too!To defend Israel, go to: https://bit.ly/2GUCceB#Israel #CUFI #PrayforIsrael #DefendIsrael #IDF

Posted by Christians United for Israel – UK on Thursday, 5 April 2018

Hamas announced on Thursday it would pay $3,000 to the family of anyone killed in the protests, $500 to Palestinians critically wounded and $200 to those who sustain more minor injuries.

Last Friday, the $10 million Hamas-led attempt to breach through Israel’s security, resulted in the killing of 19 Palestinian rioters – 16 of whom were affiliated with terrorist organisations. Their message to world was that the protests were “peaceful”. Nothing could be further from the truth. The violent attacks by these terrorists and use of women and innocent children received no international condemnation whatsoever. Instead the mainstream media and UN condemned Israel, not Hamas.

Palestinians collect so many tyres which they said they are going to move to borders fence and burn them to disrupt Israeli soldiers from shooting on #Gaza borders. @IKershner @halbfinger pic.twitter.com/Bw2YKYalDr

Hamas political bureau chief Ismail Haniyeh has threatened to intensify the protest, saying, “Our people cannot stand the continued siege on Gaza. In the march on Friday we stopped at the border line, but next time we do not know where the line will be.”

The hashtag “day of the tire” has been trending on social media and organizers of the demonstrations from various Palestinian factions have called on Gazans to help them collect 10,000 tyres.

Demonstrators plan on igniting the tyres, which will create a smokescreen, shielding protesters — and, the IDF said it fears, terrorists — from the view of army snipers. On Friday, the IDF said rioters used burning tires to damage the fence surrounding the coastal enclave by rolling them toward the barrier.

Instructions shared widely on Palestinian social media encouraged Gazans to not wear clothing that would stand out, and to keep their faces covered, as Israeli drones will be taking pictures of those present and will be able to identify them quickly.

Moreover, women were encouraged to bring mirrors and laser pointers in order to blind IDF soldiers on the other side of the border.

In an impassioned pair of tweets, Prime Minister Benjamin Netanyahu’s spokesperson Ofir Gendelman warned that “Hamas will try this Friday to torch the border fence with Israel with thousands of tires.”

“This will burn down Palestinian fields near the border and the heavy smoke, toxins and pollution will cause a huge environmental disaster for Palestinians. But Hamas doesn’t care. Remember that,” he added.

As Gazans started to pile-up thousands of tyres, Israel’s liaison to the Palestinians penned a letter Wednesday to the head of the World Health Organization calling on him to prevent the “ecological catastrophe.”

“This is a serious environmental issue that will harm the health of the residents and will cause unprecedented air pollution,” wrote Maj. Gen. Yoav Mordechai, the head of the Coordinator of Government Activities in the Territories, to WHO Director-General Tedros Adhanom.

I call upon you, as the head of an international organization whose goal is to promote health and protect natural and environmental resources, to do everything in your power to publicly warn against this ecological catastrophe and to protest Hamas’ irresponsible behavior,” he added, referring to the terror group that rules the Gaza Strip and has been supporting the protests.

#Gaza's warlords #Hamas have a new plan for tomorrow… set the border with Israel on fire🔥! Thousands of tires amassed in fields along the border. The heavy smoke, toxins & pollution will destroy fields and result in Gaza's 1ˢᵗ environmental disaster! #StopHamas pic.twitter.com/hR7pZDX9aj