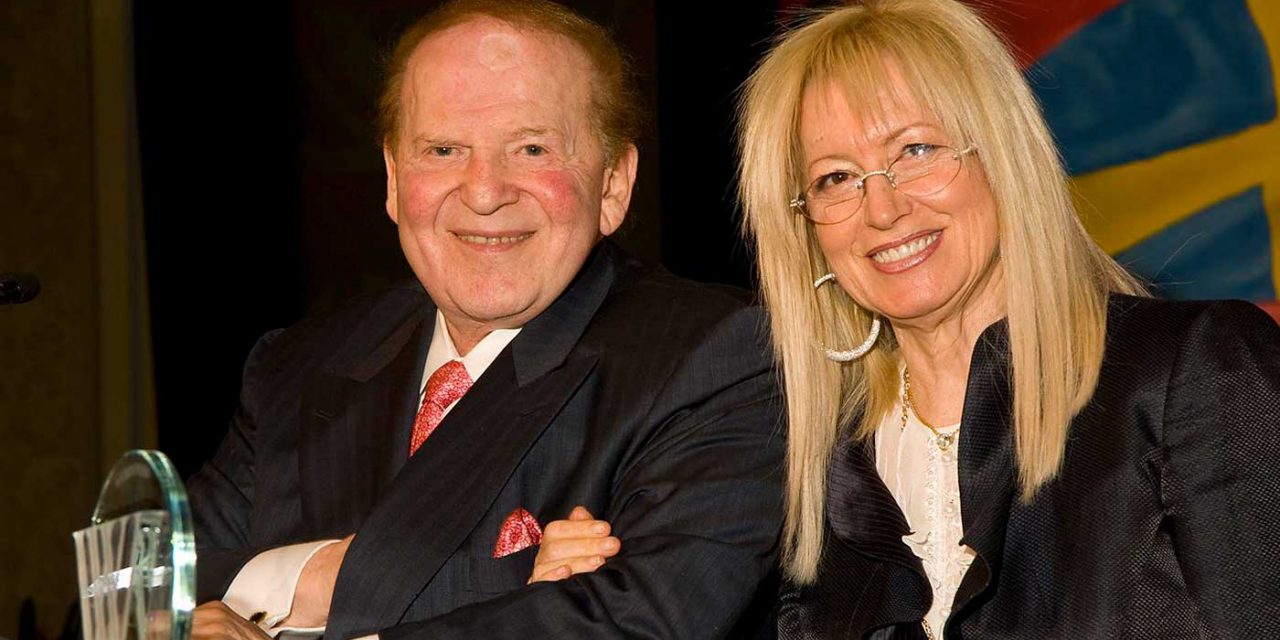 Sheldon Adelson, an Israeli-American billionaire and staunch defender of Israel, died after battling cancer since 2019. He was 87 and was laid to rest in Jerusalem.

Adelson’s story is one of America’s rags to riches tales, a son of immigrants worked his way from selling papers at the age of 12 to become one of the richest people on earth. Sheldon Adelson founded and served as Chairman and CEO of Las Vegas Sands Corp., the world’s largest gaming corporation, from its inception in 1988. At one point he was the third richest person on the planet.

Adelson shared that wealth as a generous philanthropist. Along with his wife, Dr. Miriam Adelson, he underwrote medical research, a private school, drug rehabilitation clinics, and numerous other causes.

Adelson’s conservative values, love for the United States and Israel, and his desire to preserve the strongest diplomatic and cultural ties possible between the nations compelled him to embrace and support Jewish causes.

He was one of Israel’s strongest and most impactful supporters. He played a major role in developing Israel, funding schools and education, supporting the Israel Defense Forces (IDF) and even publishing a free Newspaper in Israel which became the most read newspaper in the country. He even funded Israel’s space mission to the moon in 2019.

His love for Israel stemmed from his Jewish roots, as Israel Hayom reports:

“Sheldon Adelson was a unique combination: a philanthropist, a devout Zionist, and a true fighter for Israel, and a person who was wholeheartedly determined to safeguard the future of the Jewish people.

His connection to Israel can be traced all the way back to his childhood in Boston, to a poor Jewish family. His father, who arrived in the US from Lithuania as a child, always told him that his fervent wish was to visit the Jewish state.

His father never made it, but when his son arrived in Israel shortly after his death several decades later, the younger Adelson decided to symbolically wear his father’s shoes as he disembarked the plane.

For Adelson, who passed away after a long illness on Tuesday, it was clear that the future of the Jewish people should never be taken for granted.”

Sheldon Adelson was a giant among men and was remembered by many in both Israel and America. Here are just a few of the tributes for Sheldon Adelson.

Pastor John Hagee, founder and chairman of Christians United for Israel (CUF), said, “Diana and I mourn the passing of our dear friend Sheldon Adelson. Sheldon was a genuine champion for democracy and a stalwart benefactor of Israel and the Jewish people around the globe. His passion for life and family was a Godly example to all who knew him.”

Prime Minister Benjamin Netanyahu said he and his wife Sara were “heartbroken by the passing of Sheldon Adelson. He was a wonderful friend to us personally and an incredible champion of the Jewish people, the Jewish state and the alliance between Israel and America.”

“The warmth of his heart, the clarity of his thinking and the decisiveness of his actions were truly exceptional.

“From humble beginnings in a suburb of Boston, he rose to be one of world’s greatest entrepreneurs and philanthropists. With his wife Miri he contributed endlessly to strengthening the Jewish people and the Jewish state, funding breakthroughs in medicine and science and advancing higher education. He gave anonymously to help victims of terror and countless other people in need. Sara and I join Miri and the family in mourning a great friend, a great man, and a great Jewish patriot. We will never forget him. May his memory be blessed.”

US President Donald Trump said “Sheldon lived the true American dream. His ingenuity, genius, and creativity earned him immense wealth, but his character and philanthropic generosity his great name. … Sheldon was true to his family, his country, and all those that knew him. The world has lost a great man. He will be missed.”

Former US President George W. Bush said Adelson “battled his way out of a tough Boston neighborhood to build a successful enterprise that loyally employed tens of thousands – and entertained millions. He was an American patriot, a generous benefactor of charitable causes, and a strong supporter of Israel. Sheldon was a generous benefactor of charitable causes, especially medical research and Jewish heritage education. He will be missed by many – none more than his beloved family.”

Nikki Haley, former US Ambassador to the UN, said on Twitter: “Sheldon Adelson lived a true American life. Born from humble beginnings he achieved extraordinary things. He was a defender of America, a champion of Israel and a friend. His good deeds and legacy will continue to shape the lives of millions.”