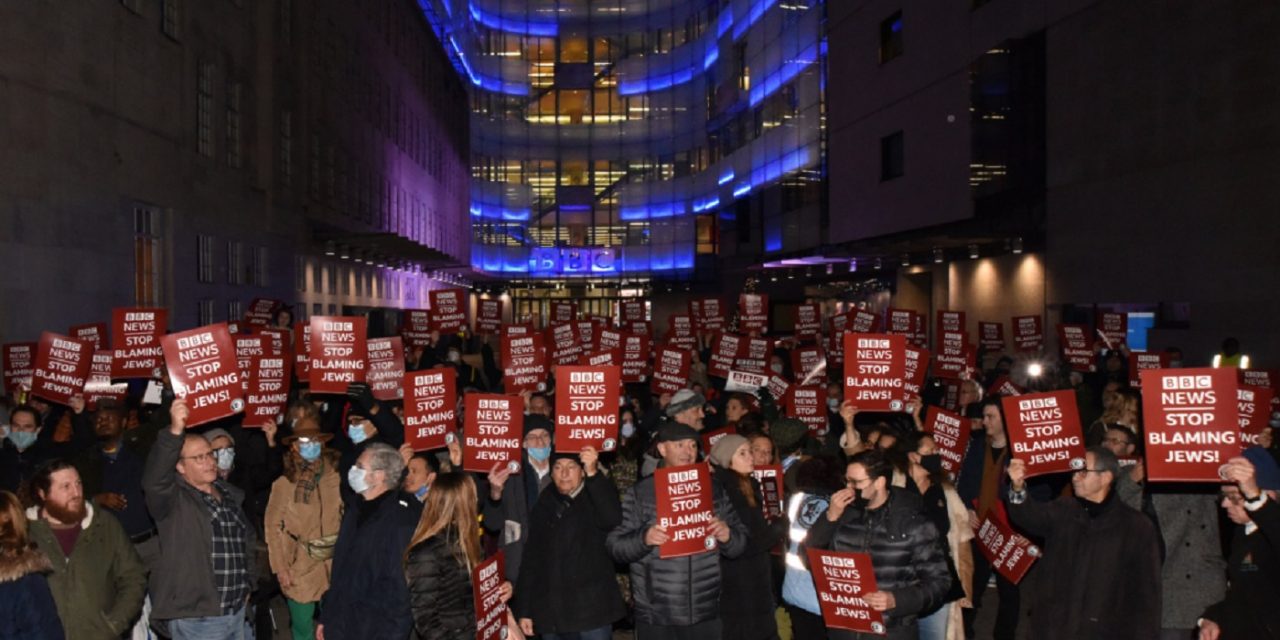 Around 150 people attended a demo outside the BBC’s Broadcasting House on Monday night to protest against coverage by BBC News about the antisemitic attack on Oxford Street during Hanukkah.

The “BBC News Stop Blaming Jews” protest, which was organised by the Campaign Against Antisemitism, took place after a news report blamed victims for “a slur about Muslims” while describing the shouting, spitting and Nazi salutes from outside the bus as “alleged” antisemitism.

The claims, which were unilaterally added by the BBC after the original report, have been lambasted by Jewish groups and others who have pointed out that it was being mistaken with appeals for help in the Hebrew language.

Jewish News reports that a line in the BBC’s coverage of the incident – in which a group of around six males made Nazi salutes, spat and shouted antisemitic slurs at a busload of Charedi schoolchildren last Monday – read: “A slur about Muslims can also be heard from inside the bus.” No other media has so far published such a claim.

In the audio someone is heard saying in apparent Hebrew: “Tikra lemishehu, ze dachuf” – “Call someone, it’s urgent”. It is understood the BBC took this be someone shouting in English: “Dirty Muslims”. Former BBC chairman Lord Michael Grade has urged the corporation to prove its claim or apologise.

The CAA said: “We are demanding explanations over the BBC’s outrageous coverage of the recent antisemitic incident on Oxford Street during the Jewish festival of Chanukah, when the BBC’s reports victim-blamed Jewish teenagers for being attacked.”

A protest is taking place outside the BBC after its recent coverage of the antisemitic incident on Oxford Street earlier this month. It is being held by @antisemitism pic.twitter.com/iojxLyWOqp

“This incident is one of many in which the BBC has victim-blamed Jewish people for antisemitism, downplayed racism towards Jews, platformed antisemites and fuelled antisemitism in Britain.”

It is understood that Chief Rabbi Ephraim Mirvis has written privately to Tim Davie, director-general of the BBC, to express his concerns.

Tonight we gathered in our hundreds outside the @BBC with a clear message: #BBCNewsStopBlamingJews! pic.twitter.com/TNCueKg6EE

The Board of Deputies has called for the BBC to issue an apology to victims and clarify where it obtained this information from, saying: “The BBC thought that they heard a slur in English. What they were actually hearing was a distressed Jewish man speaking in Hebrew appealing for help.”