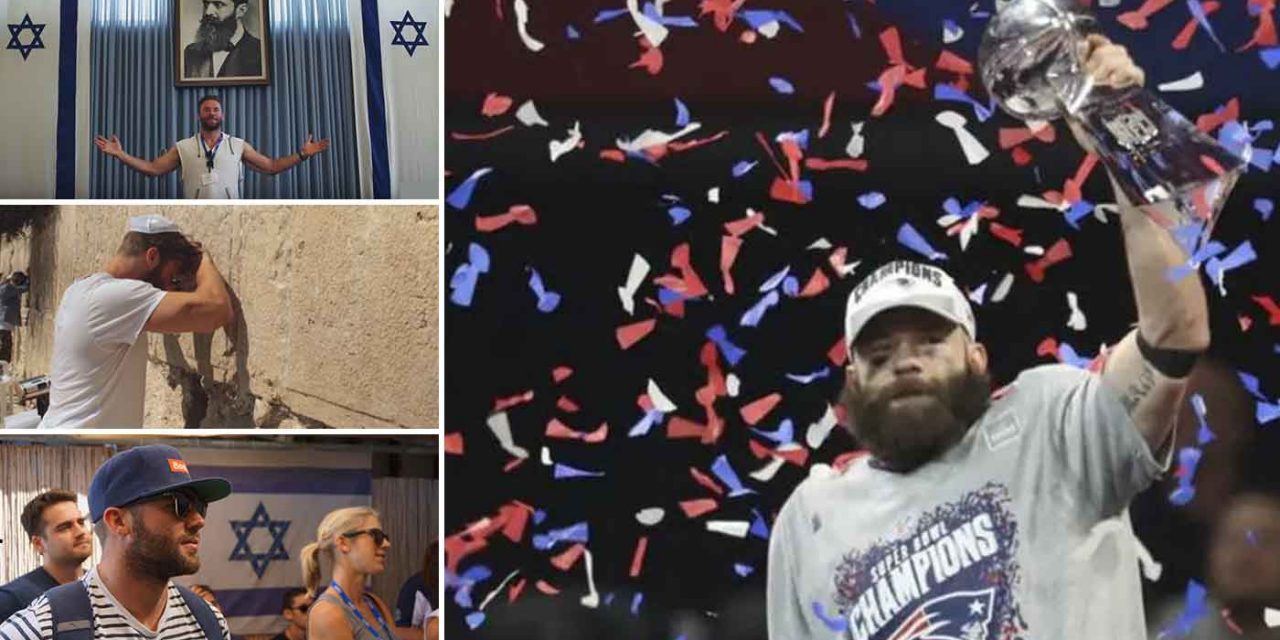 Julian Edelman, a pro-Israel Jewish NFL player, was named Most Valuable Player in the Super Bowl. He became the first Jewish player to ever be awarded the honour.

He was awarded this title after the New England Patriots beat the Los Angeles Rams 13-3 in Super Bowl LIII in Atlanta on Sunday.

Despite the game being the lowest scoring game in Super Bowl history, Edelman provided some of the rare offensive highlights with 10 catches for 141 yards, more than half of his team’s total receiving yardage. He also holds two Super Bowl records: career punt returns (8) and first half receptions in a single game (7).

Edelman, 32, is one of only a few Jewish players in the league. He has shown his Jewish pride on a number of occasions. In a 2014 game, for instance, he wore a pin featuring the Israeli flag. He has tweeted about Jewish holidays. He even went on a Birthright-style trip to Israel, and has written a children’s book that references modern-day Zionism founder Theodor Herzl. After the Pittsburgh synagogue shooting in the fall that killed 11, he wore special cleats with Hebrew on them to honour the victims.

His is the quintessential surprise story: Undersized at 5ft 10 and less than 200 pounds, without blazing speed, Edelman was picked toward the end of the last round of the 2009 draft, but he didn’t make headlines until 2013.

For those unfamiliar with the Super Bowl, here is some information from Wikipedia:

The day on which the Super Bowl is played, now considered by some as an unofficial American national holiday,[1][2] is called “Super Bowl Sunday“. It is the second-largest day for U.S. food consumption, after Thanksgiving Day.[3] In addition, the Super Bowl has frequently been the most-watched American television broadcast of the year; the seven most-watched broadcasts in U.S. television history are Super Bowls.[4] In 2015, Super Bowl XLIXbecame the most-watched American television program in history with an average audience of 114.4 million viewers, the fifth time in six years the game had set a record, starting with Super Bowl XLIV, which itself had taken over the number-one spot held for 27 years by the final episode of M*A*S*H.[5][6][7] The Super Bowl is also among the most-watched sporting events in the world, almost all audiences being North American, and is second to the UEFA Champions League final as the most watched annual sporting event worldwide.[8]

Because of the high viewership, commercial airtime during the Super Bowl broadcast is the most expensive of the year, leading to companies regularly developing their most expensive advertisements for this broadcast. As a result, watching and discussing the broadcast’s commercials has become a significant aspect of the event.[9] In addition, popular singers and musicians including Mariah Carey, Michael Jackson, Madonna, Prince, Justin Timberlake, Beyoncé, Janet Jackson, Paul McCartney, The Rolling Stones, The Who, Whitney Houston, and Lady Gaga have performed during the event’s pre-game and halftime ceremonies.