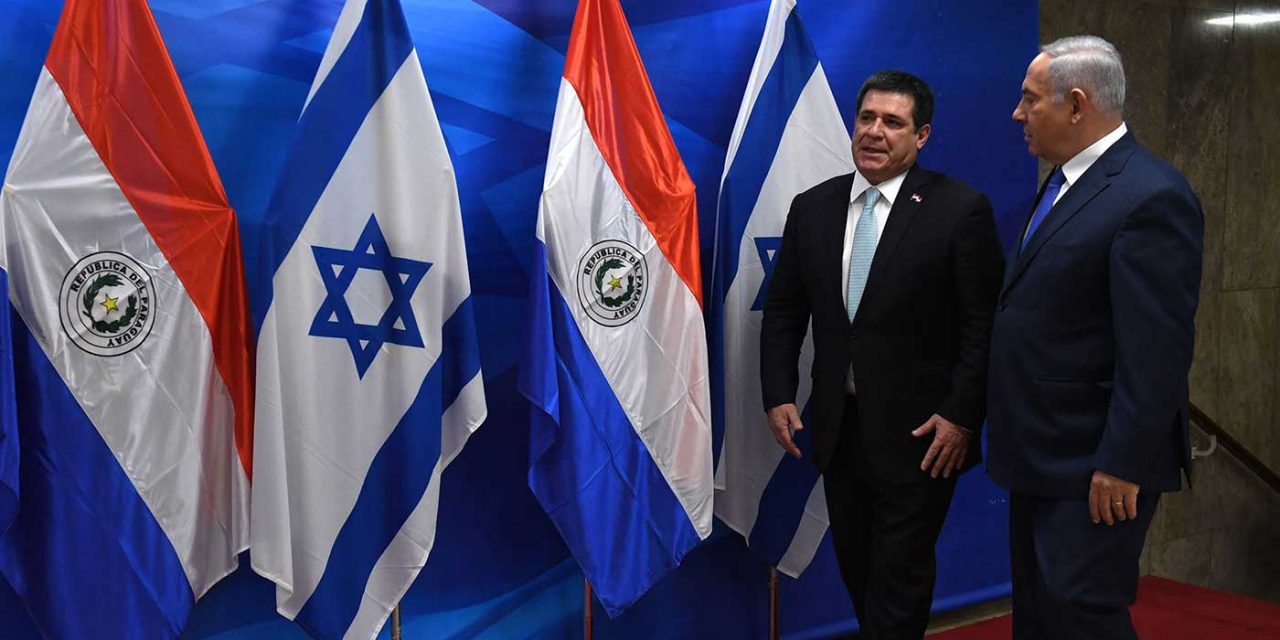 Israeli Prime Minister Benjamin Netanyahu attended his third embassy opening ceremony in Jerusalem in a week as Paraguay opened its embassy this morning, following the USA and Guatemala moving their embassies last Monday.

Paraguayan President Horacio Cartes, who arrived in Israel Sunday evening, opened the embassy along with Netanyahu in the Malha Technological Park, the same building in which Guatemala has opened its embassy.

Cartes said the embassy opening “expresses the sincere friendship and brave solidarity” between the two countries. He praised Israel for courageously defending its right to live in peace, and for “building a praiseworthy economically prosperous state that ensures its future and that of its children.”

Cartes was the first Paraguayan leader to visit Israel when he came in 2016. A year later, he travelled to Buenos Aires to meet Netanyahu, who was visiting Argentina on the first ever visit by a serving Israeli prime minister to Latin America.

Netanyahu, who called Cartes “a great friend of Israel and a great personal friend of mine,” said that Cartes – who will be leaving office in August – has “done much” for Paraguay, and is now “doing something for both our countries.”

He also recalled that Paraguay helped Jews escape Nazi Germany both before and during the Holocaust, and also took in refugees after the war.

“It was an act of benevolence and mercy that is forever etched in our hearts,” he said.

PM Netanayhu: @Horacio_Cartes Jara, thank you. Thank you my friend for making this bold decision to move your embassy to Jerusalem. You said you will do it, like someone else I know, like @POTUS Trump. You said you'd do it and you did it. Thank you. pic.twitter.com/FT8WUrgNKT

Netanyahu made a point that Paraguay had supported the establishment of Israel during the partition vote in the UN in 1947. “Paraguay, before but especially under your leadership, took a very bold stance in international affairs and refused to cooperate with the lies directed against Israel,” Netanyahu said.