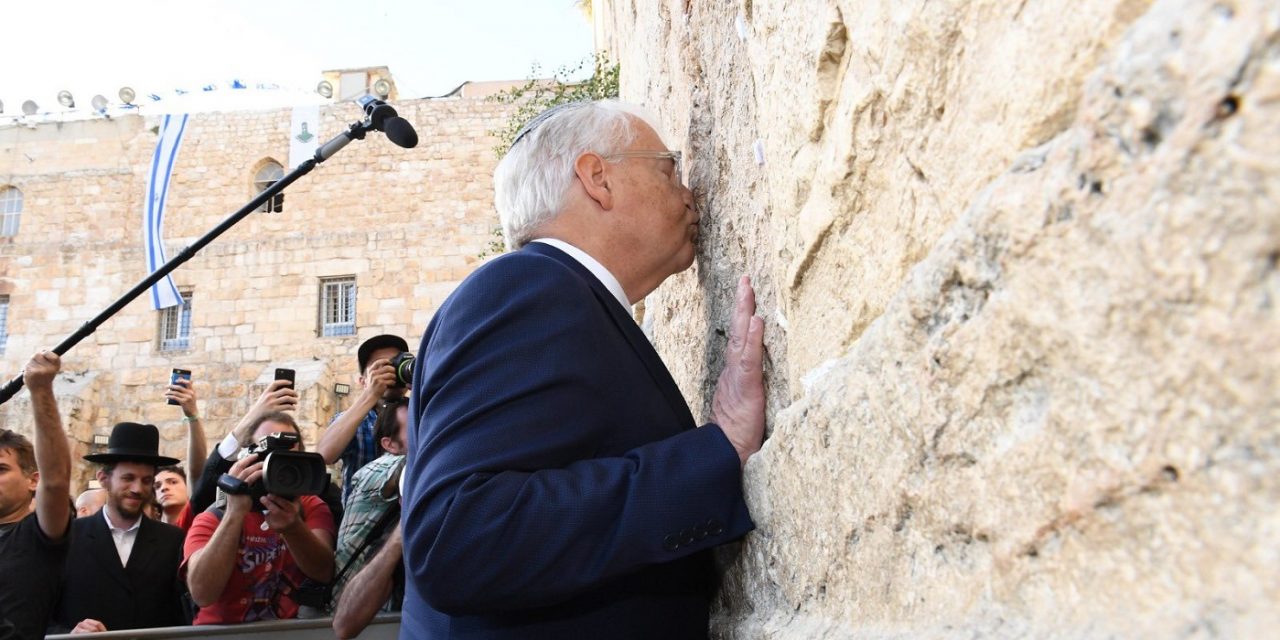 US Ambassador to Israel, David Friedman, completed his tenure this week in a visit to the Western Wall, the same way he began his diplomatic mission when arriving in Israel three and a half years ago.

During his time visiting the holy site, Friedman recited a psalm of gratitude in front of the Western Wall stones, and spoke of the importance of Israel to him, particularly Jerusalem.

Ambassador Friedman’s achievements have been praised by friends of Israel across the globe this week, including by CUFI Founder and Chairman, Pastor John Hagee. In a letter to the Ambassador, Pastor Hagee said his legacy “is marked by one success after another, by righting historic wrongs, and by helping to bring US policy in the Middle East in line with our highest moral aspirations.”

Posted by Christians United for Israel (CUFI) on Tuesday, January 19, 2021

I’m ending my diplomatic mission the way I started: at the Western Wall praying for my family & for the United States, Israel and their unbreakable bond. pic.twitter.com/428ONk1y6a

Last week the Knesset, Israel’s parliament, honoured Ambassador Friedman for his tenure under the Trump administration.

Zvi Hauser, chairman of the Knesset’s Foreign Affairs and Defense Committee, thanked Friedman for his “extraordinary contribution to strengthening the ties between the United States and the State of Israel.”

Hauser said Friedman was given the task of “fulfilling the dreams of all of us, changing historical distortions, and actually realizing the traditional position of the United States and its historical vision that the capital of the Jewish people in the Land of Israel is Jerusalem.”

JNS also reports that Knesset Speaker Yariv Levin also thanked the outgoing envoy and noted his contributions, including increased security coordination, recognition of Jerusalem as the capital of Israel, relocation of the U.S. embassy to Jerusalem and recognition of Israeli sovereignty in the Golan Heights.

Friedman thanked the Knesset committee, saying his three-and-a-half years in Jerusalem “flew by like a flash”—a testament “to how exciting, riveting and enjoyable the job was.”

The departing envoy also noted how the U.S. recognition of Jerusalem as Israel’s capital in December 2017 led to major shifts in the Middle East.

“Everyone feared that the recognition of Jerusalem would lead to an explosion, but it turned out to be an explosion of peace and not of violence,” he said, referring to the Abraham Accords that have led to the normalization of ties between Israel and several Gulf states.