OPINION: How “independent” was Shami Chakrabarti’s report into anti-Semitism?

In April, Shami Chakrabarti was chosen by Jeremy Corbyn to lead an independent inquiry into anti-Semitism in the Labour Party. In her own words Ms Chakrabarti stated that she considers herself to be “independent” and would investigate “without fear or favour”. However, her actions are showing she may not be as “independent” or “without favour” as many had hoped.

The report was released on Thursday, 30 June 2016 and the outcome was as expected. In short, Ms Chakrabarti comes to the conclusion that Labour does not have a problem with anti-Semitism.

No one wants the Labour Party to have a problem with anti-Semitism, we want it to be anti-Semitism free. However, saying there is not a problem when quite clearly there is, is not helpful.

On Monday, Jeremy Corbyn faced a 90-minute Parliamentary grilling about anti-Semitism in the Labour Party and one of the first things Corbyn had to answer for was his apparent anti-Semitic slur which he made on Thursday when he welcomed the findings of the report. In a speech where he said Jewish people were “no more responsible” for the Israeli government than Muslims are for “various self-styled Islamic states or organisations.”

As a result of these words, many accused him of linking Israel to ISIS, a claim that was blasted as “deliberate misrepresentation” by Shami Chakrabarti, the “independent” person who wrote the report.

At the hearing on Monday, Mr Corbyn was given the opportunity to clear up these accusations and he did so saying the following, “At no stage did I make that comparison,” he said. “I’m disappointed that reference was made by the Chief Rabbi or anybody else.”

“What Shami Chakrabarti says in her report and I endorse is that because somebody is Jewish, they shouldn’t be expected to have special knowledge or support or opposition to the state of Israel and its activities – any more than somebody who is a Muslim should be expected to have special knowledge, support or condemnation of the government of say Saudi Arabia, Iran or Pakistan.

That is all well and good, but he did not make reference to those countries in his speech. He clearly used the words, “self-style Islamic states”. To most people this would mean ISIS, but nevertheless, a ‘self-styled’ group is not a country. Also, it would be more appropriate to say “Muslim” rather than “Islamic”.

Page 10 of the actual report written by Ms Chakrabarti, which Corbyn used and endorsed in his defence doesn’t say “Islamic states” or “Islamic countries”, it clearly says “ISIS”.

The “independence” of Ms Chakrabarti was questionable during the panel hearing. She was sat behind the Labour leader to his right, and was seen constantly making expressions and gestures which showed her supporting the Labour leader. More telling than that was the fact that she was told off for passing notes to Mr Corbyn and whispering to him to help him answer questions at the hearing. 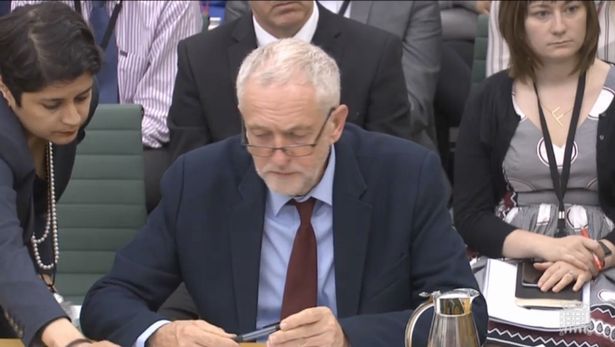 It is quite remarkable to think that someone who is “independent” and “without favour” is clearly doing her best to help fight any allegations of anti-Semitism that are levied against Jeremy Corbyn.

How can an independent inquiry be carried out by someone who is actively and publicly defending the leader of the party she is supposed to be investigating? Surely this kind of action brings into question the validity of such an “independent” inquiry.