On the same day that Israel is bombarded with rockets, the EU passes discriminatory food labelling laws against Israel 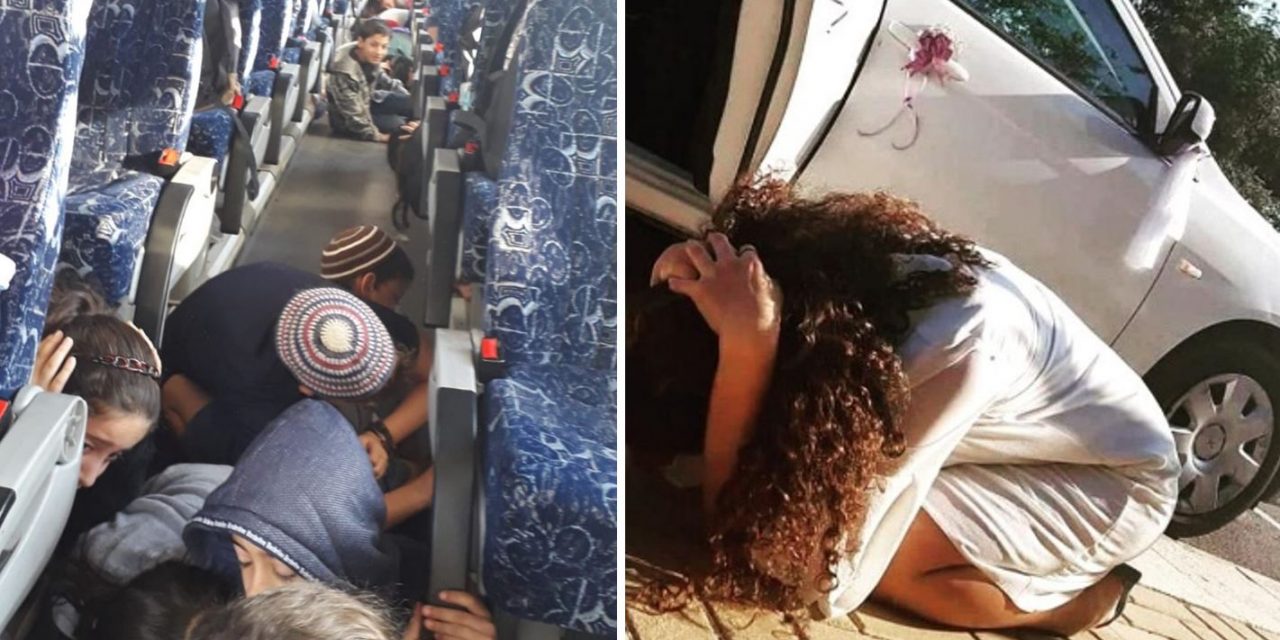 In the past 30 hours over 220 rockets were fired at Israeli civilians from Gaza targeting more than 110 cities, towns and communities across Israel.

Remarkably, the IDF were able to intercept 90% of rockets launched into Israel, however over 40 Israelis have been injured, two wounded directly by rocket fire; 23 lightly injured and another 23 hospitalised with anxiety and other stress symptoms. An 8 year-old-girl is in a serious condition after suffering a heart attack while hiding in a bomb shelter.

From Tel Aviv to Sderot, schools were cancelled and workers were told to stay home. And as the photo above shows, no bride should be forced to take cover from rockets on her wedding day.

Palestinian Islamic Jihad, a Gaza-based terror group that is funded directly by Iran, is responsible for the attacks. It follows Israel’s targeted killing of one of its senior terror commanders, Baha Abu Al-Ata, in a defensive counter-terrorist operation. Al-Ata had coordinated countless terror attacks as recently as last week and was planning more attacks against Israel.

In the past 24 hours, Israel has destroyed important Islamic Jihad targets in response, however indiscriminate rocket fire from terrorists in Gaza resumed on Wednesday. These terrorists are committing double war-crime: firstly by targeting tens of thousands of Israeli civilians and also by launching rockets from within Gaza’s civilian neighbourhoods.

Meanwhile at the European Court of Justice, as rockets were raining down on Israeli citizens, the EU approved discriminatory legislation against Israel that requires EU countries to label Israeli goods made in Judea and Samaria as well as The Golan. The European Court of Justice (ECJ) said that “foodstuffs originating in the territories occupied by the State of Israel must bear the indication of their territory of origin.”

Despite there being over 200 ongoing territorial disputes around the world, the EU has never rendered a single ruling on these territories until yesterday’s singling out of Israel. This political and discriminatory action is not only a double standard, but also plays into the hands of anti-Israel groups that call for boycotts against Israel and deny its right to exist.

Israel’s Ambassador to the UN, Danny Danon, summarised the situation perfectly in a Tweet on Tuesday, saying, “Attacks against Israel come in many forms. Today alone, we saw rockets fired from Palestinian Islamic Jihad in Gaza & an EU court decision discriminating against products made in Judea & Samaria, & Golan Heights. Both are efforts to weaken the Jewish State. Both will be overcome!”

Speaking about the rocket attacks against Israel, Prime Minister Netanyahu had a message of defiance: “We are determined to fight to defend our country and if they [Islamic Jihad] think that these barrages or these strikes will weaken us or lessen our determination, they are mistaken,” he said, “Therefore, they have but one choice – to stop these attacks or take more and more blows. The choice is theirs.”

Netanyahu added, “Together we will continue to do everything that needs to be done to defend the security of the State of Israel and its citizens. Together we will be victorious.”

Whether it is bias against Israel at the EU or UN, or terrorists firing rockets into Israel, we must recognise that the battle rages on multiple fronts. Israel has an obligation to defend itself and its citizens and the vain threats to the Jewish people’s legitimate right to live peacefully in the Land God gave them must be confronted. We ask you to join us in fulfilling the Biblical command to be ‘Watchmen on the Walls’ by praying for Israel and remaining vigilant at this time when Israel needs our support on so many fronts.