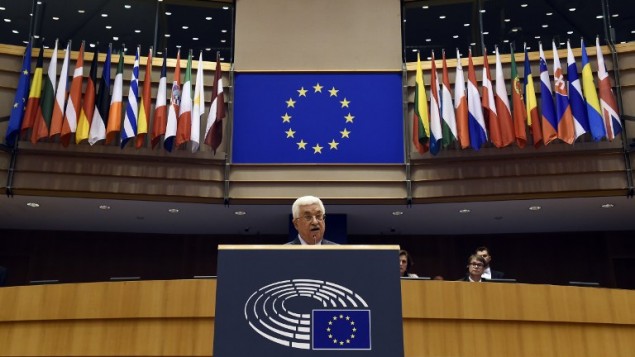 As Britain was voting in the EU Referendum, Palestinian leader Mahmoud Abbas received a standing ovation during an anti-Semitic, libel speech at the European Parliament

Abbas blamed Israel for global terrorism and repeated a discredited canard that Jews are seeking to poison Palestinian water in Thursday’s speech.

Abbas also refused to meet Israeli President Rivlin while both men were in Brussels.

In his speech that was full of inaccuracies and blatant lies, Abbas asked the EU to save the Palestinians from Israeli provocations, and cited as evidence a hoax story about rabbinic calls for Jews to poison Palestinian wells. The discredited charge, propagated by the PA’s Foreign Ministry’s earlier this week, was attributed to an Israeli rabbi and a council that do not actually exist. It was rejected by the group Breaking the Silence, which some Turkish and Arabic media cited as the source for the story. Canards about rabbis authorizing the poisoning of wells have been used to incite violence against Jews since the Middle Ages.

Abbas also alleged that Israel is the cause of global terror, saying, “Once the occupation ends, terrorism will disappear, there will be no more terrorism in the Middle East, or anywhere else in the world.”

The Palestinian president refused to meet with Rivlin during his visit to Brussels, despite EU encouragement. Rivlin, who agreed to meet and reiterated the importance of direct talks to peace efforts, said that he found Abbas’ rejection odd. “On a personal level, I must say that I find it strange that President Mahmoud Abbas, my friend Abu Mazen, refused again and again to meet with Israeli leaders and turns again and again to the support of the international community,” he said. “We can talk. We can talk directly in a way to build confidence.”