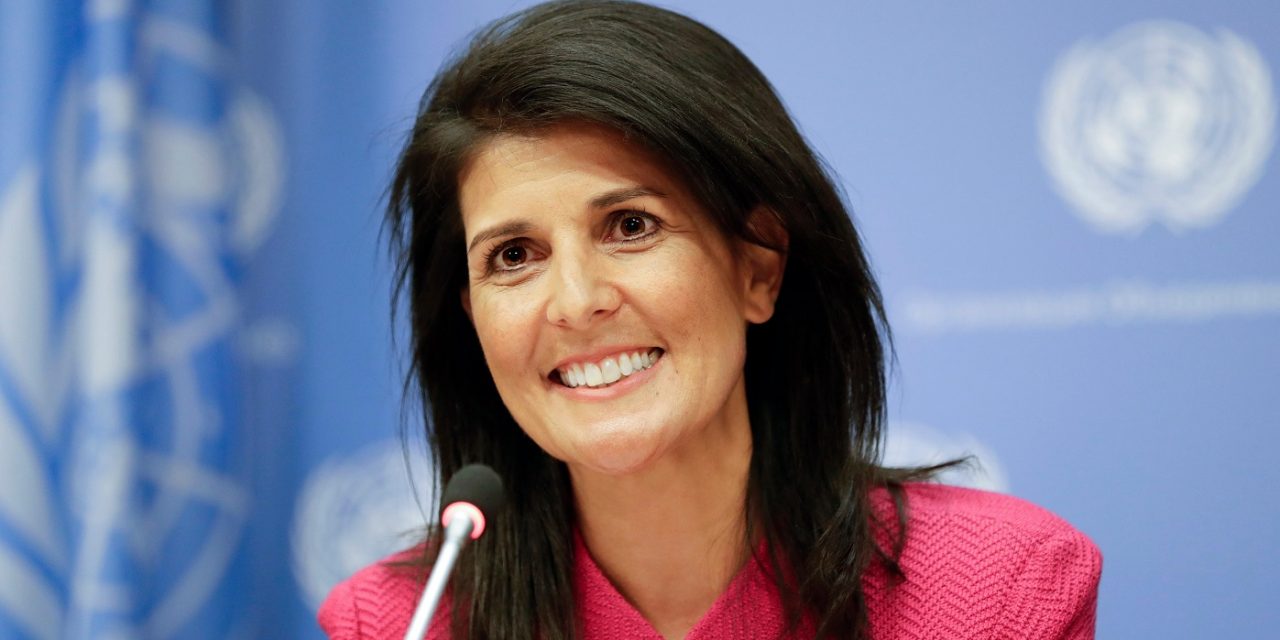 US Ambassador Nikki Haley has urged the UN Security Council on Wednesday to adopt the Trump administration’s comprehensive approach to Iran and address all aspects of its “destructive conduct” — not just the 2015 nuclear deal.

She told the council that Iran “has repeatedly thumbed its nose” at council resolutions aimed at addressing Iranian support for terrorism and regional conflicts and has illegally supplied weapons to Yemen and Hezbollah militants in Syria and Lebanon.

“Worse, the regime continues to play this council,” Haley said. “Iran hides behind its assertion of technical compliance with the nuclear deal while it brazenly violates the other limits of its behavior, and we have allowed them to get away with it.”

“This must stop,” she said.

Haley cited a long list of Iranian violations, including threatening freedom of navigation in the Gulf, cyber-attacks, imprisonment of journalists and other foreigners, and abuses of its people by persecuting some religions and imprisoning gays and lesbians.

She called Iran’s “most threatening act its repeated ballistic missile launches including the launch this summer of an ICBM enabling missile.”

“This should be a clarion call to everyone in the United Nations,” Haley said.

“When a rogue regime starts down the path of ballistic missiles, it tells us that we will soon have another North Korea on our hands,” she said. “If it is wrong for North Korea to do this, why doesn’t that same mentality apply to Iran?”

Haley said the Security Council has the opportunity to change its policy toward Iran.

“I sincerely hope it will take this chance to defend not only the resolutions but peace, security and human rights in Iran,” she said.

“Judging Iran by the narrow confines of the nuclear deal misses the true nature of the threat,” Haley stressed. “Iran must be judged in totality of its aggressive, destabilizing and unlawful behavior. To do otherwise would be foolish.”

Haley spoke shortly after Israel’s ambassador to the UN, who told the Security Council said Iran supports terrorism across the globe and grossly violates human rights of its own people.

There “is no refuge from Iran’s deadly deeds,” Danny Danon said. Iran, “whose cause is terror,” is funding terrorism all over the world, Danon charged.

“When terror strikes, a trail of bloody footprints so often traces back to Iran,” Danon said. “From Bangkok to Burgas, from Buenos Aires to Beirut, and all the way back to Tehran.”

“The Islamic Republic of Iran must be found guilty on all accounts,” he said. “You do not need to do this for Israel’s sake. If we are attacked by Iran the regime will face no fiercer enemy than Israel. It is the innocent people around the world who need you to act.”