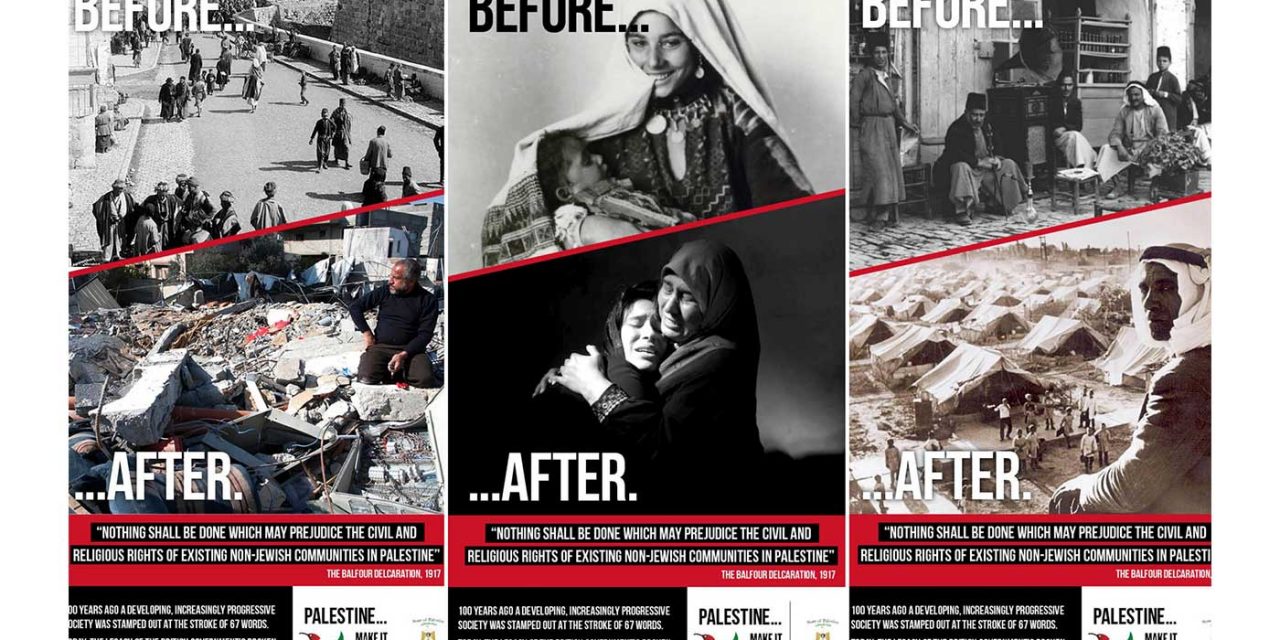 Transport for London (TfL) has banned a Palestinian poster campaign on the London underground that was anti-Israel and against the Balfour Declaration.

The poster campaign, titled “Make It Right” was organised by the Palestinian Authority (PA) representative to the UK.

TfL rejected the adverts because they “did not comply fully with our guidelines,” a spokesman said. Clause 2.3(h) refers to “images or messages which relate to matters of public controversy or sensitivity”. TfL also bans causes that are “party political”.

However, the posters for the ‘Make It Right’ campaign will still be displayed on taxis, which are subject to less stringent advertising rules.

The taxis are expected to drive around events organised by those celebrating the centenary, including Christian Zionists, who are organising a rally at the Royal Albert Hall.

And yes, we at Christians United for Israel will be celebrating the Balfour Declaration at the Royal Albert Hall, so please join us, you can purchase tickets here.

Manuel Hassassian, the Palestinian ambassador to the UK, accused TfL of censorship.

Hassassian said in a statement: “Palestinian history is a censored history. There has been a 100-year-long cover-up of the British government’s broken promise, in the Balfour declaration, to safeguard the rights of the Palestinians when it gave away their country to another people. TfL’s decision is not surprising as it is, at best, susceptible to or, at worst, complicit with, all the institutional forces and active lobby groups which continuously work to silence the Palestinian narrative. There may be free speech in Britain on every issue under the sun but not on Palestine.”

Hassassian has previously spoken out against Britain’s support for the Balfour Declaration calling it “a badge of dishonour” to Britain. Last year he prompted walkouts from Jewish members at a Labour meeting after he called Israelis “cancer”. His words were not challenged by the Labour MPs present.

However, despite Palestinian outrage, in April the UK officially refused to apologise for the Balfour Declaration, which recognised the legitimacy of establishing “a national home for the Jewish people” in the British mandate of Palestine.

“The Balfour Declaration is an historic statement for which HMG (her Majesty’s Government) does not intend to apologise,” the UK Foreign Office stated in response to a petition by the Palestinian Return Centre urging an official apology from the UK. “We are proud of our role in creating the State of Israel.”

The Balfour Declaration, signed by the Foreign Secretary at the time, Arthur Balfour, declared “the establishment in Palestine of a national home for the Jewish people” on 2 November 1917. It officially became part of international law when the League of Nations adopted it in 1922.

“Establishing a homeland for the Jewish people in the land to which they had such strong historical and religious ties was the right and moral thing to do, particularly against the background of centuries of persecution,” the statement added.

Click here to celebrate the Balfour Declaration at the Royal Albert Hall.