Nikki Haley: “Chief Culprit” in the Middle East is Iran, not Israel 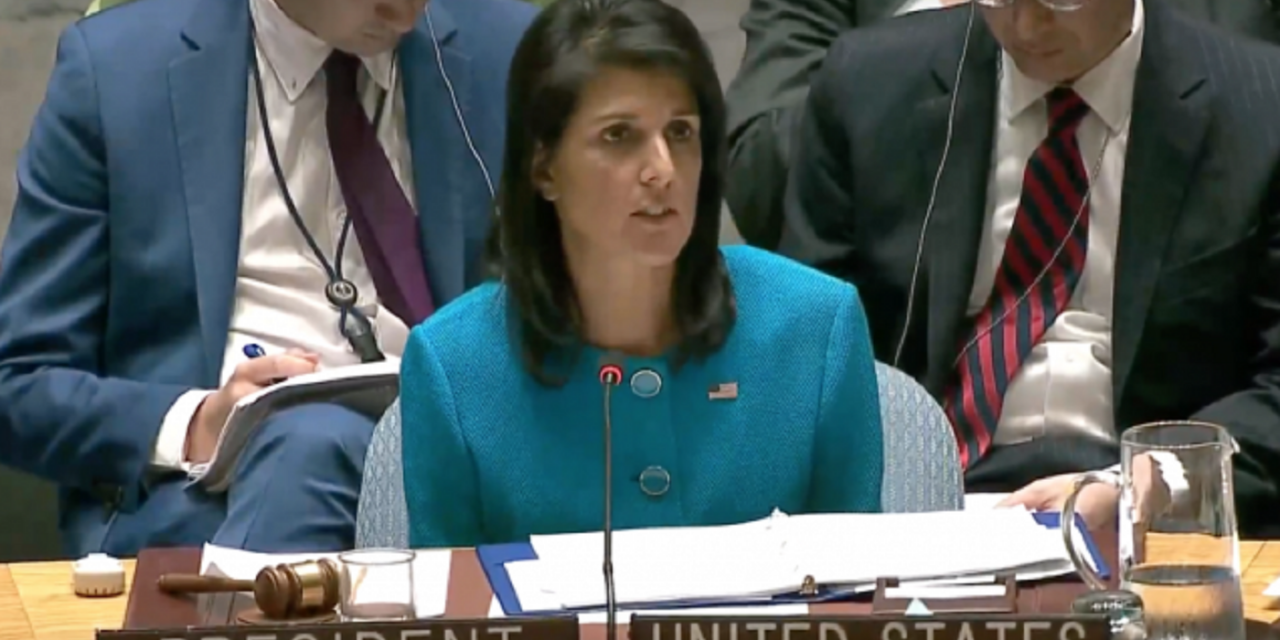 It’s high time the United Nations Security Council set its sights on Iran, rather than Israel, United States Ambassador to the UN Nikki Haley said Thursday during the Security Council’s monthly meeting on “the Situation in the Middle East, including the Palestinian question.”

“Every month the Security Council convenes a meeting on the Middle East. We have lots of meetings on specific countries and conflicts in this region but this debate is our opportunity to talk about the Middle East as a whole. Regrettably, these monthly meetings routinely turn into Israel-bashing sessions. That’s the way the Security Council has operated for years. It’s a formula that is absurdly biased against one country. It’s a formula that is painfully narrow in its description of the conflicts in the region,” said Haley, who is this month’s president of the Security Council.

In her remarks before the 15-member council, Haley condemned Iran, which she said is responsible for regional tumult, from meddling in Yemen and Syria, to its support of Hezbollah.

“Iran is using Hezbollah to expand its regional aspirations. That is a threat that should be dominating our discussions at the Security Council,” she said.

Since Haley assumed her post in January with the promise that there “is a new sheriff in town,” she has repeatedly chastised the UN for what she says is its Israel obsession and anti-Israel bias.

Israel’s Ambassador to the UN Danny Danon, who also addressed the meeting, welcomed Haley’s efforts to redirect the council’s attention. Like Haley, Danon spoke out against what he said was increased Iranian aggression in the region.

“Where there is terror, where there is death, there is Iran. Teheran is an accomplice in the atrocities taking place every single day in Syria. The Iranian proxy Hezbollah places its weapons in homes, mosques and hospitals in Lebanon, and in Gaza, Hamas has spent millions of Iranian dollars on rockets, guns and digging terror tunnels,” he said.

Moreover, Danon told the council, Iran not only threatens the region through proxies, it threatens the region directly with its continued ballistic missile tests, “which are in direct defiance this Council…The Iranians have not hidden their intentions. Just two days ago they wrote on one of their missiles: ‘Death to Israel.’”

Perhaps in a sign that Haley’s suggestion is being heeded, Nickolay Mladenov, the UN’s special coordinator for the Middle East peace process, expanded the scope of his remarks beyond the Palestinian-Israeli conflict to include Syria, the millions of displaced, Hezbollah and the Islamic State group.

“Today a perfect storm has engulfed the Middle East and continues to threaten international peace and security. Millions have been displaced in the biggest refugee crisis since the Second World War. In many countries, societies have fractured along ethnic or religious lines. Non-state actors have taken control of territory, and terror attacks have spread indiscriminately striking civilians of all origin and confession,” Mladenov said.

The Palestinian Permanent Observer to the UN Riyad Mansour said “the Palestinian-Israel conflict is about the denial of a people’s unalienable right to freedom. It is not a conflict arising out of incitement for terror.”

The Ukrainian ambassador, Volodymyr Yelchenko, made brief remarks about the Palestinians and Israel, repeating Haley’s assertion that peace would only be achieved through direct negotiations, before going on to discuss IS and Syria.

Haley’s effort to redirect the council’s gaze faces the opposition of many council members — including France, Russia and Sweden — which ignored her rebuke and spent the majority of their floor time speaking about the Israeli-Palestinian conflict.

Additionally, any resolution against Iran would likely not pass as Russia, which is closely aligned with Iran, is one of five permanent members that hold veto power in the Security Council.