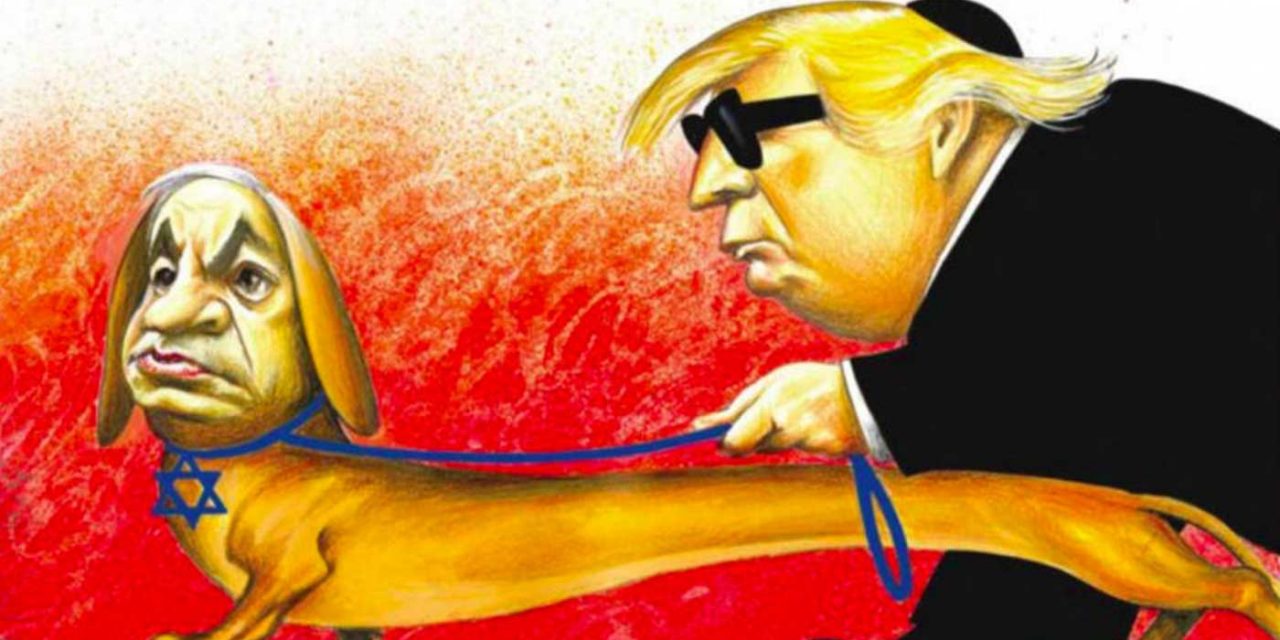 The New York Times International Edition ran a cartoon on Thursday of an apparently blind US President Donald Trump wearing a yarmulke being led by a dog with a Star of David for a collar and the face of Prime Minister Benjamin Netanyahu.

In the NYTimes international: Bibi Netanyahu characterized as a dog leading a blind, Jewish Trump.
When did the @nytimes hire David Duke as an editor? pic.twitter.com/7bGf1jLrri

The cartoon, condemned by numerous people in the last few days,  appeared in the April 25 edition and was available in Israel on the weekend edition issued for the seventh day of Passover followed by Shabbat, two days when observant Jews were not active online.

“Another disgusting display of vile antisemitic trope celebrated in The NY Times World. The NY Times is signalling to the world that antisemitism is real, here and welcome,” wrote philanthropist Adam Milstein.

Imam Mohamad Tawhidi condemned the cartoon on social media, saying it was reminiscent of antisemitic Islamist texts comparing Jews and dogs. Others noted that while it had appeared online, it had been removed by Saturday afternoon. The New York Times Opinion Twitter account included an editor’s note that said the cartoon “included antisemitic tropes.”

The US President’s son, Donald Trump Jr, slammed the image as “Disgusting,” he tweeted. “I have no words for flagrant anti-Semitism on display here. Imagine this was in something other than a leftist newspaper?”

Disgusting. I have no words for flagrant anti-Semitism on display here. Imagine this was in something other than a leftist newspaper? https://t.co/3t47DW9OCB

Trump Jr. is not the only son of the two world leaders in the cartoon who spoke out.  Netanyahu’s son, Yair, slammed the New York Times over the depiction.

“No one should be surprised by the vile, anti-Semitic cartoon published in New York Times,” the younger Netanyahu told Breitbart News on Saturday.

Yair charged The Times “has always been an anti-Israel newspaper, and yes, anti-Jewish too.”

Netanyahu referred, among other things, to The Times’ controversial World War II treatment of reports that Adolph Hitler was methodically murdering the Jews of Europe, with the newspaper at the time infamously relegating the few reports it carried on the Holocaust to the back pages.

“During World War II, the newspaper deliberately hid from the American public news dispatches about the extermination of millions of Jews in Europe,” Yair Netanyahu charged.

Netanyahu pointed out that extensive coverage of Hitler’s atrocities against Jews may have prompted the American public to “demand that the government take steps to help the Jews…actions like bombing the death camps and railways could have saved millions of lives.”

“It’s no surprise that the New York Times so strongly opposes President Trump’s brave decisions to recognize Jerusalem as Israel’s capital and declare the Golan Heights as part of Israel,” Netanyahu added.

On Saturday, The Times released a response to the cartoon that notably did not include an apology.

A political cartoon in the international print edition of The New York Times on Thursday included anti-Semitic tropes, depicting the prime minister of Israel as a guide dog with a Star of David collar leading the president of the United States, shown wearing a skullcap. The image was offensive, and it was an error of judgment to publish it. It was provided by The New York Times News Service and Syndicate, which has since deleted it.

Following widespread outcry, The Times on Sunday released an updated statement saying the newspaper is “deeply sorry” for the anti-Semitic cartoon.

We apologize for the anti-Semitic cartoon we published. Here’s our statement. pic.twitter.com/nifZahutpO