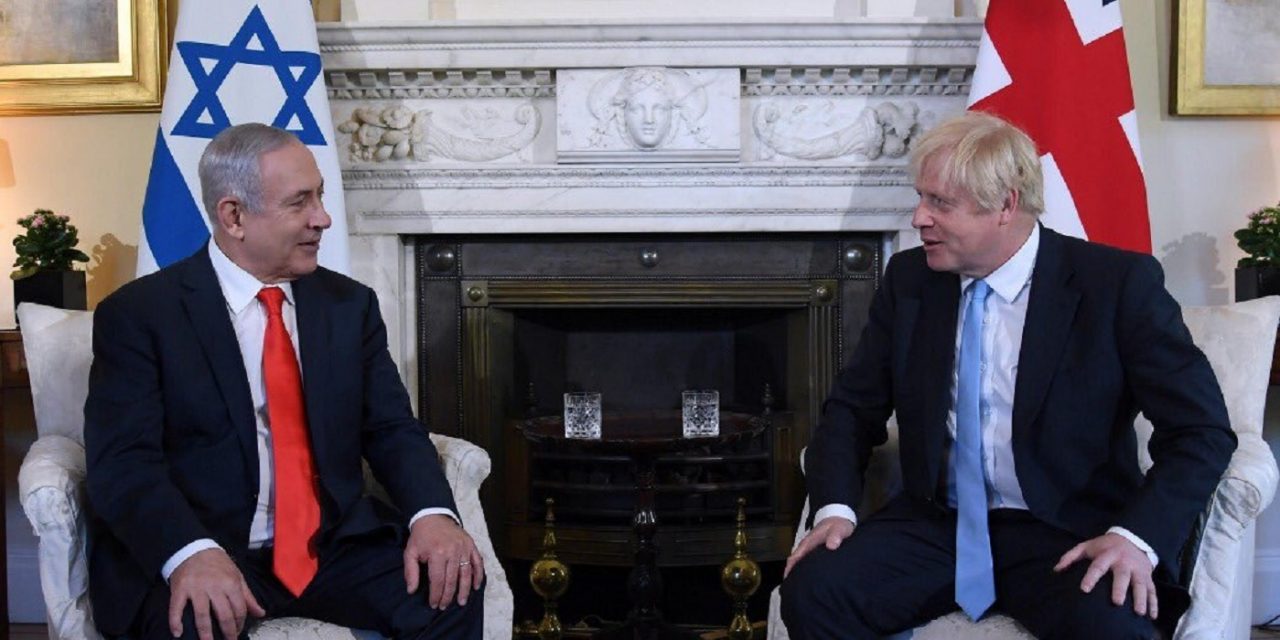 Prime Minister Netanyahu made an unexpected visit to Downing Street today in Boris Johnson’s first meeting with the Israeli PM since taking office.

Netanyahu and Boris spent an important 30 minutes together with the Israeli PM’s brief visit to London demonstrating the close bond between the two countries at a time of increasing tensions in the Middle East. Following the meeting, Netanyahu met with the UK Defence Secretary.

“I want to say that you’ve been a great friend of the Jewish people and Israel,” Netanyahu told Johnson inside Number 10, “I applaud your staunch stance against anti-Semitism and your support for Israel’s security.”

“Our relations are at an all-time high: economically, trade, technology, defense cooperation. These are all great things.

“It’s not that we lack challenges. We have the challenge of Iran’s aggression and terrorism, and I’d like to talk to you about how we can work together to counter these things for the benefit of peace. And I want to thank you for this opportunity to do so”

Prime Minister Benjamin Netanyahu met today with British Prime Minister Boris Johnson, at 10 Downing st. in London."Boris, it's always a pleasure to see you, but especially now in your role as Prime Minister. I want to say that you've been a great friend of the Jewish people and Israel. I applaud your staunch stance against antisemitism and your support for Israel's security. Our relations are at an all-time high: economically, trade, technology, defense cooperation. These are all great things. It's not that we lack challenges. We have the challenge of Iran's aggression and terrorism, and I'd like to talk to you about how we can work together to counter these things for the benefit of peace. And I want to thank you for this opportunity to do so".Video: Omer Miron, GPOSound: Nir Sharf, GPO

Posted by The Prime Minister of Israel on Thursday, 5 September 2019

Related article: The Watershed moment for Britain’s stand with its allies

Later on Thursday, Netanyahu met with Britain’s Secretary of State for Defence, Ben Wallace, and US Secretary of Defense Mark Esper, who is also in London, “to discuss matters of national security,” the Israeli Embassy in London said. US Vice President Mike Pence is also in the capital today meeting Mr Johnson, but no meeting had been scheduled as of Thursday afternoon.

Earlier in the day whilst boarding the plane at Tel Aviv, Netanyahu told said, “This morning we were informed of another violation, more defiance, by Iran, this time in its striving to attain nuclear weapons.

“This joins Iran’s aggressive acts against international shipping and against countries in the region, as well as its efforts to carry out murderous attacks against the State of Israel, efforts that have not ceased.

PETITION: We call for the UK to withdraw from the Iran Deal

Reiterated in a Tweet, Netanyahu continued, “This is not the time to hold talks with Iran; this is the time to increase the pressure on Iran.”

“I will discuss all of these issue, and others, with British Prime Minister @BorisJohnson and @EsperDoD during my snap visit to London.  These are important matters for the State of Israel at all times, but especially now.”

The Israeli PM was expected to discuss with Johnson the current crisis in the Gulf, where British ships are currently securing waters for continued Iranian aggression. Meanwhile, the UK remains one of the signatories of the 2015 Iran nuclear deal, despite the Iranian regime breaching the agreement, and comes amid France’s proposal to offer Iran a $15 billion credit plan.