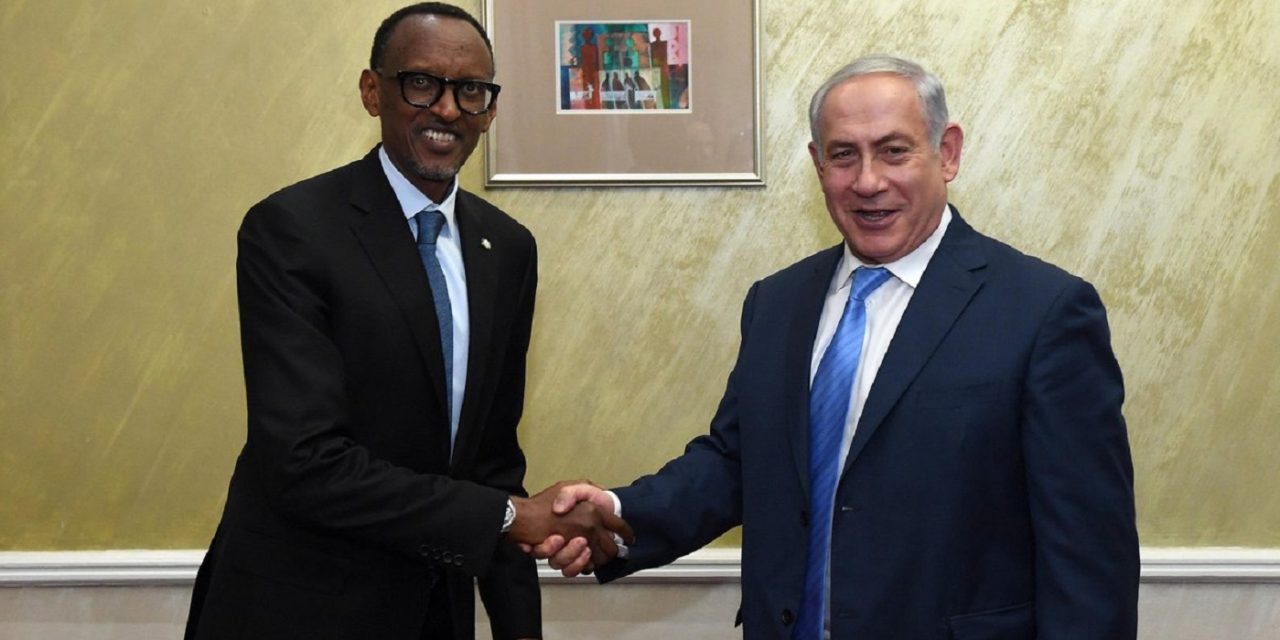 Prime Benjamin Netanyahu on Tuesday met with Rwandan President Paul Kagame while in Nairobi, Kenya, and informed him that Israel will be opening an embassy in the Rwandan capital Kigali.

“We are opening a new embassy in the Rwandan capital Kigali as part of Israel’s expanding presence in Africa and the deepening of cooperation between Israel and the countries of Africa,” Netanyahu stated.

The two leaders also discussed the possibility of opening a direct air link between the two countries.

This is Netanyahu’s third visit to Africa in 18 months, and his second visit to Kenya, where he is attending the inauguration of Kenyan President Uhuru Kenyatta. He was last there in July 2016 and has made improving relations with African nations a priority.

PM Netanyahu met with Rwandan President Kagame and informed him that Israel will be opening an embassy in Kigali.
"We are opening a new embassy in Kigali as part of Israel's expanding presence in Africa and the deepening of cooperation between Israel and the countries of Africa." pic.twitter.com/hbZHmrKemR

During a celebratory lunch at the Presidential Palace, Netanyahu told the African leaders in attendance that Israel would like to help bring electricity to Africa. Netanyahu told the gathering, “We would like to work with you and with every one of your countries to electrify Africa. We believe in Africa. So for every, every one of your initiatives, there will be an initiative on our part to seize the future, to make life better and safer for your people.

Prime Minister Netanyahu has already met on the sidelines with the presidents of Gabon, Uganda, Tanzania, Zambia, Rwanda, South Sudan, Botswana and Namibia, and with the Prime Minister of Ethiopia.

Netanyahu called on the African leaders to “contend with the various challenges facing the region, including Islamic terrorism. “If we work together we will defeat the barbarians. Our people deserve better, we can provide it for them,” Netanyahu said.

Netanyahu also related to Israel’s attempt to become and observed to the African Union. “I hope that we will all find a way to have Israel become an observer status in the African Union because we can help, we can not only observe, we can help build together a better future for Africa. This is our goal,” Netanyahu concluded.

I have arrived to Nairobi, the capital of Kenya. It was exciting to hear our national anthem, Hatikvah. Thank you for the warm welcome! 🇮🇱🇰🇪 pic.twitter.com/71LrOnFKQp

Netanyahu also met on the sidelines with the presidents of Gabon, Uganda, Tanzania, Zambia, Rwanda, South Sudan, Botswana and Namibia, as well as with the Prime Minister of Ethiopia.

In his address to AIPAC last March, Netanyahu observed that Israel has “diplomatic relations with 161 countries, more than at any time in our history.”

Last July, he made a historic trip to East Africa, where he visited Uganda, Kenya, Rwanda and Ethiopia. Weeks later, the Republic of Guinea, a Muslim-majority African nation, restored diplomatic ties with Israel after a 49-year break.

Israel has a long history of sharing its expertise with African countries, and Jerusalem hopes that stronger ties will lead to a shift in voting trends at the UN and other global forums, thus reversing what Netanyahu has labeled the “automatic majority against Israel.”