Macron tells Netanyahu: US embassy move was not cause for “celebration” 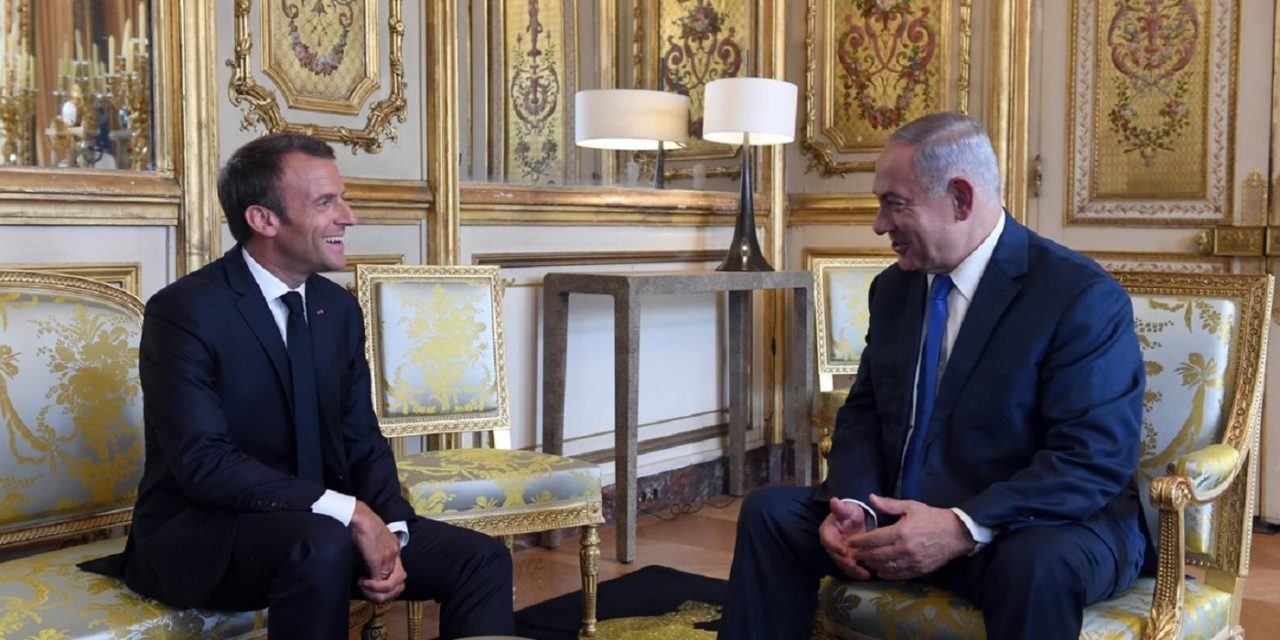 At a press conference held for Israeli Prime Minister Benjamin Netanyahu and French President Emmanuel Macron, the French leader claimed that the US decision to move its embassy in Israel to the Jewish state’s capital, Jerusalem, was not cause for “celebration” if it “led to people dying,” reported Haaretz.

The remark followed a 90-minute meeting between Macron and Netanyahu during which they discussed the mounting threat posed by Iran and the fate of the 2015 nuclear deal with the Islamic regime.

While Macron communicated France’s concerns about Iran, he continued to emphasise the purported validity of the Iran nuclear deal, arguing that it should be augmented with an agreement covering Tehran’s ballistic-missile development and aggression in the region.

According to Macron, the two heads of state agreed to develop joint working groups to coordinate efforts.

Netanyahu, for his part, said he did not ask Macron to withdraw from the  nuclear deal. “I didn’t ask France to withdraw from JCPOA because I think it will be dissolved by weight of economic forces,” Netanyahu said.

As he put it, “My interest is not this or that agreement but to make sure Iran does not have nuclear weapons, and the last thing anyone wants is to have this theocratic dictatorships have a nuclear arsenal.”

Netanyahu said the “most important thing is to get Iran out of Syria.”

Macron said the moving of the embassy to Jerusalem provoked violence and did not promote peace. “If this leads to people dying it’s not a celebration,” he said, adding that France sought to help find a solution to the humanitarian crisis in the Gaza Strip.

In addition to implying that moving of the US embassy to Jerusalem was to blame for violence in Gaza, Macron also told Netanyahu that France seeks a “long-term and just solution of two states with Jerusalem as a shared capital,” adding that his nation is also “commit[ed to] the security of Israel.”

Prime Minister Benjamin Netanyahu and his wife Sara, and French President Emmanuel Macron and his wife Brigitte attended a gala event in honor of 70 years of the State of Israel and the opening of the Israel-France Cross-Cultural Season. 🇮🇱🇫🇷https://t.co/Pjt5J4a2lP pic.twitter.com/2igdnnWK6b

Ahead of his meeting with Macron, Netanyahu and his wife Sara met with leaders of the Jewish community in Paris. The prime minister spoke about Israel-France relations, recent waves of anti-Semitic attacks and the threat of radical Islam.

“We are preventing terrible attacks, including here, in France. Israel has stopped a great deal of attacks in Europe and will continue to do so,” Netanyahu said.

France honours 70 years of the State of Israel

Prime Minister Benjamin Netanyahu and his wife Sara, and French President Emmanuel Macron and his wife Brigitte attended a gala event on Tuesday  in honour of 70 years of the State of Israel and the opening of the Israel-France Cross-Cultural Season.
Prime Minister Netanyahu and French President Macron dedicated the opening of the event which depicts 70 years of Israeli innovation, at the Grand Palais in Paris. The exhibit features developments and technologies in medicine, security and cyber, and space research, among other fields.
Netanyahu said, “So we celebrate today 70 years of Israel’s founding, of Israel’s ingenuity and 70 years of this profound relationship between our two nation.”

On Monday, Netanyahu met with German Chancellor Angela Merkel. On Wednesday, he is slated to meet with Prime Minister Theresa May and Foreign Minister Boris Johnson.

While European signatories to the 2015 Iran nuclear deal have signalled their desire to prop up the rapidly collapsing agreement, Netanyahu declared in France, “I think it will be dissolved by weight of economic forces.”