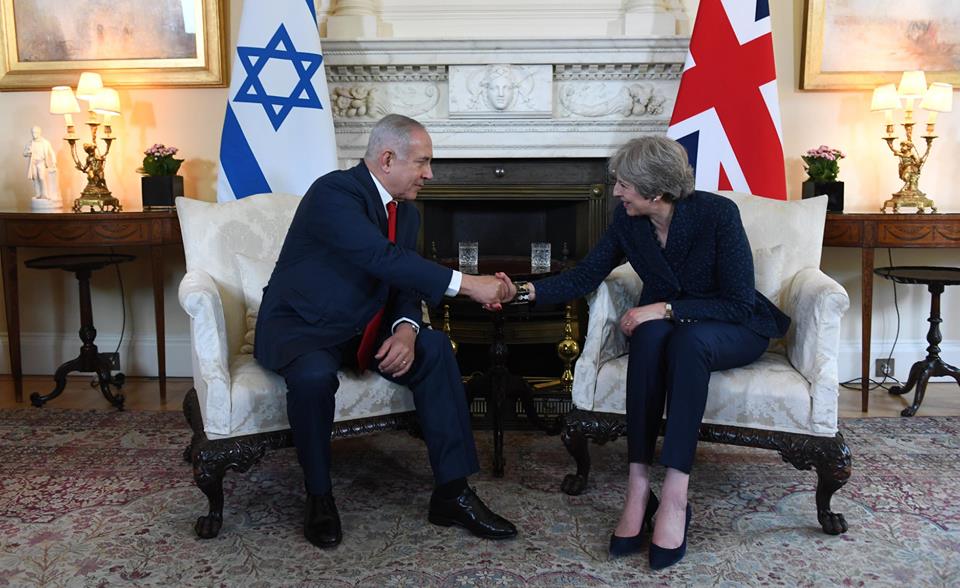 Here’s what they said.

Mrs May said: ‘Along with France and Germany the UK continues to believe that is the best route to preventing Iran from getting a nuclear weapon.

‘We will remain committed to it as long as Iran meets its obligations.”

Mr Netanyahu replied that he was focused on making sure Iran did not get a nuclear weapon and ‘how to roll back Iran’s aggression in the region’.

‘I think we can find ways to work together to achieve both goals,’ he said.

Mrs May said the UK ‘absolutely recognises’ Israel’s right to defend itself against ‘extremists and terrorists’ but was ‘concerned’ that more than 100 people had been killed.

Mr Netanyahu insisted Gaza protesters were being ‘paid for and pushed by Hamas’ to try to break through the border and kill Israelis.

‘This is not a non-violent protest, quite the contrary,’ he said. ‘We are doing everything we can to both minimise casualties and at the same time protect Israeli lives.’

Netanyahu highlights the dozens of Israelis fields along the Israeli border that have been torched by “burning kites” sent by Palestinians and explained how Hamas was diverting humanitarian aid for needy Gazans and using it for construction of terror tunnels into Israel.

Outside Downing Street protesters gathered both in support of Israel and the Palestinians. Both sets of protesters were allocated specific areas to protest in and the protesters on both sides chanted for their various causes.

Shamefully, the pro-Palestinian protesters broke through the cordoned off area, crossed the road and positioned themselves right next to the gates of Downing Street. Police, either unwilling or unable to control the crowd, allowed these protesters to then stay in that area, possibly causing a serious security concern as Prime Minister Netanyahu entered the complex having to drive right past these demonstrations rather than them being a safe distance from the gates.

Unfortunately, this is not the first time that anti-Israel/pro-Palestinian demonstrators have broken these rules, especially when Netanyahu is coming to London. The fact this has happened again shows how they are both willing to break the rules set out by police and they are allowed, time and time again, to get away with without punishment.

You can hear the anti-Israel protesters in the video below.