London: Protesters chant threats of death to Jews during protest outside US Embassy 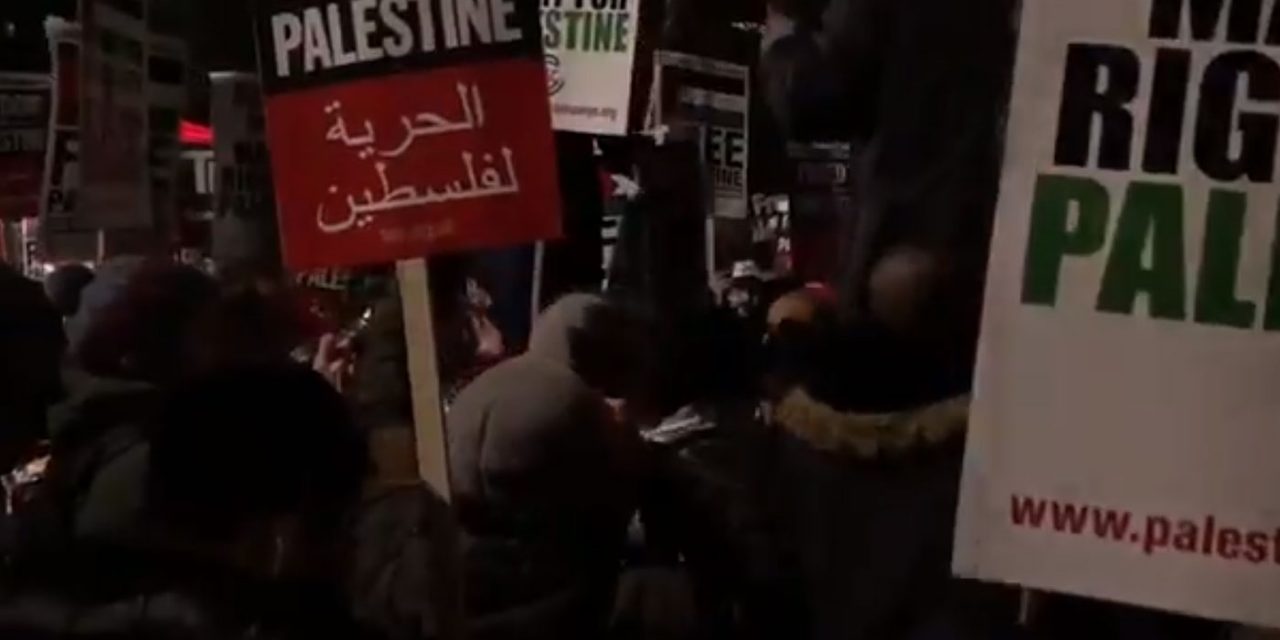 Demonstrators have chanted antisemitic slogans during a protest outside the American embassy in London.

Thousands of activists gathered at the embassy amid cries of “death to Israel, death to America” following the announcement that the United States would recognise Jerusalem as the capital of Israel.

However, to dispel any notion that they were protesting opposing “Israel” or “Zionists”, they also aimed their threats towards Jews.

The protesters chanted “Khaybar Khaybar, ya yahud, Jaish Muhammad, sa yahud” – which translates as “Jews, remember Khaybar the army of Muhammad is returning”.

This is popular Arabic battle cry and refers to a Jewish massacre in 628 AD, where Muhammad’s forces slaughtered the Jewish inhabitants of Khaybar, taking their lands and possessions.

Tonight outside the US embassy in London; "Khaybar Khaybar, ya yahud, Jaish Muhammad, sa yahud" or "Jews, remember Khaybar the army of Muhammad is returning". They mean Zionists tho…@PSCupdates are they your banners they're holding? @mishtal pic.twitter.com/PuMaZEomEk

The fact they are telling Jews to remember this massacre and then saying that the “army of Muhammad is returning” clearly shows that they would like a repeat of history. And interestingly, this story refers to Muslims taking Jewish land and possessions and keeping them for themselves.

The protesters chanted other anti-Israel and anti-Semitic slogans also, such as “From the river to the sea, Palestine will be free”, which is a call to wipe Israel off the map (the river is the Jordan and the sea is the Mediterranean).

They also chanted “victory to the intifada”, which again is a calling for “armed struggle”, or terrorism against Israel and Jews.

The protesters were holding banners for the Palestine Solidarity Campaign and other anti-Israel organisations.

The Jewish Chronicle reports that Jewish human rights groups appealed to the Metropolitan Police to take action following the anti-Semitic chanting, but it is not believed any investigation has yet been opened.

In a joint statement, the Jewish Leadership Council, Board of Deputies and Community Security Trust said the “Khaybar, Khaybar”  chant could only be interpreted as “a call to incite violence against Jewish people”.

The organisations said: “It is outrageous that these protesters thought that such a chant would be acceptable on the streets of London in 2017. That this comes in the context of a firebombing of a synagogue in Sweden and an attack on a kosher restaurant in Amsterdam only increases our concern. These acts are not criticisms of a decision by the US government but demonstrations of antisemitism.

“We welcome the condemnation by the protest organisers of this notorious Jihadi chant – which was clearly audible at the height of the demonstration –  but urge them to take action to ensure that such acts do not go unchallenged at their events in the future. We further call on all of those who addressed the rally to unequivocally condemn the chants and undertake not to support or organise any event at which such activity is tolerated in the future.”

Chanted outside the US embassy this evening "From the river to the sea Palestine will be free" Presumably they mean they are upset about US recognition of Jerusalem as Israel's capitol.

Also another chant at the end does anyone know what it is? pic.twitter.com/uhgtIGnevF

The anti-Semitic chanting was condemned in a joint statement issued by organisers the Palestine Solidarity Campaign, Friends Of Al Aqsa, Muslim Association of Britain, Stop the War Coalition and Palestinian Forum in Britain.

They claim that “after the main demonstration had disbanded some of those who had been present remained and chanted slogans which demonstrated hatred and advocated violence.”

Therganisers say they “deplore such behaviours, which are not, shared or endorsed by our organisations or by the vast majority of those who attended the demonstration”, adding that they “stand against racism and discrimination of all forms including antisemitism.”