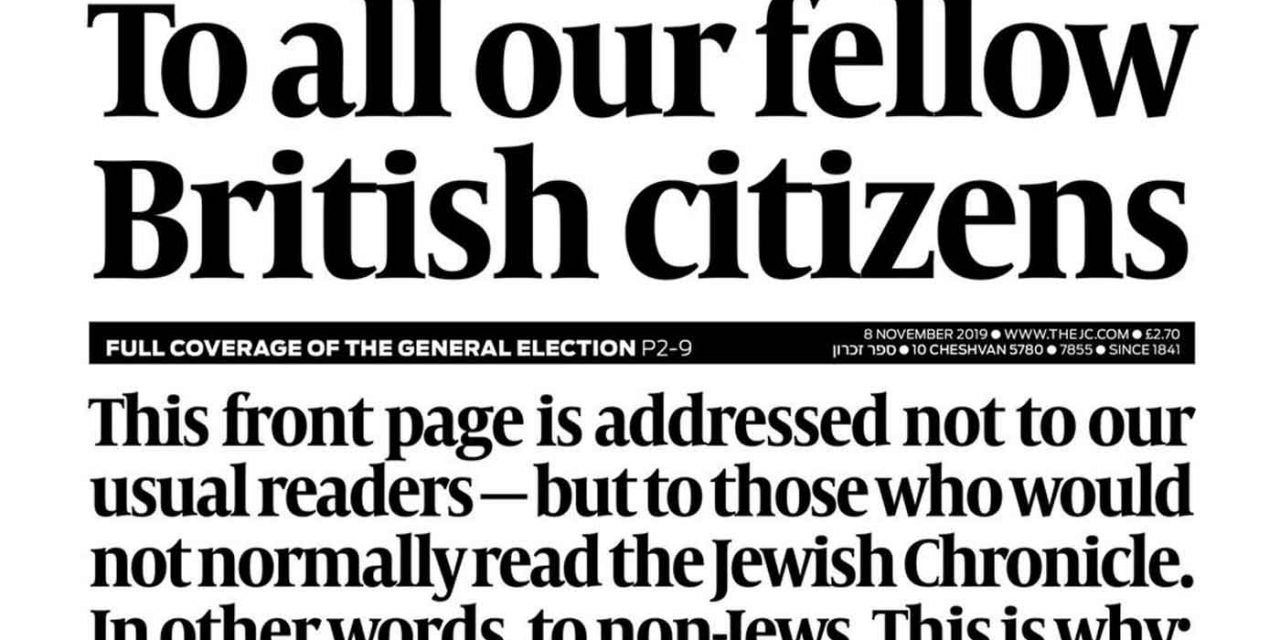 The Jewish Chronicle, one of the UK’s leading Jewish newspapers used the front page of its newspaper to urge non-Jews to oppose Jeremy Corbyn’s Labour party which it sees is a massive threat to the Jewish community in Britain.

Here's our front page this week – addressed not to our usual readers but to our fellow British citizens pic.twitter.com/7K5qi8GhBJ

The vast majority of British Jews consider Jeremy Corbyn to be an antisemite. In the most recent poll, last month, the figure was 87 per cent.

Putting oneself in the shoes of another person, or another group, can be difficult. But we believe it is important — and urgent — that you do that. Perhaps the fact that nearly half (47 per cent) of the Jewish community said in that same poll that they would “seriously consider” emigrating if Mr Corbyn wins on December 12 will give you an indication of what it feels like to be a British Jew at a time when the official opposition is led by a man widely held to be an antisemite.

There is racism on all sides of politics and it must be called out wherever it is found. History has forced our community to be able to spot extremism as it emerges — and Jeremy Corbyn’s election as Labour leader in 2015 is one such example.

Throughout his career, he has allied with and supported antisemites such as Paul Eisen, Stephen Sizer and Raed Salah. He has described organisations like Hamas, whose founding charter commits it to the extermination of every Jew on the planet, as his “friends”. He has laid a wreath to honour terrorists who have murdered Jews. He has insulted “Zionists” — the word used by antisemites when they mean “Jew” because they think it allows them to get away with it — as lacking understanding of “English irony”.

There were some who hoped that he might change as leader. The opposite has happened. The near total inaction of Mr Corbyn and the rest of the Labour leadership in dealing with antisemites in the party has both emboldened them and encouraged others.

Indeed, Mr Corbyn and his allies have actively impeded action against the racists.

Instead of listening to and learning from mainstream Jewish bodies such as the Board of Deputies and Jewish Leadership Council, Mr Corbyn has treated them and their recommendations with contempt — and given support to fringe organisations set up solely to deny the existence of Labour antisemitism.

Is it any wonder Jews worry about the prospect of Mr Corbyn as prime minister?

Yet, while we see all this, we also see an election being fought in which antisemitism in the Labour Party, inspired by its leader, is mentioned only occasionally as an afterthought. Brexit, austerity, the NHS, education and myriad other issues are, of course, vital. But how can the racist views of a party leader — and the deep fear he inspires among an ethnic minority — not be among the most fundamental of issues?

That is why we are seeking your attention. If this man is chosen as our next prime minister, the message will be stark: that our dismay that he could ever be elevated to a prominent role in British politics, and our fears of where that will lead, are irrelevant.

We will have to conclude that those fears and dismay count for nothing.

But we think you do care.

We believe that the overwhelming majority of British people abhor racism.We ask only that, when you cast your vote,you act on that.