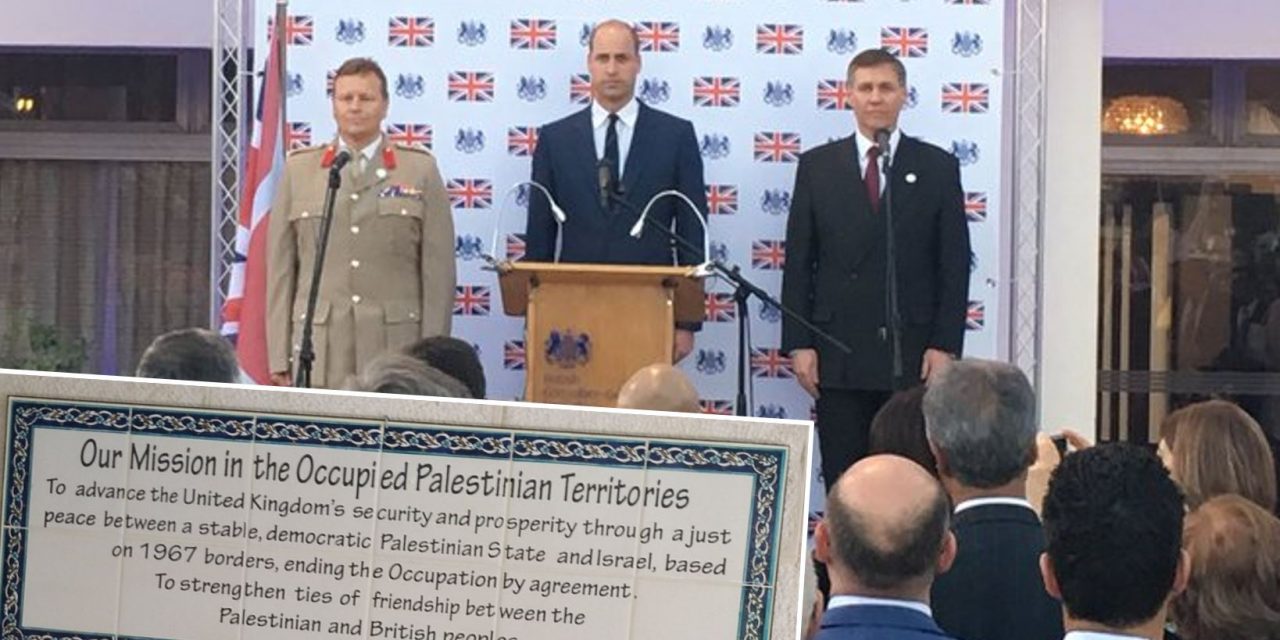 The Prince succeeded in rising above the biased and outdated diplomacy of the British Foreign Office that almost overshadowed the trip before it began. Whilst not contradicting existing British policy, William demonstrated that he could reach out to both Israelis and Palestinians without giving in to politically-correct, Palestinian-led demands.

After 70 years of the Foreign Office blocking Royal Family visits to Israel, Prince William has ushered in a new era in Britain’s relationship with Israel. It is time for the British Foreign Office to end its diplomatic fallacy.

The Duke of Cambridge has completed a historic tour of Israel. For the first time, in an official capacity, a British Royal has walked the ancient paths of the Jewish homeland, been immersed in its history, experienced its vibrancy, met the wonderful Israeli people, tasted its food and, we trust, returned home with a love and appreciation for the State of Israel.

Leading up to the visit, some said it was impossible for this “apolitical” trip not to become politicised. Certainly, the Palestinian leadership and the British media took every opportunity to paint Israel in a negative light. But throughout his visit, the Duke carried his duties with sensitivity to the wider political landscape, yet with a genuine interest in the places and people whom he met. He was also a true ambassador for Britain – strengthening the relationship with our closest ally in the Middle East.

The Prince succeeded in rising above the biased and outdated diplomacy of the British Foreign Office that almost overshadowed the trip before it began. Whilst not contradicting existing British policy, William demonstrated that he could reach out to both Israelis and Palestinians without giving in to politically-correct, Palestinian-led demands.

After 70 years of the Foreign Office blocking Royal Family visits to Israel, Prince William has ushered in a new era in Britain’s relationship with Israel. It is time for the British Foreign Office (FCO) to end its diplomatic fallacy.

Many were shocked when the Foreign Office announced ahead of the trip that William will spend time in “the Occupied Palestinian Territories” within which he will be briefed on Jerusalem’s Old City and the Mount of Olives.

This implied that Judaism’s holy sites, the Western Wall and Temple Mount, were not in Israel, but “occupied” Palestinian Territories. But this is only a reflection of existing British policy – totally false but none the less quoted in parrot fashion by most British diplomats.

However the lands now constituting Israel, the “West Bank” and Gaza were occupied by the Ottoman Empire and then administered by Britain under the Palestine Mandate. After the 1948 war where the Arabs intention was the extermination of the new State of Israel, the area beyond the cease-fire lines, including east Jerusalem and the “West Bank”, was illegally occupied by Jordan.

Jerusalem’s Old City cannot be “Occupied Palestinian Land” because it was never part of a non-existent Palestine.

The FCO policy is nothing new. It has shaped Britain’s attitude towards Jerusalem for decades. But with the UK having ended the 70 year wait for a Royal Visit, now is an opportunity to review the terminology which is an insult to Jews – and Christians – regarding Israel’s Sovereignty over Jerusalem.

A team photo with the Duke of Cambridge after a GREAT day 1 of the visit in Ramallah. See you tomorrow on another day! Thank you to everyone who made today very successful. #AhlanPrinceWilliam pic.twitter.com/Yeh1MXNXHj

After Trump’s declaration that he recognises Jerusalem as the capital of Israel and the move of the American Embassy to Jerusalem, the Palestinians are trying to find countries that are wiling to declare that Jerusalem is the capital of Palestine. The UK must not be sucked in.

One small step before a UK embassy move to Jerusalem is even considered would be to redefine the purpose of the UK Consulate in Jerusalem. Currently it is ONLY for representation to the Palestinians, not Israelis. This is nothing short of hypocrisy, especially when you consider that the reason for not moving the embassy from Tel Aviv is apparently to avoid taking sides. If this was true, the consulate to Palestinians should be in Ramallah, but it isn’t. The hard truth is that Britain still fails to recognise the reality of Jewish sovereignty over Jerusalem.

Here is the ceramic sign photographed this week at the UK consulate in Jerusalem. Its purpose is clear.

Prince William's visit to the Old City of Jerusalem, which will likely include the Western Wall, takes place under the auspices of the UK Consulate General in Jerusalem @UKinJerusalem. Here's its mission statement: pic.twitter.com/M8AdmPAHIj

To demonstrate this bias, out of 30 tweets made by the UK consulate in Jerusalem, one was from Prince William’s time in Tel Aviv, one from Jaffa and one when the Prince landed at Ben Gurion Airport. All the remainder were either of his time in the Old City or Ramallah. None were included when William was IN Jerusalem on “Israel” business.

Further to this, there were also reports that the Foreign Office did not allow the Jerusalem mayor, Nir Barkat,  to meet with Prince William whilst he was visiting Jerusalem. It invited the mayor to the reception in Tel Aviv instead, but Barkat apparently said it should be in Jerusalem or not at all. It was not at all.

Prince William himself was brilliant. Let’s hope his open-mindedness and open heart towards both Israel and Palestinians inspires the UK Foreign Office to emulate.

"My message tonight is that you have not been forgotten. It has been a very powerful experience to meet you and other Palestinians living in the West Bank, and to hear your stories."#AhlanPrinceWilliam @KensingtonRoyal pic.twitter.com/uRe7BnXsrW