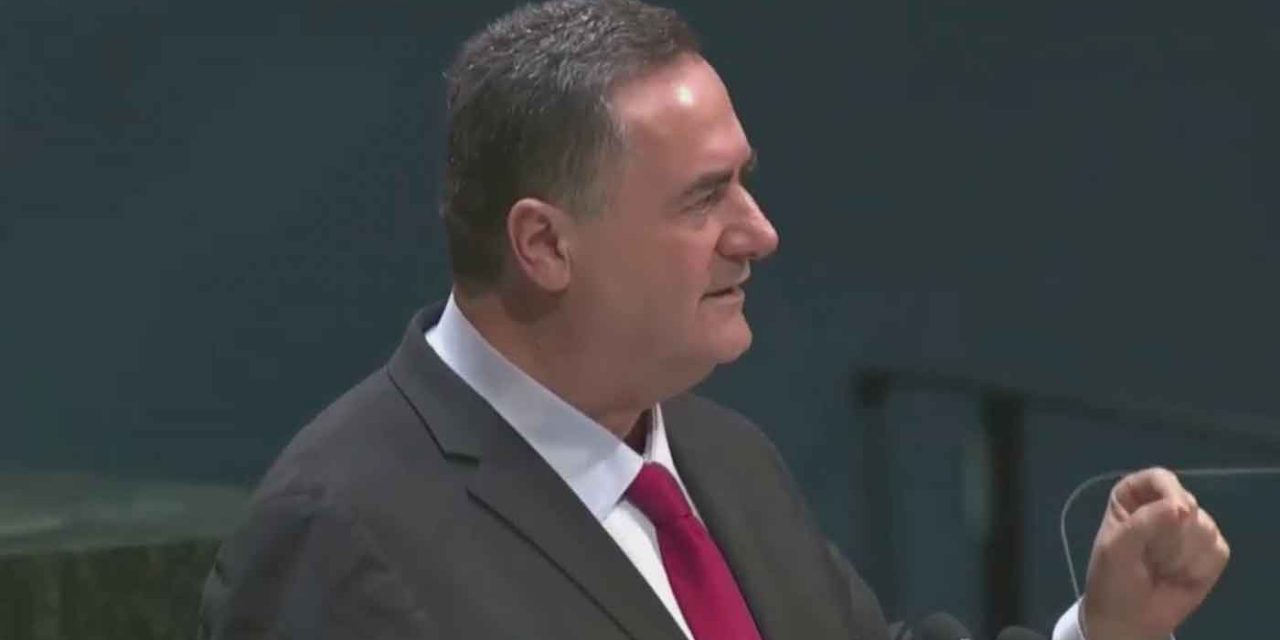 Full video of his speech:

Full transcript of his speech:

I, Israel Katz, son of Holocaust survivors Meir and Malka Katz, may they rest in peace, am proud to stand here today, at the podium of the United Nations, as the Foreign Minister of the State of Israel.

For me, this is a very moving moment.

In 1947, the U.N recognized the right of the Jewish People, to its own state in the Land of Israel,

And seventy-one years ago, we established the State of Israel.

Since then, we have defended, and developed our homeland, and today, the State of Israel is strong and advanced, “a Start-Up Nation” that leads in many fields.

Just as the U.N decided seventy-two years ago.

I want to thank the President of the United States, Donald Trump, for his historic and brave decision to recognize Jerusalem, the eternal capital of the Jewish People for three thousand years, as the capital of Israel, and to relocate the American embassy to Jerusalem.

I call on all countries to follow the United States, and to recognize Jerusalem as the capital of Israel.

Israel wants peace with all its neighbors. We signed peace agreements with Egypt and Jordan, and are working today to advance our relations with many Arab states in the region.

We call on the Palestinian Authority to stop incitement. To stop encouraging and financing terrorism. And to recognize the right of the Jewish People to its own state.

We call on the Palestinians to come back to direct negotiations without any pre-conditions.

I call on the UN to implement the decisions that you took on this issue, and not allow any country to provide aid to Gaza until Hamas returns them to their families.

The other day I heard the President of Turkey Erdogan attack Israel and I want to say to him – you that brutally oppress the Turkish people, slaughter the Kurdish minority and support the terror organization Hamas;

You are the last one that can lecture Israel. You are not the Sultan and Turkey is not the Ottoman Empire. Shame on you.

The main problem threatening stability and security in the Middle East is Iran, which threatens to destroy Israel, and works against the regimes of many countries in the region.

Iran uses its proxy terror organizations – Hezbollah in Lebanon, Hamas and Palestinian Islamic Jihad in Gaza, the Houthis in Yemen and Shi’ite militias in Syria and Iraq – against Israel, and also against other states in the Middle East.

We recently saw a serious escalation in which Iranian missiles were launched from Iran against Saudi oil facilities in order to destabilize world oil supplies.

This terror attack against Saudi Arabia was done on the direct orders of Iranian leader Ali Khamenai.

The UN must declare Hezbollah, and the Iranian Revolutionary Guards as terror organizations.

They promote terror in the Middle East, Europe, Latin America, and all over the world. And the world must stop them.

I call on the international community to support President Trump’s maximum pressure policy against Iran.

This is the way to stop them.

We must stop Iran today, in order to prevent war tomorrow.

And to the Iranian leadership I say in their own language:

You don’t count the birds till the end of the fall.

It isn’t over till it’s over.

The reality in the Middle East also presents opportunities for cooperation and advancing the economy of all countries.

In recent years, Prime Minister Netanyahu and I have developed the Tracks for Regional Peace initiative, which will connect the Arab Gulf States by rail through Jordan to the Israeli ports in Haifa.

It will provide them a faster, shorter and safer outlet to the Mediterranean.

We are also going to connect the Palestinian Authority to this project, and this will boost their economy.

I presented this initiative to the UN Secretary General when we recently met in Abu Dhabi, and invited him to take part in this important project.

Israel has a clear policy to advance ties, and normalization with the Arab Gulf States.

We have no conflict with the Gulf states, and we have common interests in the field of security against the Iranian threat as well as in developing many joint civilian initiatives.

I hope that this cooperation will lead to the signing of peace agreements between our countries, as we did with Egypt and Jordan.

Allow me to conclude with the words of the prophet Isaiah who thousands of years ago invited all the nations of the world to come to pray in Jerusalem.

“I will bring them to my holy mountain, and make them joyful in my house of prayer: their offerings and their sacrifices shall be accepted upon my altar; for my house shall be called, a house of prayer for all people”

As we are about to celebrate the Jewish New Year, I would like to close with the traditional Jewish blessing- for all of you, for the people of Israel, and the Jewish communities around the world:

A happy and sweet New Year.”