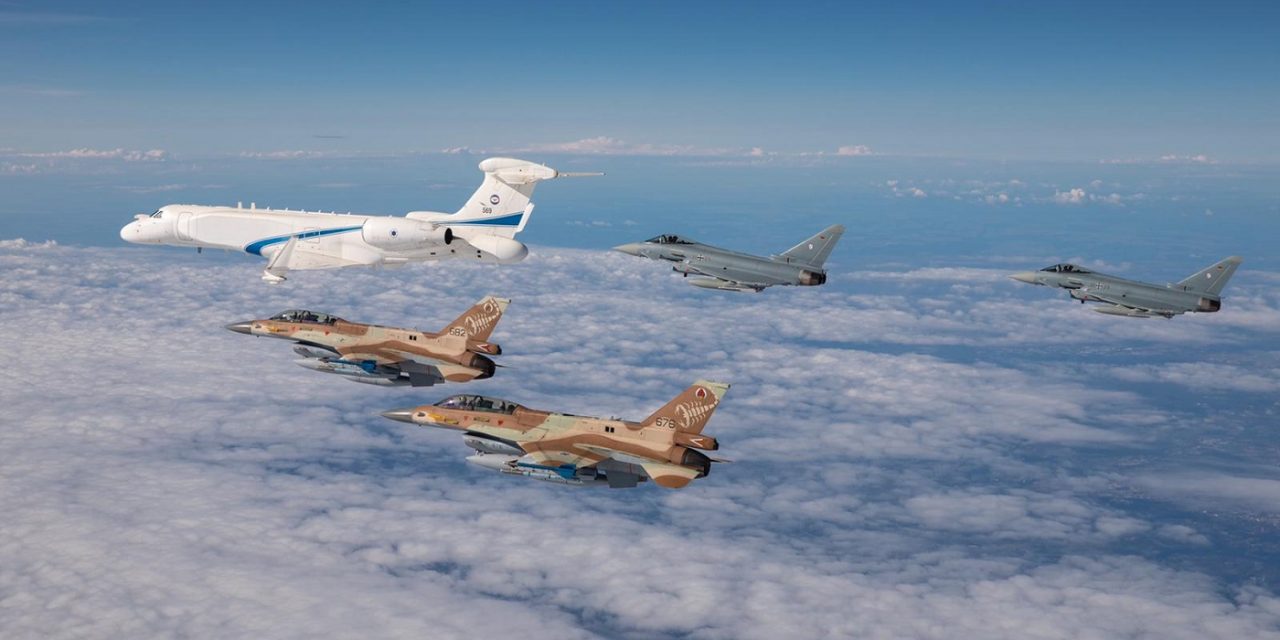 Israeli fighter jets entered German airspace for the first time in history and flew side-by-side over the former Dachau concentration camp on Tuesday as a tribute to victims of the Holocaust.

The moving flyover was one of several exercises which also included flying above the Fuerstenfeldbruck airport to honour Israeli athletes murdered in the Munich massacre.

“On behalf of the German Air Force, it is an honor for me to welcome the Israeli Air Force entering German airspace for the first time in history,” Luftwaffe Commander, Lt. Gen. Ingo Gerhatz said.

The moment the Israeli Air Force, led by Maj. Gen. Amikam Norkin, entered into German airspace for the first time ever & was welcomed by the Luftwaffe Commander, Lt. Gen. Ingo Gerhatz: pic.twitter.com/CSkFBXnkzE

The Commander of the Israeli Air Force, Maj. Gen. Amikam Norkin, said the flyby over Dachau symbolized the promise for a future.

“While remembering the darkness of the past, we carry on our wings a shared commitment to the future forever and ever. Flying together above the valley of darkness, making room for only light ahead as we vow: never again,” he said.

This is the historic moment the Israeli Air Force and @Team_Luftwaffe flew by the Dachau Concentration Camp together: pic.twitter.com/3W7MKzUEvJ

A German-Israeli delegation visited the concentration camp and laid wreaths at the memorial site.

“It is by the grace of history that today we can enjoy such close cooperation in a spirit of trust between the Israeli and German armed forces. From this, let us draw the strength to continue our commitment to the security of both our nations and to defending the universal values of freedom and human dignity that were betrayed so cruelly and terribly in this place,” said German Federal Defense Minister Annegret Kramp-Karrenbauer.

The jets also flew over the Fuerstenfeldbruck airport in honor of the 11 Israeli athletes who were murdered in the Munich massacre attack during the 1972 summer Olympics.

Today, 75 years after the Holocaust, IAF and @Team_Luftwaffe aircraft performed a historic flyby at the "Dachau" concentration camp and above the "Fürstenfeldbruck" airport, in memory of those murdered in the holocaust and the 11 victims of the 1972 Munich Massacre. pic.twitter.com/BVKQttZzjw

Because of the coronavirus pandemic, it is the only training mission the Israeli Air Force (IAF) is conducting abroad this year.

Luftwaffe chief Ingo Gerhartz in a statement called the joint exercise ‘a sign of our friendship today’.

He said it was also a reminder that Germany has an enduring responsibility ‘to fight anti-Semitism with the utmost consistency’ because of its Nazi past.

The IAF said the mission, which runs until August 28, will give its pilots a chance to practise in unfamiliar surroundings and will include simulated dogfights, air-to-ground battles and missile threats.

Israeli pilots will also take part in aerial manoeuvres with Germany and other NATO members during the deployment.

Germany and Israel have stepped up their military cooperation in recent years, with the Luftwaffe taking part in joint exercises in the Israeli Negev desert in 2019.