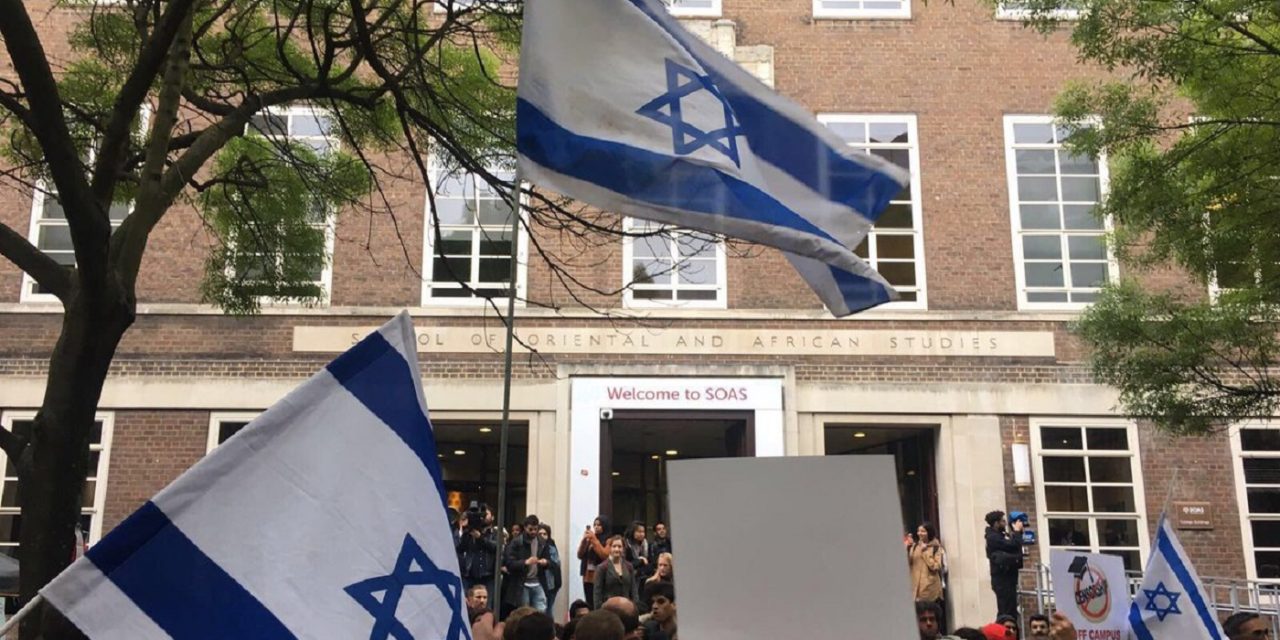 Israeli ambassador Mark Regev has defied protests to become the first diplomat from the country to speak at School of Oriental and African Studies (SOAS) in 12 years, telling demonstrators “Israel is not going anywhere”.

Outside the event, organised by SOAS Jewish Society and Model UN Society, some 200 protesters gathered, including many who claimed that Regev’s presence on campus was an affront to SOAS Student Union’s BDS policy.

Footage of anti-Semitic hate speech has emerged from the protests, including a man claiming that victims of the Holocaust were “cowards”, “bloodied” Israeli flags, blaring music and chanting the popular call for the destruction of the Jewish state, “From the River to the Sea, Palestine Will Be Free.”

However pro-Israel groups were present for counter-demonstrations. One observer noted nearly as many Israeli flags as Palestinian in the crowd. Despite a tense atmosphere, the protest did not become and police did not separate the two groups.

In the run-up to the event a letter signed by more than 100 SOAS staff called on SOAS to cancel the event, saying: “We fear that if this provocative event proceeds as planned, it will cause substantial distress and harm to many of our students and staff who are, have been or will be affected by the actions of what a recent UN report refers to as the Israeli ‘apartheid regime’.”

A statement from SOAS Jewish Society said: “Our society has been at the forefront of bringing another dimension to the debate often intimidated off university campuses.

Great night at @soas. Many, many supporters of free speech and Israel turned the Quad 'blue and white' Thanks to @ZionistFed & all involved pic.twitter.com/k79M8pCvXN

“Hosting the Ambassador fits within our guidelines of providing an additional viewpoint that we will be able to challenge throughout the course of the evening, this will be an evening of discussion, not an unchallenged lecture.”

Despite the protests outside, the event itself took place with little interruption. Approximately 60 people attended the talk, chaired by Professor Eric Heinze of Queen Mary University London.

Wrapping up @AmbMarkRegev talk at @SOAS; challenging Q&A from @Eric_Heinze_ & students, vibrant discussion: a win for dialogue over hatred pic.twitter.com/wBmNrydpYX

Inside, he spoke about his political experience then answered questions from the crowd, which varied from dealing with anti-Semitism to questions of border walls and settlements.

He said: “”If I’m a provocation, then I apologise. But I think there is a problem that people view Israel through a colonial prism.” Revev added, that “We have made mistakes… The question is can we learn from them. If you look at public debate, Israel is a very self-critical society”

On Israel’s global relations, he said the Jewish state wants “to try a regional approach, bring in the Arab states into the peace process”, and added that President Donald Trump was ‘good news’.

Flyers given out at @SOAS tonight…
Freedom of speech (just don't talk to the cops, press, Zionists and make sure your face is covered!) pic.twitter.com/x7MW2juutm