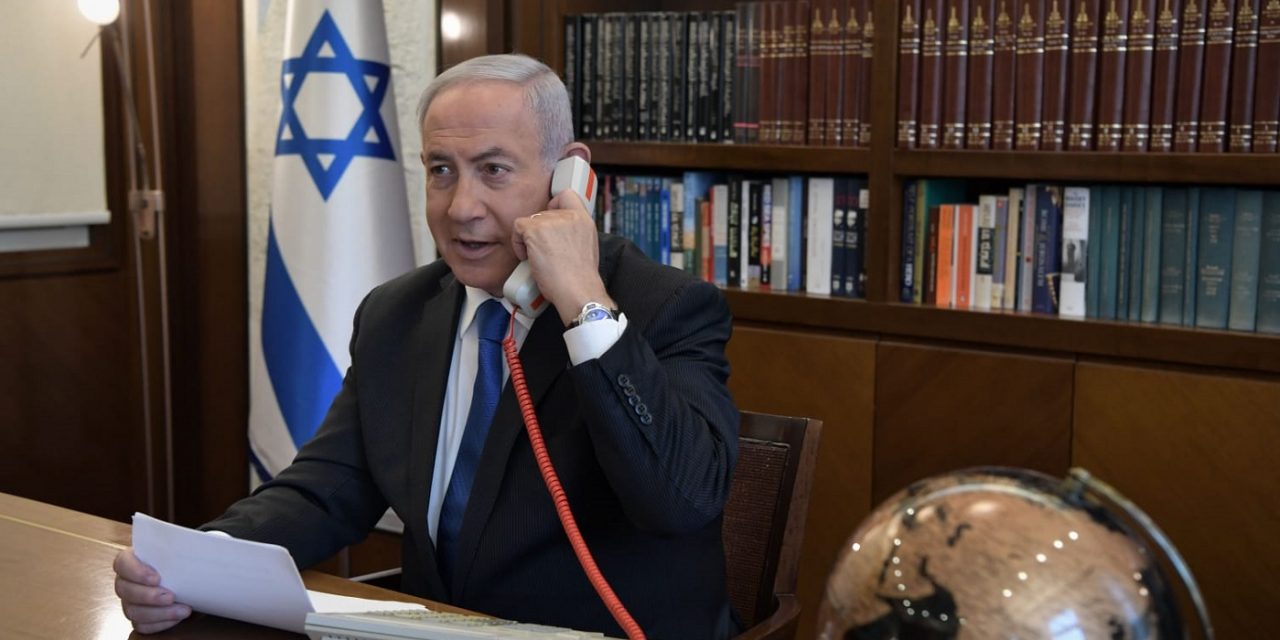 The announcement makes the UAE the first Gulf Arab state to do so and only the third Arab nation to have active diplomatic ties to Israel.

Trump tweeted a statement from the countries, acknowledging the deal. He then told reporters in the Oval Office that it was “a truly historic moment.”

“Now that the ice has been broken I expect more Arab and Muslim countries will follow the United Arab Emirates,” he said.

After a call with President Donald Trump congratulating him on the historic achievement, Prime Minister Benjamin Netanyahu made a televised statement to Israel announcing the agreement.

“Today we usher in a new era of peace between Israel and the Arab world,” Netanyahu said. “There is a good chance we will soon see more Arab countries joining this expanding circle of peace.”

The prime minister also said that in exchange for the agreement, he had agreed to put his plan to apply sovereignty in parts of Judea and Samaria and the Jordan Valley on ice in order to move the agreement on ties with the UAE forward.

However, he also said there was “no change” to his goal of extending sovereignty over the areas in question and the delay only amounted to a “temporary hold.”

This is what peace looks like. The Tel Aviv city hall in #Israel is lit up tonight in the flag of the United Arab…

“Today we usher in a new era of peace between Israel and the Arab world.

I just came from an historic virtual conference between myself, President Donald Trump and Crown Prince Mohammed bin Zayed of the United Arab Emirates. We announced the establishment of a full and formal peace between Israel and the UAE. It includes the mutual opening of embassies, direct flights and many, many other bilateral agreements.

In 1979, Prime Minister Menachem Begin made peace with Egypt. In 1994, Prime Minister Yitzhak Rabin signed a peace treaty with Jordan. And today, I am honored to announce a formal peace agreement with the United Arab Emirates. I believe that there is a good chance that we will soon see more Arab countries join this expanding circle of peace.

I want to thank President Trump for his critical help in brokering this historic accord. And I want to thank him for his revolutionary Vision for Peace, which is the most realistic and important formula for peace in the region. President Trump’s Middle East plan served as a basis for today’s historic
peace announcement.

Israel and the UAE are two of the most advanced countries in the world.

Together, we will transform the region and forge an even better future for our people. This is a future of peace, a future of security and a future of prosperity.

I’ve always believed that we could establish peace with the Arab world and I have been working towards that lofty goal for decades. You may not know it, but I’ve been doing it all the time in meetings that are publicized and in many that are not. In Washington, in the Middle East, in daylight and in nighttime.

In recent years, Israel under my leadership has made advancements in ties with such countries as Sudan, Oman, Bahrain and other nations in the Gulf. I have reason to be very optimistic that today’s announcement with the UAE will be followed by more Arab nations joining our region’s circle of peace.

And to the people of Abu Dhabi, and its leader Crown Prince Mohammed bin Zayed, I say Salaam alaikum. Shalom Aleichem. Peace unto thee. Peace unto all of us.״