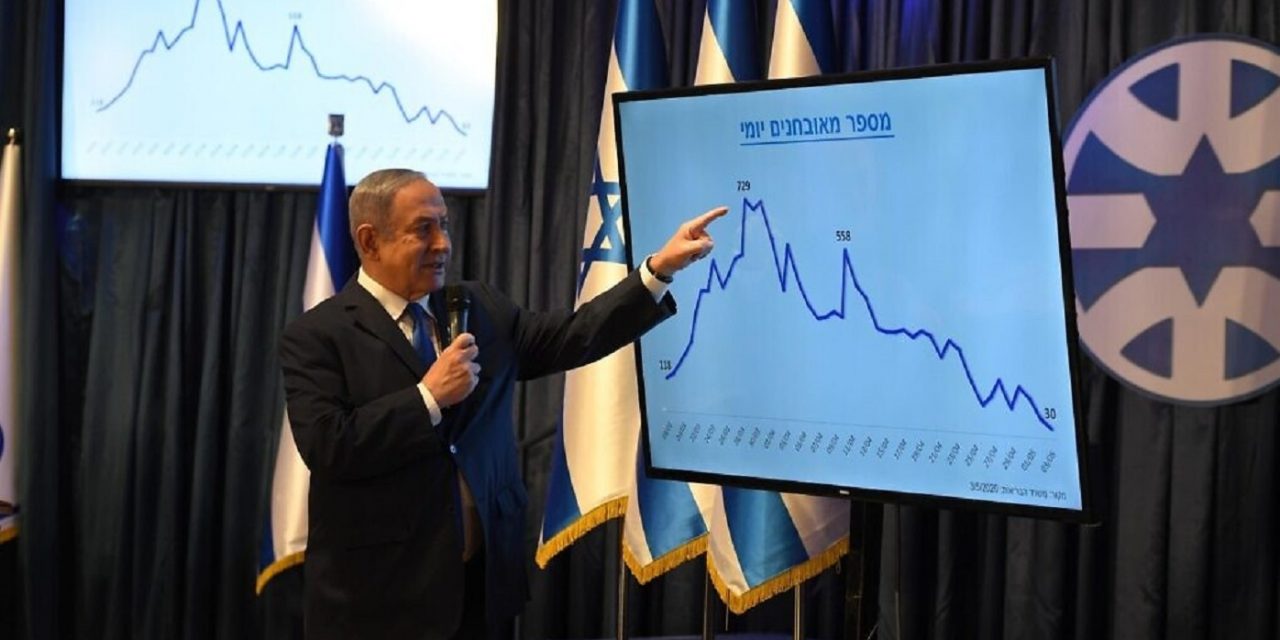 Prime Minister Netanyahu announced on Monday night that Israel has brought the virus under control with its death toll at 235.

Israel’s cabinet ministers on Monday approved a series of measures to ease Coronavirus restrictions, among them lifting the 100-metre limit on travel from home for nonessential activities, but cautioned that should infection rates exceed certain caps, the lockdown measures could snap back.

“We achieved major success” in containing the virus, Netanyahu said during a press conference at his office in Jerusalem, citing the declining rate of new infections and the fast-growing number of people to recover from COVID-19, while noting that “every death is a great loss… it’s heartrending.”

Netanyahu was able to showcase stats that emphatically endorsed his claim that a combination of three factors — the early preventative steps he introduced (closing the borders, ordering folks to say home, and instituting digital tracking of carriers), the performance of the healthcare system, and Israelis’ general compliance with the restrictions — had placed Israel near the top of the developed world in facing COVID-19.

Israel is down to a few dozen new cases of infection per day from a high of over 700, he noted; it has fewer than 100 serious cases; there are far more recoveries than new cases daily.

Netanyahu offered an interesting insight into why he reacted so speedily to the advent of the pandemic and advised other world leaders — notably Austria’s Sebastian Kurz — to treat it with the utmost seriousness. When he was a student at the Massachusetts Institute of Technology in the 1970s, he recalled, the first lesson in a statistics course he took focused on the exponential spread of viruses. That class “is etched in my memory,” he said. When he first heard about COVID-19, “I remembered the course” — a course, he said, that had now saved a great many lives.

But he also stressed that much about the virus was still unknown; that it might yet come back, stronger and deadlier; and that Israel would have to batten down again if infection rates start to soar, or if the number of serious cases rises above 250. “Nobody knows what will happen next,” he said — not his fellow world leaders, and not the world experts with whom he also consults. As with a pilot checking the vital gauges, he said, “if a red light comes on, we’ll have to change the policy.”

A number of changes to the emergency ordinances were effective immediately, such as the reopening of some businesses, while others will not come into force until later in the week. The government also signed off on directives that certain businesses must adhere to in order to operate.

Among the restrictions that Netanyahu said would be lifted was the 100-meter limit on travel from home for activities deemed non-essential.

“I know you’ve been waiting for this for a while,” he said.

Visits to immediate family members would again be permitted, including with grandparents, for the first time in six weeks. But social distancing should be maintained on visits to elderly relatives, with no hugs or kisses, he said.

*Always check with official sources for the latest advice.