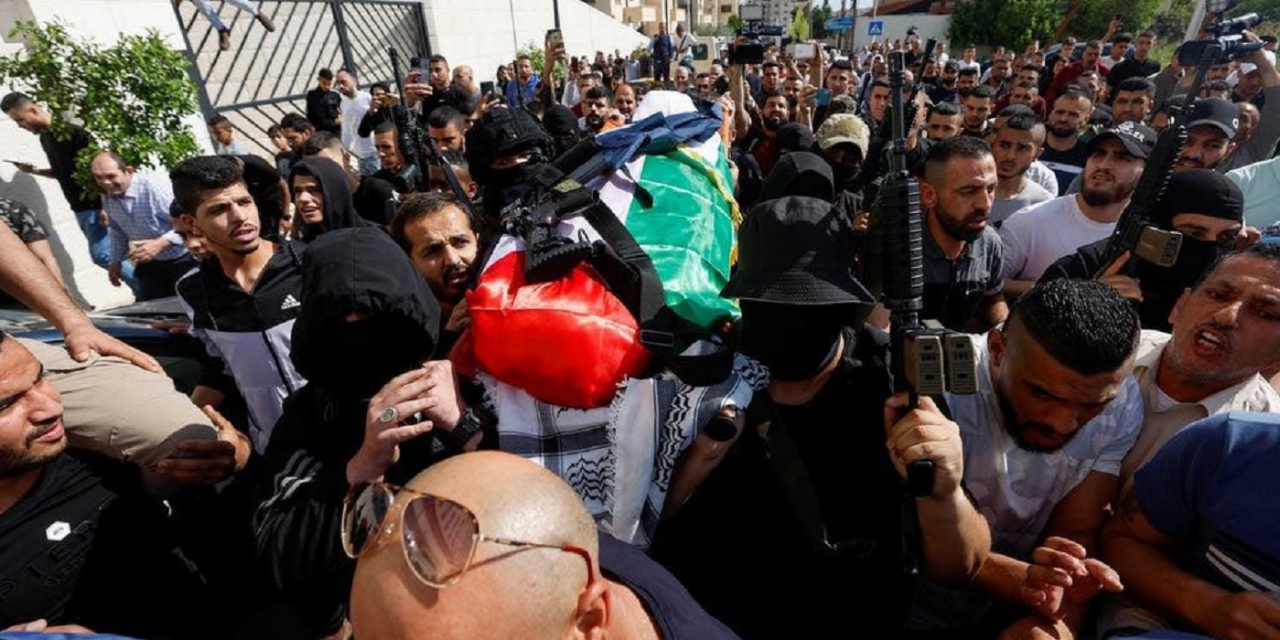 Sections of the UK media have been quick to blame Israel for the death of an Al Jazeera journalist, shot during an Israeli raid in Jenin, despite footage that suggests she could have been shot by Palestinian terrorists.

Israel has called for a joint and transparent investigation into the killing of Shireen Abu Aqla, but the Palestinian Authority has refused. Meanwhile, footage circulating on social media shows the body of Shireen Abu Aqla being carried through the streets within an hour of her death, meaning it will be difficult to know the full facts behind the tragic death.

The shooting took place during a raid by Israeli forces, as part of a wider IDF counterterrorism operation following a series of terror attacks in Israel. Several of those perpetrators were from the Jenin locality and Israel has made a string of arrests over recent weeks. During the operation on Wednesday, IDF forces were subject to substantial gunfire and explosives were also thrown at them.

Well, that didn’t take long. Al Jazeera journalist Shireen Abu Akleh was killed barely an hour ago, and her funeral is already taking place place. No doubt the Palestinians seeking to erase any evidence! Note also press walking side by side with gun-wielding terrorists. pic.twitter.com/G2ZfBZLWVY

This is the moment a Palestinian gunman—one of dozens—recklessly opened fire during IDF counterterrorism activity in the Jenin Refugee Camp this morning. They falsely claimed to have hit an IDF soldier. pic.twitter.com/rMZs896hdc

On Thursday, the Palestinian Authority has confirmed earlier reports that it has refused a joint investigation into the Al Jazeera journalist’s death.

“Israel requested a joint investigation and the handing over of the bullet that assassinated the journalist Shireen, and we refused that, and we affirmed that our investigation would be completed independently, and we will inform her family, America, Qatar and all official authorities of the results of the investigation,” Palestinian Authority Civil Affairs head Hussein al-Sheikh said.

Prime Minister Naftali Bennett tweeted, “According to the information we have gathered, it appears likely that armed Palestinians — who were firing indiscriminately at the time — were responsible for the unfortunate death of the journalist

“Palestinians in Jenin were even filmed boasting “We hit a soldier; he’s lying on the ground”. However, no IDF soldier was injured, which increases the possibility that Palestinian terrorists were the ones who shot the journalist,” the statement read.

“Israel has called on the Palestinians to conduct a joint pathological analysis and investigation, which would be based on all of the existing documentation and findings, in order to get to the truth. So far, the Palestinians have refused this offer.

Bennett continued, “PM Bennett: “IDF forces will continue their counterterrorism operations, in order to end the deadly wave of terror and restore security to the citizens of Israel.”

Prime Minister Bennett on the sad death of veteran journalist Shireen Abu Akleh:
"According to the information we have gathered, it appears likely that armed Palestinians — who were firing indiscriminately at the time — were responsible for the unfortunate death of the journalist

Despite it being unclear who shot the journalist, news platforms worldwide were quick implicate Israel based on Al Jazeera’s own report, without proper journalistic due diligence. Whilst some, such as the BBC, were careful to state that the journalist was killed in crossfire during an Israeli raid, which is factually correct, some went further and prematurely stated that she was killed by Israel.

The Times, for example, stated: “A veteran Al Jazeera journalist was shot dead by Israeli troops while covering a raid on the Jenin refugee camp in the occupied West Bank.”

IDF Spokesperson Brig. Gen. Ran Kochav told Israel’s Army Radio that “all of the data indicate with a high degree of probability” that Abu Akleh was killed by Palestinian fire. “But I say that cautiously,” he added.

“We proposed to the Palestinians to begin a joint investigation. They took the body. They aren’t willing—they’re hiding, and they probably know why,” Kochav said.

In a message posted on Twitter, Israeli Foreign Minister Yair Lapid wrote: “We have offered the Palestinians a joint pathological investigation into the sad death of journalist Shireen Abu Akleh. Journalists must be protected in conflict zones, and we all have a responsibility to get to the truth.”

Palestinian Authority President Mahmoud Abbas said in a statement that he “condemns the crime of the execution Shireen Abu Akleh” and holds Israel “fully responsible.”

Israel’s Defense Minister Benny Gantz  gave an update during Wednesday, saying, “Preliminary findings from the investigation conducted by the IDF in the last several hours indicate that no gunfire was directed at the journalist – however the investigation is ongoing.

“On the other hand, we have seen footage of indiscriminate shooting by Palestinian terrorists, which is likely to have hit the journalist. We will communicate our findings in a clear and transparent manner to our American friends, as well as to the Palestinian Authority.”