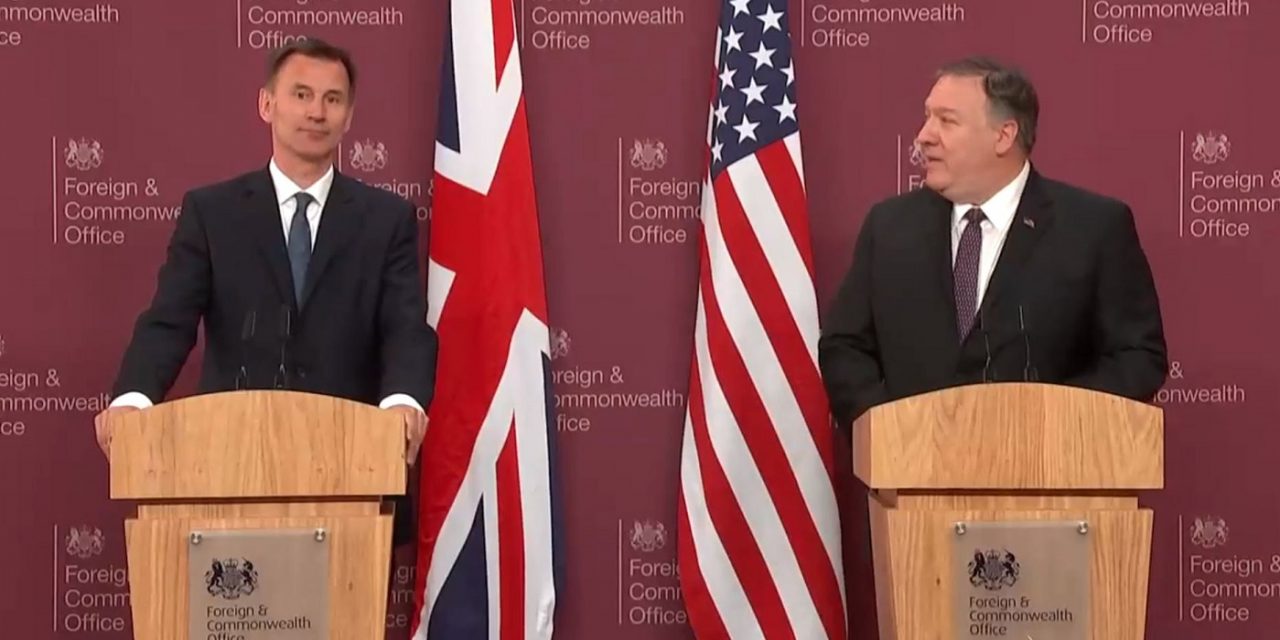 UK Foreign Secretary, Jeremy Hunt, has threatened “consequences” if Iran fails to honour commitments it made regarding its nuclear programme.

Speaking at a joint-press conference with US Secretary of State, Mike Pompeo, Hunt called Iran’s announcement earlier today an “unwelcome step” but says UK will continue to abide by JCPOA as long as Iran does. “I urge iran not to take further escalatory esteps and to stand by its commitments… as long as Iran keeps its commitments, then so too will the UK.”

Iran made the 60-day ultimatum on Wednesday saying it was relaxing curbs on its nuclear programme under the 2015 JCPOA deal, and threatened to do more — including enriching uranium to a higher level — if other countries did not shield it from U.S. sanctions.

Hunt called the nuclear deal a “very important achievement of Western diplomacy” which has stopped Iran from getting a nuclear weapon and its Arab neighbours from doing the same. “We urge the Iranians to think very long and hard before they break that deal.”

Tensions between the US and Iran have escalated in recent days. The US military said on Tuesday that B-52 bombers would be among the additional forces being sent to the Middle East to counter what President Donald Trump’s administration says are “clear indications” of threats from Iran to U.S. forces there.

There will be "consequences" if Iran ceases its commitments on the nuclear deal, UK Foreign Secretary Jeremy Hunt says, during joint news conference with US Secretary of State Mike Pompeohttps://t.co/jmQD7jMZ87 pic.twitter.com/7OYRhSWgXF

During the press conference, the two leaders indicated their differences of approach regarding Iran, but said they stood united in defending their countries against the Iranian threat.

After being asked about Mr Corbyn’s apparent backing for Mr Maduro, Mr Pompeo told reporters: “It is disgusting to see leaders, not only in the United Kingdom but in the United States as well, who continue to support the murderous dictator Maduro.

Meanwhile, Jeremy Hunt told reporters he and Pompeo had met with the Archbishop of Canterbury and other faith leaders earlier in the afternoon to discuss religious freedom, including the plight of 245 million Christians.