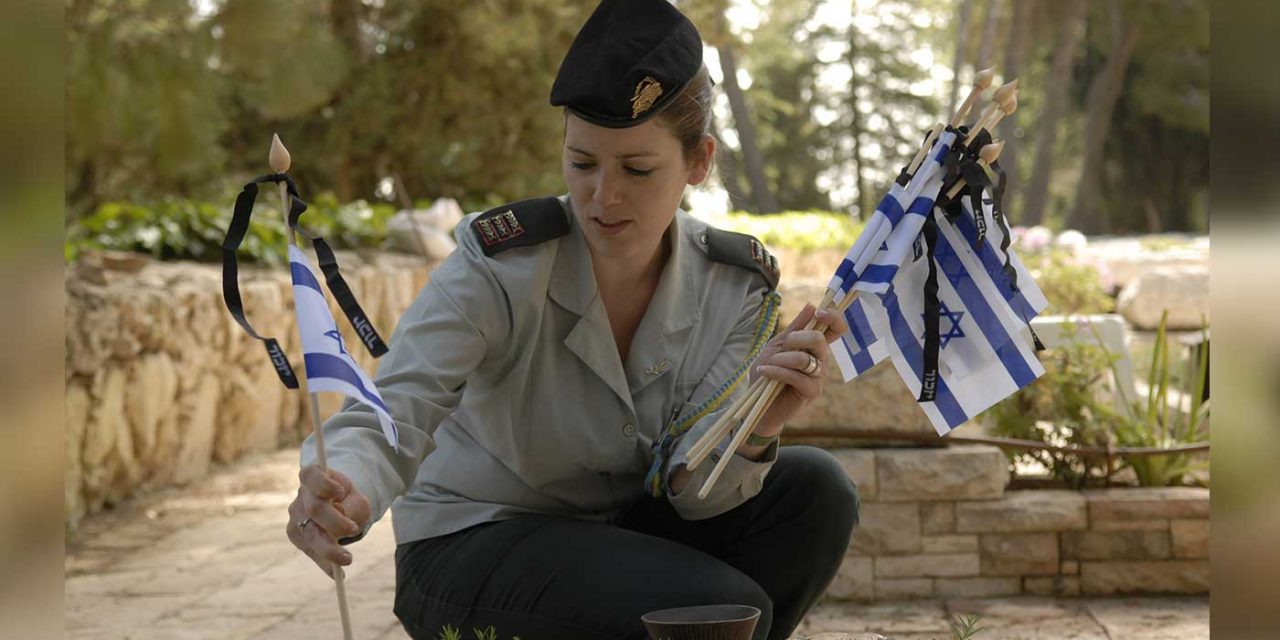 Millions of Israelis across the country stood in silence, heads bowed during the two-minute siren that sounded on Wednesday morning during Remembrance Day, in honour the fallen IDF soldiers and victims of terror in Israel.

Some 23,741 Israeli soldiers have fallen fighting for the State of Israel since 1865, while 3,150 civilians have been killed in terrorist attacks across the country.

Thousands visited military cemeteries to pay their respects to fallen soldiers and victims of terror, while several ceremonies also took place across the country. (JPost)

Our fallen IDF soldiers gave up two lives:
The lives they were living and the lives they never got the chance to live.
Let us keep their legacy alive and live in their honor. pic.twitter.com/pMOskalRH4

Prime Minister Benjamin Netanyahu gave a speech at the opening ceremony of the Memorial Day for Israel’s Fallen Soldiers at Yad Labanim saying:

“The light of the memorial candle that is being lit today across Israel also shines on the rest of the 364 days of the year. One day versus 364, but they are equally important. It is thanks to our sons and daughters, our fallen loved ones whose memories burn in our souls, that our lives are safeguarded and our country exists. Without them, where would we be? Today we bow our heads and pay our respects to Israel’s 23,741 fallen soldiers: Jews, Druze, Muslims, Christians, Bedouins and Circassians.

To this we add the thousands of victims of terrorist attacks, including the four innocent citizens who were killed earlier this week by rockets fired by terrorists in Gaza. We send our deep condolences to their families. Each person who has fallen makes a wound in our hearts. No one knows this better than you and I, my brothers and sisters. The pain and grief never cease. Often, I am told by the relatives of the fallen: “After having received the bitter news, we had to learn how to breathe again.” The lump in our throats is there all the time, day and night. There is no clear explanation of how to cope with the loss. On the one hand, we go about our daily lives, and on the other hand, not a day passes without being reminded of the faces of our loved ones, their smiles, the words they said and the things they did – as if they were here with us. But they are not here. And each time we are overcome by memories of them, we once again feel the void and the aching pain.

We cannot help but imagine what their lives could have been, what would have changed and what would have remained the same, what they would have done for the families they had or the ones they would start, for our society, for our country, and perhaps for humanity as a whole. So many questions. You know better than anyone that one does not just have to cope with the pain at that terrible moment of receiving the bitter news, a moment that cannot even be described; nor during that first year. Coping with the pain is a lifelong process. So how do we move forward?

Perhaps each and every one of you finds his or her own way to deal with the loss, but if there is one thing that unites many of us, maybe all of us, it is the understanding of the great mission that our loved ones carried out. It gives us the strength to bear the burden of grief. It is thanks to them that we live as a proud people in our homeland after many generations of weakness and humiliation. Seventy-five years ago, we were powerless. Today we are a rising world power. And since the national revival in our homeland – every generation has stood strong against our enemies. We do not want war but we know that our willingness to make sacrifices is the thing that guarantees our survival.”

The news that no mother wants to hear: pic.twitter.com/BACkQcwGfe