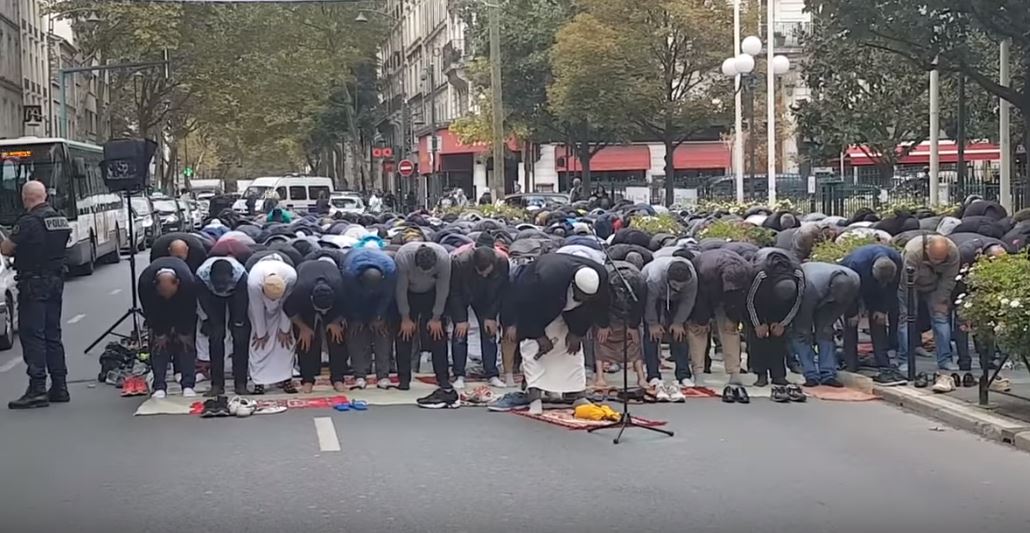 Several hundred Muslims occupied a road in Paris on 22 September for Friday prayers, with an Imam chanting words urging jihad against non-Muslims.

The prayers took place in front of a town hall at Clichy, in Paris, with the imam quoting Quran (9:36) urging jihad against non-believers, a term that earlier verses define as “Jews and Christians”:

Armed police watched on as traffic was obstructed.

Former Muslim Aldo Sterone spoke out on Twitter with disbelief that police allowed the prayer to go ahead on a public street with chanting that called for the murder of unbelievers.

"The content of this police protected street prayer in Paris stunned me. You are made complicit in your own demise."
Algerian #ExMuslim pic.twitter.com/uuziHCQpxE

It isn’t the first time this has happened. In March, Muslims in the same suburb block the same stretch of road for Friday prayers in protest of a local government decision to remove them from a building which they were occupying and had turned into a mosque.

Police removed the Muslim group known as the Union of Muslim Associations of Clichy (UAMC) who were squatting in the building after a long and heated battle between the city and the UAMC. The city wants to turn the property into a media library, and the Muslim group want it to remain a mosque.

Praying in the street seems a quite common occurrence by Muslims in Clichy. Here is more recent video from Friday 29th September of Muslims gathered in the pedestrian zone of the suburb: