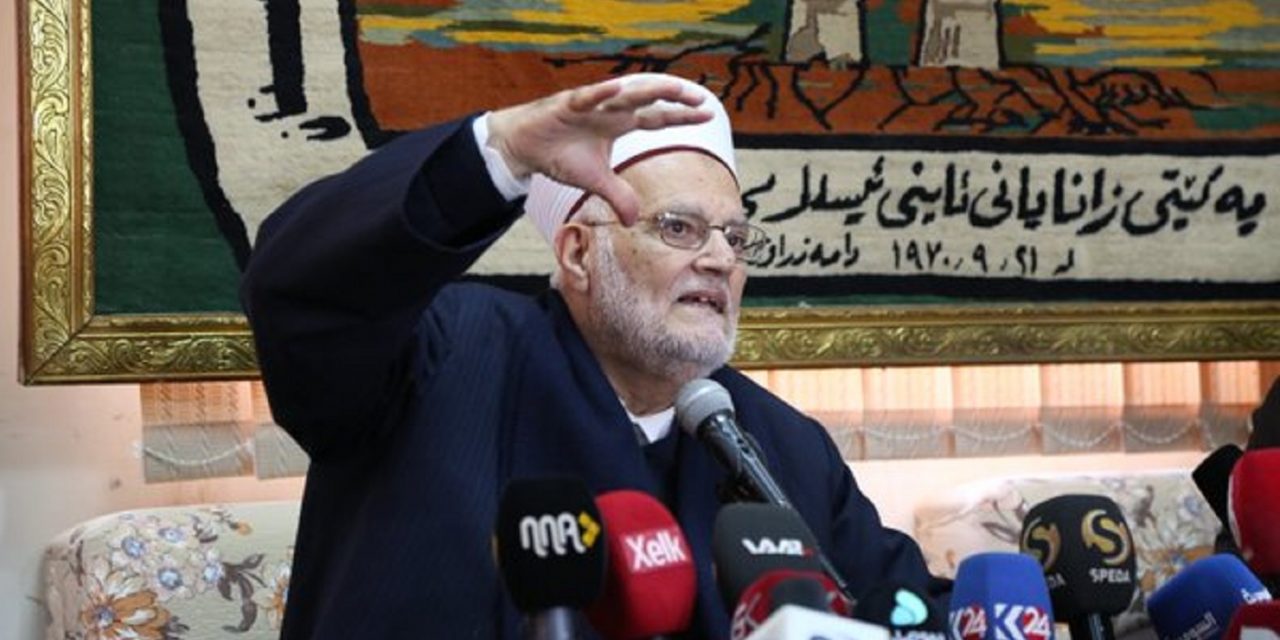 An Islamic extremist sheikh from Jerusalem was denied entry to UK after a CUFI petition reached more than 18,000 signatures in four days!

The former Grand Mufti of Jerusalem, a terrorist-supporting, Holocaust-denying anti-Semite who has previously called for the destruction of Britain and encouraged child martyrdom was DENIED entry into the UK, which prevented him from meeting MPs in the UK Parliament as he first planned.

On 31 August, CUFI learned that Sheikh Ekrima Sabri (the former Grand Mufti of Jerusalem and a current imam at al-Aqsa mosque) was coming to the UK in September and would be meeting with MPs in Parliament.

Knowing that Sheikh Sabri was bad news (see below as to why), CUFI got straight to work in finding evidence supporting why Sabri should not be allowed into the UK, let alone enter the Palace of Westminster. After breaking the story that evening to our supporters, we immediately launched a petition calling for him to be stopped. Next morning we issued a press release to various media outlets informing them of Sabri’s plans to visit MPs and provided them with evidence supporting our campaign to stop him.

The story of the “extremist sheikh”, based on the research and information provided by CUFI, made headlines in The Express, Breitbart and a number of Jewish outlets. And by the following Tuesday morning, after 18,000 petition signatures, we heard that Sheikh Ekrima Sabri had been denied entry to the United Kingdom.

EuroPal Forum, the pro-Palestinian organisation that had invited Sabri to the UK, issued a statement saying, “Sheikh Ekrima Sabri, the former Grand Mufti of Jerusalem” along with one other person “have both been unsuccessful in obtaining an entry visa for technical reasons, and therefore will not be joining the delegation.”

EuroPal claimed that CUFI’s petition “had no bearing on the decision”. However EuroPal’s statement did confirm that “the decision to withhold an entry visa to Sheikh Sabri” was carried out “by the UK immigration authorities”.

It is clear then that he was denied entry by UK immigration authorities. And we have no doubt that our petition, the media and the MPs who spoke would have been more than enough to pressure the government into blocking his entry.

What is interesting is EuroPal’s response to our petition. They accused “the Israel lobby” of attempting to restrict Palestinian rights and even called opposition to the Sheikh’s visit “a clear violation against the basic freedom of expression”. As you will see below, what Sabri has expressed is more than just talk. He is responsible for inciting violence against Israelis and should never be welcomed into our country.

We want to thank everyone who signed the petition, shared our campaign with others and prayed for Sabri to be stopped. It was our combined voice that made the difference.

We also want to thank everyone who financially supports CUFI. Your support enables us to be in this position to make an impact.

We believe that this is one of many more victories to come and we are galvanised to stand up stronger for Israel and Britain.

Sheikh Ekrima Sabri was appointed Grand Mufti of Jerusalem by Yasser Arafat in 1994 and served this position during the Second Intifada. He was effectively fired in 2006 by Mahmoud Abbas as his popularity with the Palestinian public was growing and his views became more extreme. When someone is fired for being too radical by the person who said, “we welcome every drop of blood spilled for al-Aqsa”, you know they must be extreme. Sheikh Sabri still holds a position as an imam at al-Aqsa and was involved in the recent Temple Mount escalations over the metal detectors.

Here are some of the reasons Sheikh Ekrima Sabri should NEVER be allowed in Britain:

His Call for Britain’s Destruction:

His Support for Child Martyrdom:

In an interview with Al-Ahram Al-Arabi, an Egyptian national newspaper, Sheikh Sabri said, “There is no doubt that a child [martyr] suggests that the new generation will carry on the mission with determination. The younger the martyr – the greater and the more I respect him… They [mothers of martyrs] willingly sacrifice their offspring for the sake of freedom.”

His Denial of the Holocaust:

In an interview with Italian newspaper la Repubblica, on his way to visit the Pope, Sabri responded to a question about the Holocaust by stating, “Six million Jews dead? No way, they were much fewer. Let’s stop with this fairytale exploited by Israel to capture international solidarity. It is not my fault if Hitler hated Jews, indeed they were hated a little everywhere. Instead, it is necessary to denounce the unjust occupation endured by my people.”

His Hatred of Jews:

In an interview with Al-Ahram Al-Arabi, an Egyptian national newspaper, Sabri stated “I enter the mosque of al-Aqsa with my head up and at the same time I am filled with rage toward the Jews. I have never greeted a Jew when I came near one. I never will. They cannot even dream that I will… they are the most cowardly creatures Allah has ever created…”

In a sermon broadcast on Voice for Palestine Radio, Sheikh Sabri called Jews “the descendants of apes and pigs”.

In a New York Times Magazine interview with Jeffrey Goldberg about the Temple Mount, he said “If the Jews want peace, they will stay away from [al-Aqsa]…This is a decree from Allah. The Haram al-Sharif [Temple Mount] belongs to the Muslim. But we know the Jew is planning on destroying the Haram. The Jew will get the Christian to do his work for him. This is the way of the Jews. This is the way Satan manifests himself…”

His Threats of Violence:

Important Notes: Sabri threatened “massacres and rivers of blood” just two months before the Second Intifada, otherwise known as the al-Aqsa Intifada, began. The intifada started from al-Aqsa, incited by Sabri, after Israeli MKs visited the site. Despite the Israelis receiving permission and assurances from Palestinian leaders that they could visit in peace, instead religious leaders like Sabri stirred up the Palestinian people to carry out a four year campaign of terror and violence against Israel which saw more than 1,000 Israelis (mostly civilians) killed at the hands of Palestinian terrorists, including over 140 suicide bombings.

His Denied Entry into France:

In 2012, Reuters reported that Sheikh Ekrima Sabri was barred from entering France on a similar visit to the country. The French authorities said at the time that his “call for hate and violence” presented “a strong risk of upsetting public order”.

This is just a small portion of the incitement and words of Sabri and ultimately the actions the Palestinians took based on his teachings.