How Israel remembered the Holocaust in 2019 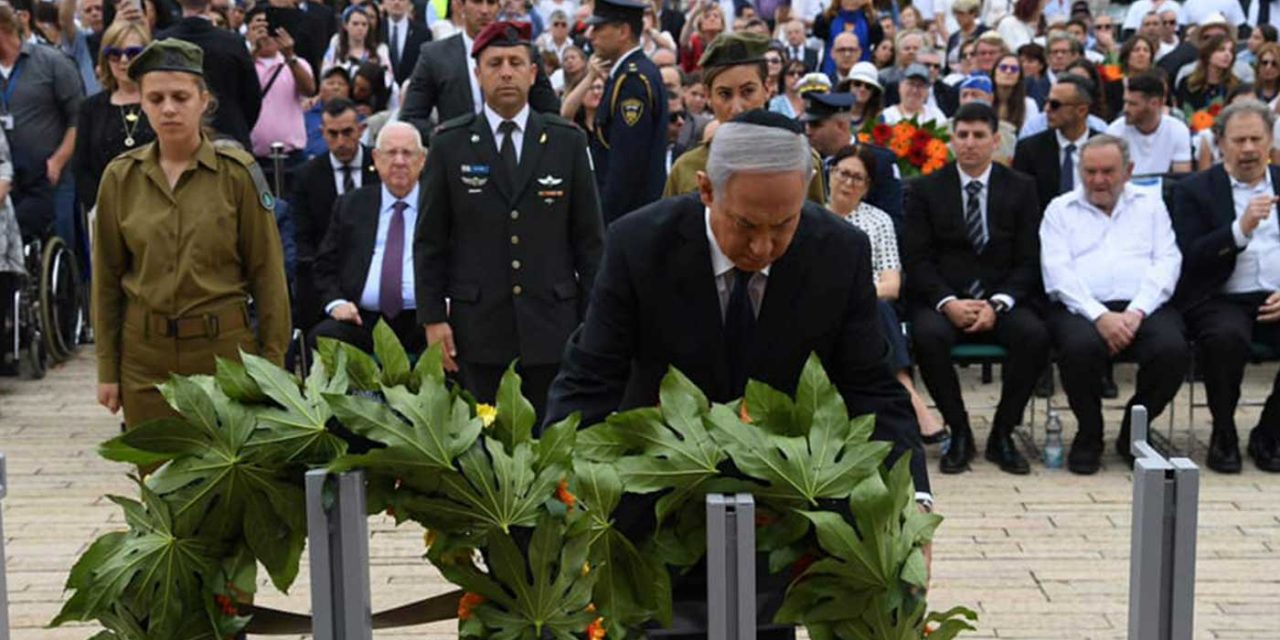 Yesterday was Yom HaShoah, the Holocaust Heroes’ and Martyrs’ Remembrance Day for Israel and the Jewish community. We wanted to share with you some of the special ways Israel commemorated this event and explain why there are two days to commemorate the Holocaust.

As many of you will be aware, in the UK and in other nations we commemorated this day earlier in the year. International Holocaust Remembrance Day was chosen to be 27 January each year. This is the date that Auschwitz was liberated in 1945. The date was chosen by the United Nations and adopted by the European Union, Britain and other nations. The date the camps were liberated seems like a fitting time to remember the date as it marks the end of what was the darkest days in history for Europe and especially the Jewish people.

In Israel and in Jewish communities, however, the day to commemorate the Holocaust falls later in the year.

Yom HaShoah, as the day is called in Israel, falls on the 27 of Nisan, the first month of the Jewish calendar. This date changes each year on the Gregorian calendar, and this year the day fell on 2 May.

It seems quite appropriate that the Jews have a separate day to remember this event. Just as it is important for the whole world to remember the Holocaust, it is also important for the Jewish community, the main victims of the genocide, to be able to commemorate the day in their own way. We also understand why many of us take the opportunity to commemorate the Holocaust on both occasions.

The Holocaust was the most brutal and horrific atrocity to ever be committed. Carried out by Hitler’s Nazis, more than 6 million Jewish people were slaughtered in European countries that Germany had occupied during World War II. It was the largest genocide in history. The Jews were vilified for decades, marginalised in society over a number of years and ultimately rounded up and slaughtered when the anti-Semitic feeling had reached its peak.

Sadly, anti-Semitism did not die out with the Nazis. In this day and age of growing anti-Semitism, it is important that we reflect on the actions that led up to the Holocaust, learn from them and take action so they don’t happen again. The world appears to be forgetting and so it is more important today than ever before that we remember the past. That is why Israel’s commemorations for Yom HaShoah are so important.

Israel pauses for a moment of silence

One of the most well-known ways Israelis commemorate this day each year is with a two-minutes silence and 2019 was no exception. At 10 am on 2nd May sirens began to sound throughout Israel and for two minutes almost everything came to a stop.

Highways that were busy before the siren suddenly come to a complete standstill and the drivers get out of there vehicles and stand next to their cars, often with the doors still open. Shopping malls too see busy shoppers suddenly stop, standing still where they were and bowing their heads in remembrance.

🔴 LIVE: Today, Jews in Israel and around the world commemorate those who perished in the Holocaust. In Israel, civilians stand silent for a moment to remember.📺 More i24ne.ws/jVMG30ohm5p

The siren, or Tzfirah as it is called in Israel, was passed into law in 1959 to be sound on the morning of the Holocaust Remembrance Day every year. It gives Israelis a prompt to stop what they are doing for two minutes so they can remember the 6 million Jews who were killed in the Holocaust. They do this so they never forget.

Even passengers of El Al flights took part in the commemoration.

Yad Vashem, Israel’s national Holocaust museum, hosted a televised Holocaust Remembrance ceremony which featured speeches from Israel’s Prime Minister Benjamin Netanyahu and President Reuven Rivlin, as well as musical performances and six Holocaust survivors were given the honour of lighting the traditional torches in honour of the six million who were killed.

Israel’s President Reuven Rivlin noted how Yom HaShoah was bringing Israelis from all political perspectives and walks of life together.

“For many years, the left and right in Israel fought over memory but today, the perspective of time allows us to try and find the way to remember together. ‘Their love, their hate and their jealousy have long since vanished’, we read in Ecclesiastes. No more left and right when it comes to the memory of the Holocaust, no more secular and religious, no more Zionists and non-Zionists, no more Sefardim and Ashkenazim, but one people remembering together, grieving together for its dead, our sons and daughters,” said President Rivlin.

The full event can be seen in the video below. The video is dubbed in English from the original Hebrew.

The March of the Living

Outside Israel, a very special way that Yom HaShoah is commemorated is with the ‘March of the Living’, an organised walk around Auschwitz.

Auschwitz death camp, located in Poland, was the largest of the German Nazi concentration camps and extermination centres. Over 1.1 million men, women and children lost their lives there between 1940 and 1945.

This year 10,000 people took part in the March of the Living through the camp, which is today an exhibition and education centre for the Holocaust.

“It’s an emotional roller coaster,” said participant Richard Goldhar, 34, who was participating in the march for the first time. He said visiting the death camps was anxiety-inducing.

WATCH: Holocaust survivors led the March of the Living on Thursday, Holocaust Memorial Day, from the WWII Nazi death camp Auschwitz to the Birkenau camp, in memory of those killed. Of the 6 million Jews murdered in the Holocaust, ~1.5 million died in the Auschwitz-Birkenau camp. pic.twitter.com/KpeN7uFSea

In 2019, 70 Holocaust survivors participated in the march, which is far fewer than the 500 survivors who took part in the first march in 1988. Naturally, the number of living survivors is decreasing each year, to the point where none will be left in the future.

Edward Mossberg, 93, a Holocaust survivor who lost all of his family in the death camps, and who has participated in the annual march for two decades, told reporters that he was there to honour the dead.

“Only the dead can forgive.”

Another survivor marching was 91-year-old Nate Leipciger, who has attended the event 21 times, including this year.

“The first time I walked here was in 1943, with my family, when we walked from the Judenrampe to Birkenau,” Nate said, referring to his parents and brothers and sisters who were being held captive by the Nazis in the camp. His whole family died at the camp.

“Now I came back with my family,” he said. His family now includes his three daughters, nine grandchildren and one great-grandchild. An amazing testimony that the Jewish people live on whilst the Nazi regime is no more.

Every person has a name

The Israeli Knesset (parliament) held its annual “Every Person Has a Name” ceremony, where Israeli MKs (Members of the Knesset) light candles in memory of the six million Jews who died in the Holocaust and the names of victims are read by Knesset members and staff.

This is a time when political parties put their many differences aside and come together in unity. 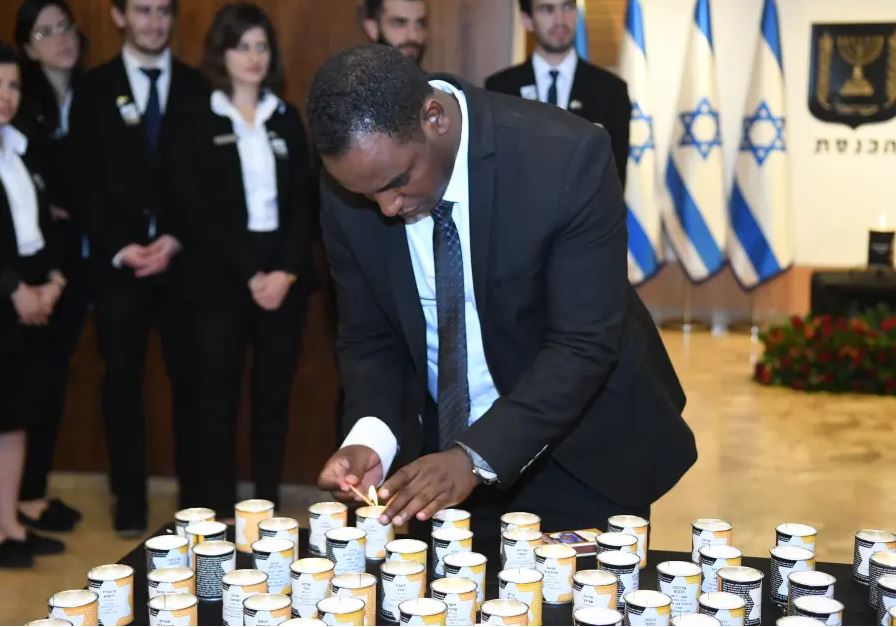 Freshman Knesset member Gadi Yevarkan lights a candle in memory of the victims of the Holocaust at the Knesset’s annual “Every Person Has a Name” ceremony, May 2 2019. (photo credit: KNESSET SPOKESMAN’S OFFICE)

Blue and White leader Benny Gantz, whose parents were Holocaust survivors, lit a candle, as did new Yisrael Beytenu MK Evgeny Sova, in honour of his relatives and the many thousands of other Jews who fought in the Red Army against the Nazis. Another of the candle-lighters was Rabbi Chaim Druckman, a Holocaust survivor born in Poland.

Druckman has 10 children, 80 grandchildren and 70 great-grandchildren; an amazing testimony that the Jewish people live on whilst the Nazi regime is no more.