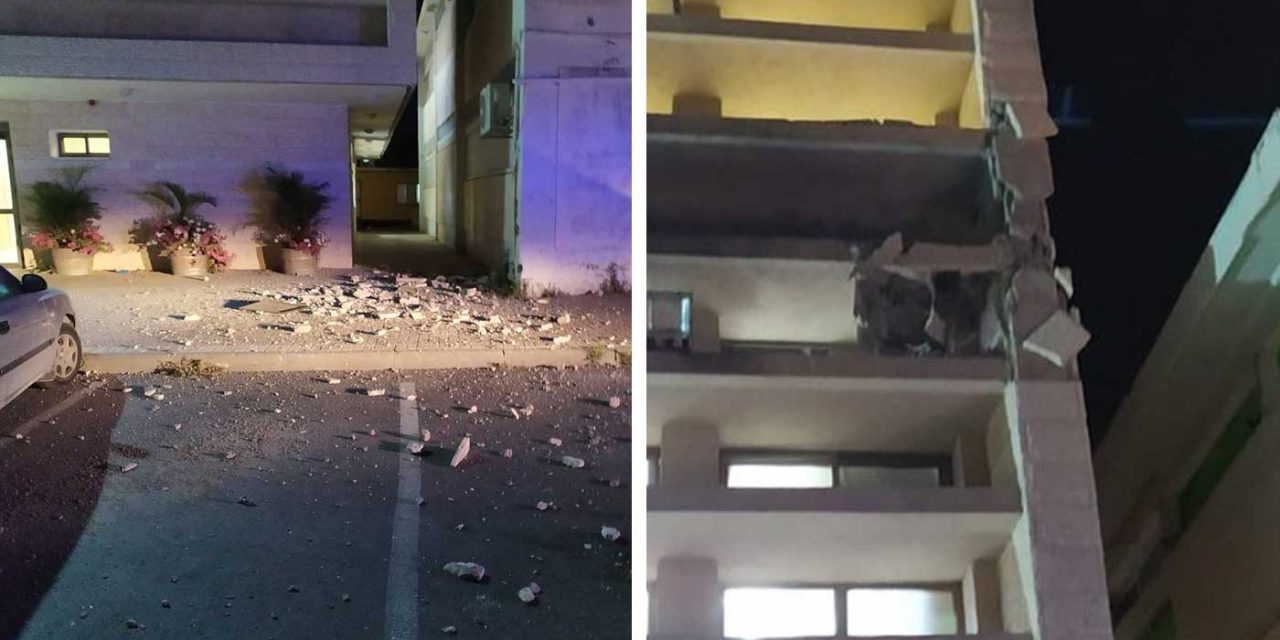 Most students had already left for the weekend, but several people at a religious school in Sderot had remained Thursday night. Three of them were just sitting down to study Psalms when a rocket alarm rang out just before 9 p.m.

Seconds later, a missile slammed into a wall just steps away, sending concrete and glass flying but leaving them unharmed.

Eyewitnesses said that had the rocket hit a few minutes earlier, when the main study hall was filled with students, or a few meters from where it did, it could have been a very different story.

Images from the scene in #Sderot showing the direct impact of the rocket on a civilian building. It’s going to be a hot weekend in the south… pic.twitter.com/X8zmwaqou3

“It happened two-three meters from me,” said Shalom Kahlon, a former student who was in the study hall at the time of the explosion, speaking to the Ynet news website.

“It hit the wall, three meters from there, that’s where I was sitting. If the rocket had been half a meter to the side I don’t know if I would be speaking now,” he added.

Inside this Chabad building in the Israeli city of Sderot, there is a synagogue and a school.

Palestinian terrorists in Gaza fired a rocket directly at it moments ago.

Thankfully, no students were injured by the blast. pic.twitter.com/KE0WuwPqBW

Kahlon and others described hearing a massive boom as the rocket hit the multi-story building housing the school Thursday evening, though there was no explosion from a warhead, which could have caused much greater devastation.

The strike still managed to break several tempered windows and leave a large hole in an outside wall where it made a direct impact, with concrete rubble strewn across a sidewalk below. Nonetheless, authorities said there were no injuries.

Israel planes carried out multiple airstrikes in the Gaza Strip early Friday in response to the terrorism from Hamas.

The Israeli military said in a statement that fighter jets and other aircraft attacked “several terror targets, including terror infrastructure in military compounds.”

The Israel Defense Forces said it also hit a base belonging to the Hamas terror group’s naval commando unit.

This is something everyone needs to understand: When Hamas attacks Israel it commits a double war crime.

When Hamas launched their rocket on Monday morning, they did so using Palestinian civilian communities as human shields. This is a war crime.

Their target was the Israeli civilian population. Targetting civilians is also a war crime.

This missile flew over Tel Aviv, past the international airport and landed on a family home, completely destroying the house, setting a neighbouring house on fire and injuring three generations of a British-Israeli family; grandparents, parents and children, including a baby. Their lives were saved because they made it to the bomb shelter seconds before the missile hit.

Hamas is an internationally designated terrorist organisation that has controlled the Gaza Strip since a violent coup in 2007. It has launched over 12,000 rockets and mortar bombs at Israeli towns. Every time one of these rockets is fired into Israel, the civilian population is the target. And every time, Israeli civilians rush for shelter and fear for their lives.

To repeat: Hamas uses Palestinian civilians as human shields whilst trying to murder Israeli civilians. This is a double war crime and the world should condemn such actions.

Sadly, too many have bought in to Hamas’s lies that Israel is “bad” and Hamas is “good”. Nothing could be further from the truth.

It is important to point out that every time Israel strikes Gaza it has only attacked military targets. And it has only done this in response to Hamas terrorism and war crimes. This is the complete opposite of Hamas.

Last night, Israel struck the offices of Hamas chief Ismail Haniyeh. Haniyeh uses his offices to run his brutal terrorist organization in a war of aggression against Israel. This is the kind of hate-filled rhetoric that is spouted by this leader.

What do you do at your office each day? Send emails? Create spreadsheets? Make phone calls?

Hamas chief Ismail Haniyeh uses his office in order to lead a brutal terrorist organization in a war of aggression against Israel.

We just destroyed his office. pic.twitter.com/26KGVlac7F

Israel is the most moral army in the world

Colonel Richard Kemp, who was the commander of British Forces in Afghanistan, was in Israel during its war against Hamas in 2014, and in the video below he gives his expert opinion on Israel’s army.

Israel is the most moral army in the world. Hamas, on the other hand, is a terrorist organisation that commits war crimes against its own people and the people of Israel. The world should be condemning Hamas.