Haley: US has put Iran “on notice” after transfer of missiles to proxies 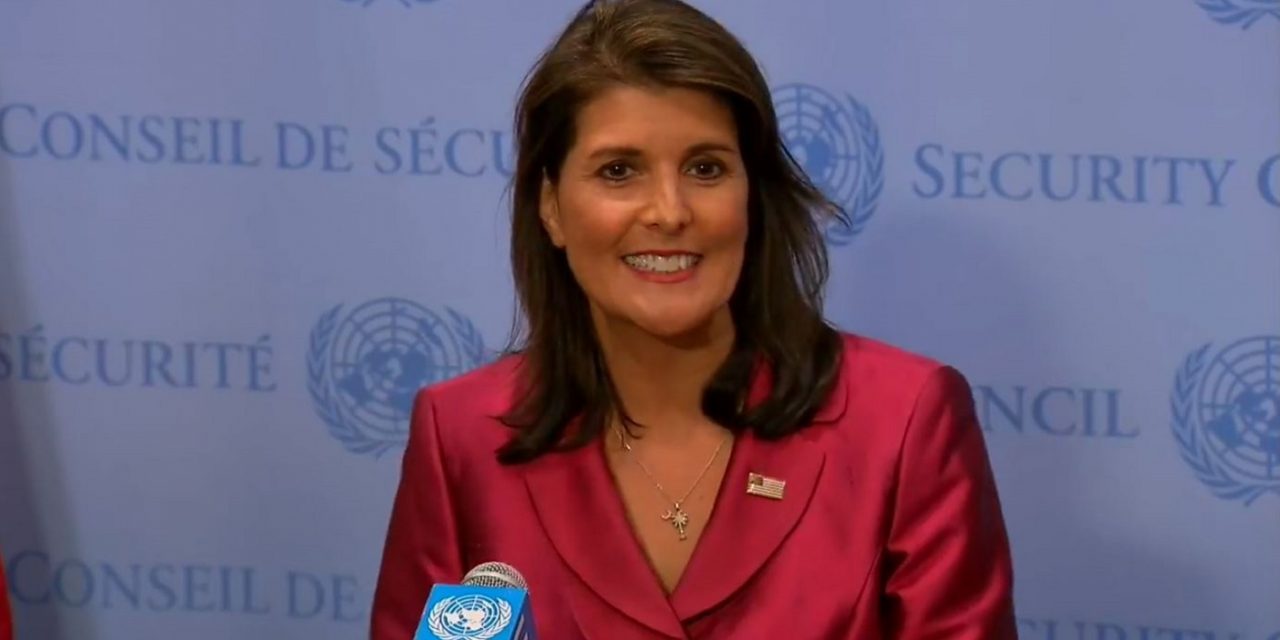 In her remarks at a UN Security Council briefing on the situation in the Middle East, US Ambassador to the UN Nikki Haley warned that “Iranian proxies in Iraq operate openly, with funding, training, and weapons supplied by Tehran. The Iranian regime has reportedly begun over the last few months to transfer ballistic missiles to these proxies in Iraq. It is reportedly developing the capability for its proxy militias to produce their own missiles inside of Iraq.”

“I have always been open about my belief that this Middle East debate has been excessively and unfairly focused on Israel. Today, I will go one step further. The Palestinian-Israeli conflict is serious and worthy of this Council’s attention. But if there is one country that is the source of conflict and instability in the Middle East – one country that merits a quarterly debate in the Security Council – that country is not Israel. It’s Iran,” she stated.

“In a blatant violation of Iraqi sovereignty, the Iranian regime recently fired a barrage of missiles from Iran into Iraq,” the ambassador charged. “Iran attacked the headquarters of the Kurdistan Democratic Party of Iran, killing 11 people. This was not an act of Iranian proxies but of the Tehran regime itself. It was Iran’s first direct military strike into Iraqi territory in over a decade. This Iranian interference in the sovereignty of Iraq should be of great interest to the Security Council for many reasons, not least of which is because it occurs in clear defiance of Security Council resolutions.

“Iranian General and head of the IRGC Quds Force Soleimani is leading an effort to influence the composition of a new Iraqi government. I remind my colleagues that Soleimani was banned from traveling outside of Iran by the Security Council in 2007. That ban was reaffirmed in 2015 with the passage of Security Council Resolution 2231. Despite this unambiguous travel ban, Soleimani has practically taken up residence in Iraq since the May elections. This fact was noted by the Secretary-General in the most recent 2231 Implementation Report. And let’s be clear about what Soleimani is up to in Iraq. He is not there to help create a government in Baghdad that is responsive to the Iraqi people. He is there to build an Iraqi government that is under the control of the Iranian regime.

“Iran treats Iraq like it’s not an independent nation. Iran sees Iraq as a transit point for weapons and a training ground for its proxies. Iran seeks to keep Iraq economically weak. Why? Because Iran wants to use a weak Iraq to illicitly fund its terrorist activities.”

“There is one more recent Iranian escalation that bears special consequence to Americans,” Haley continued. “Two weeks ago, two Iranian proxy groups launched rocket attacks on the American Embassy in Baghdad and the US. Consulate in Basra. Using proxy forces in Iraq does not give the Iranian regime plausible deniability when attacks like this occur. The Trump Administration does not, and will not, buy that. Iran could have stopped its proxies’ attacks. It chose not to, so the White House responded by putting Tehran firmly on notice. We hold the Iranian regime fully accountable for its proxies’ attacks on U.S. facilities and personnel in Iraq. And we will not hesitate to vigorously defend American lives.”

Haley said the US is “committed to working with Iraq to help it create an inclusive and independent government,” noting that Iran’s activities are pulling the Iraqi people backward.

“This is the very same conflict and division that Iran promotes in Syria, Yemen, Lebanon, and across the Middle East,” she said.

“All members of the Security Council who respect the principle of national sovereignty should be concerned. And all who respect the right to self-determination for the Iraqi people should come to their defense,” Haley concluded.