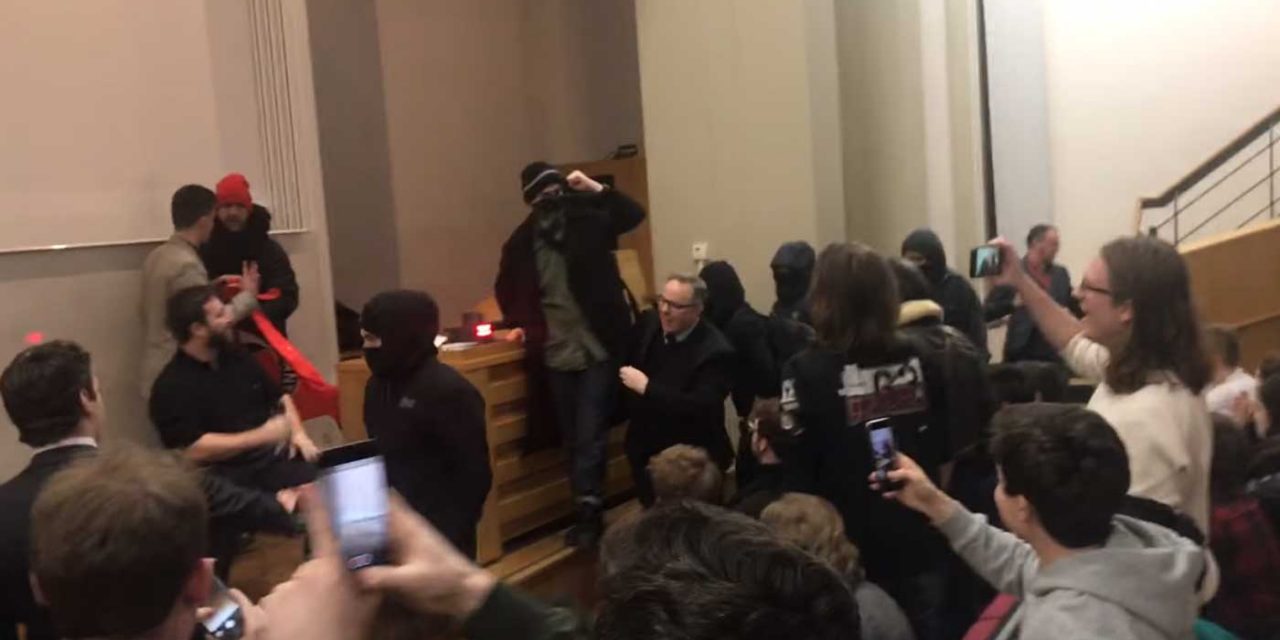 Monday night saw protesters force their way into a King’s College London lecture hall, injuring a security guard in the process, and disrupt a talk about free speech.

The meeting was not a pro-Israel event, however, one of the main speakers was Yaron Brook, is an Israeli and publicly speaks in support of Israel. The other speaker was Carl Benjamin who runs the YouTube channel Sargon of Akkad.

Yaron Brook posted the following comment on Facebook the day before the event: “I’m expecting significant protests from pro-Palestinian activists tomorrow at my event with Sargon at Kings College London.”

His expectations were correct as Palestine Solidarity Campaign (PSC) protested outside. They were joined by thugs who disrupted the event, attacking security guards, hospitalising one of them as well as setting off fire alarms, smoke bombs and smashing windows. PSC issued a statement following the protest in an attempt to distance themselves from the violence.

Footage of the event shows a group of black clad thugs breaking into the lecture hall and storming the stage. Some audience members start fighting with one of the protesters, with punches being thrown, and scuffles occur in various parts of the room.

A witness’s description of the moment the violent mob launched their unprovoked attack on the security guards.

‘Ten to 15 people dressed all in black, with black hoods and black face masks, leapt over the barriers and instantly engaged in a fight with two or three security guards,’ he said.

‘They tried to stop them but they just started punching them in the face. One guard, a grey-haired gentleman who looked to be in around 60, received several punches.

That guard was hospitalised with a gash to his head and bruising. It is unclear his condition.

The protesters carried flags in support of ANTIFA, a violent far-left group which claims itself as being anti-fascist whilst seemingly mirroring fascists themselves.

The full video of the talk and incident is here:

After the interruption, Benjamin and Brook gave the following video message on Facebook:

Tonight, a real tragedy for free speech and student activism occurred on campus. Speakers Yaron and Carl were invited this evening to discuss and debate their conflicting ideas. The event was meant to be academic, philosophical and open to criticism. In response, an aggressive group of antifa thugs broke into the university, with what we assume is cooperation from the far-left student societies who organised the protest. Security guards, speakers and attendees were assaulted. Smoke bombs were set off. The university, as a place of learning, was defiled. We demand that the 7 student societies who called for the speakers to stay ‘off campus’ take responsibility for the violence they have caused. We will not allow such events to deter us from our mission to protect free speech on campus. We will continue to actively call for a campus environment where words and ideas do not lead to violence. Please see this video below from Carl and Yaron.Thank you so much to everyone for your messages of support. Please keep the photos, videos and testimony coming.