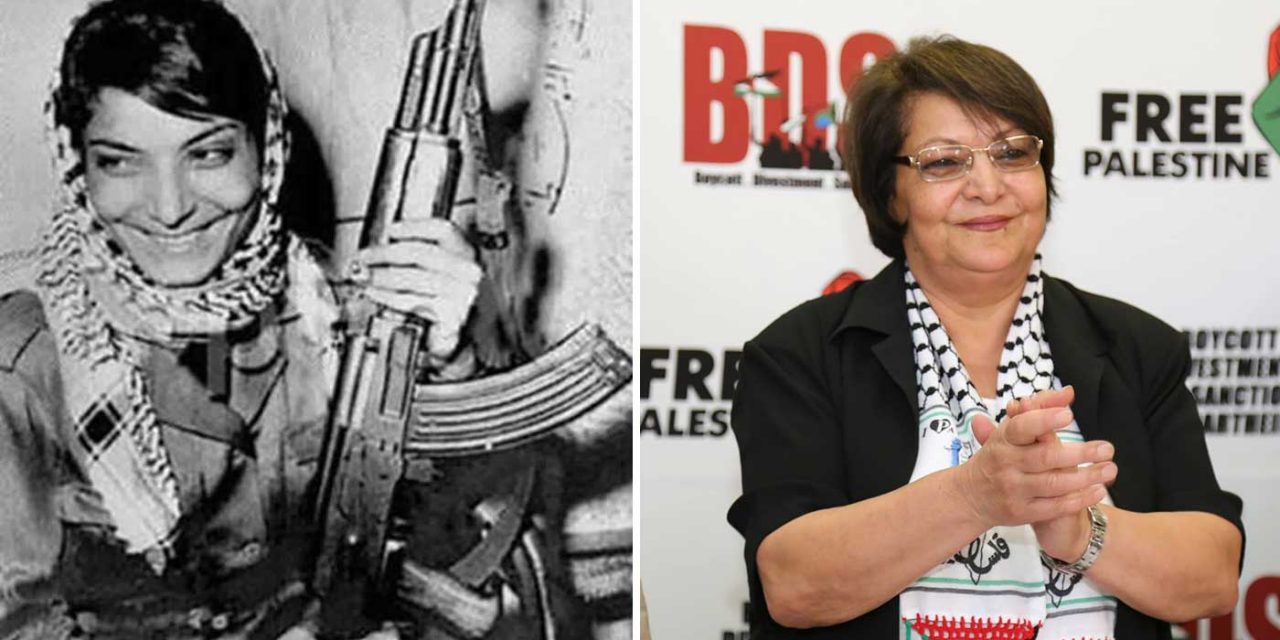 Just last month, EU ministers decided to keep the Popular Front for the Liberation of Palestine (PFLP) on their list of designated terrorist organisations, as it has done for the past fifteen years. Last night, however, the European Parliament welcomed Leila Khaled, famous for being “the first female hijacker” and a convicted Palestinian terrorist and a prominent member of the above mentioned terror group PFLP.

Khaled was a speaker at an event called “The Role of Women in the Palestinian Popular Resistance” which took place at the European Parliament in Brussels and was organised by a far-left Spanish party, which was a member of a larger group at the parliament.

The poster advertising the event clearly listed her affiliation to the terrorist group, listing her as “Leila Khaled – Popular Front for the Liberation of Palestine”.

(See below for more information about Leila’s terrorist past.) 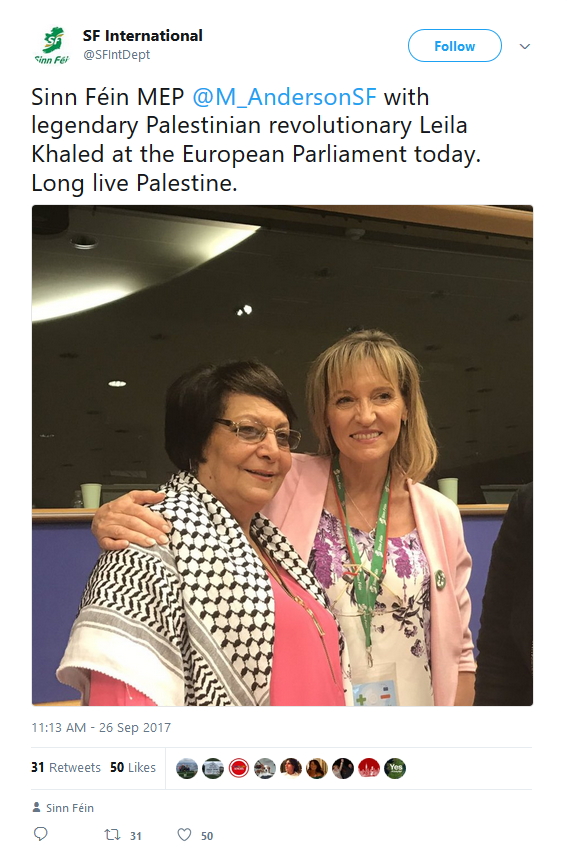 Sin Fein MEP, Martina Anderson, was one of the MEP’s proud to be at the event. Sinn Fein’s international twitter account tweeted a photo of Anderson and Khaled together with the words, “Sinn Féin MEP @M_AndersonSF with legendary Palestinian revolutionary Leila Khaled at the European Parliament today. Long live Palestine.”

Not everyone was happy to see Khaled in the parliament. Israel’s mission to the EU said “We are shocked that member of EU-designated terrorist organization PFLP is given floor at European Parliament.”

“It is an utter disgrace that a convicted terrorist is given a platform in the European Parliament to spew her hateful message,” said Daniel Schwammenthal, the director of the American Jewish Committee’s Brussels-based Transatlantic Institute.

“It would be a sad irony if parliament, only days after crucially setting up a special committee on terrorism, were to welcome and lionize as a ‘resistance fighter’ a convicted terrorist who was captured in 1970 while hijacking a commercial airplane,” he said.

“I was told the parliament’s leadership will neither invite Palestinian terrorists nor prevent them from speaking in parliament if other parties do invite them,” said Vistisen.

This policy means “Palestinian terrorists are free to be hosted in parliament quite regularly,” he said. “It undermines the credibility of the European Parliament.”

Interestingly, Guido Fawkes reported in May that Leila Khaled shared the stage with Jeremy Corbyn in both 2002 and 2011:

In July 2011 both Corbyn and Khaled were keynote speakers at a pro-Palestine conference organised by George Galloway in Lebanon. On 18 May 2002, Corbyn and Khaled spoke on the same stage at a pro-Palestine protest in London. At the event Corbyn called for a full trade boycott of Israel, insisting there should be “no trade” with the country at all. On the same stage where Corbyn spoke, Khaled is quoted calling for “victory” over Israel and claiming Zionism had “exceeded Nazism“.

A brief history of Leila Khaled’s terrorist past

Leila Khaled is credited as being “the first woman to hijack a plane” after she hijacked an American passenger plane in 1969 and landed it in Damascus where the two Israeli passengers aboard were “arrested” by Syrian officials and held for three months. These Israeli civilians were eventually released in a prisoner exchange when they were traded for Syrian prisoners of war being held by Israel.

This hijacking made her famous, with a picture of her holding an AK-47 rifle and wearing a kaffiyeh being widely published. However, she wanted to carry out further attacks, so she underwent six plastic surgery operations on her nose and chin to conceal her identity and allow her to continue her terrorist activities.

On 6 September 1970, Khaled was arrested aboard an El Al flight from Amsterdam to New York. She was trying to hijack the plane along with Patrick Arguello. Khaled had two hand grenades while Arguello had a gun, which he used to shoot and injure a member of the flight crew. Israeli air marshals who were aboard the flight shot and killed Arguello and overpowered Khaled. The pilot diverted the aircraft to London’s Heathrow airport where Khaled was arrested by British police.

Despite carrying two live hand grenades, and the fact that Arguello had shot someone, Khaled claims she was under strict orders not to injure anyone.

The hijacking was part of a series of hijackings carried out by the PFLP called the “Dawson’s Field hijackings” which took place in September 1970. The name comes from the Dawson’s Field airbase in Jordan, where three of the hijacked planes landed. One of these hijackings took place directly as a result of Khaled’s capture. A PFLP sympathiser hijacked a flight coming from Bahrain and ordered the pilot to fly to Dawon’s Field in order to pressure the British authorities to free Khaled.

On October 1, the British government did indeed release Khaled in exchange for hostages of the other hijackings.

Since that time Leila Khaled has been a face of Palestinian resistence and is a popular spokesperson for the PFLP. She encourages Palestinians to “resist occupation” using any means necessary, including terrorism.