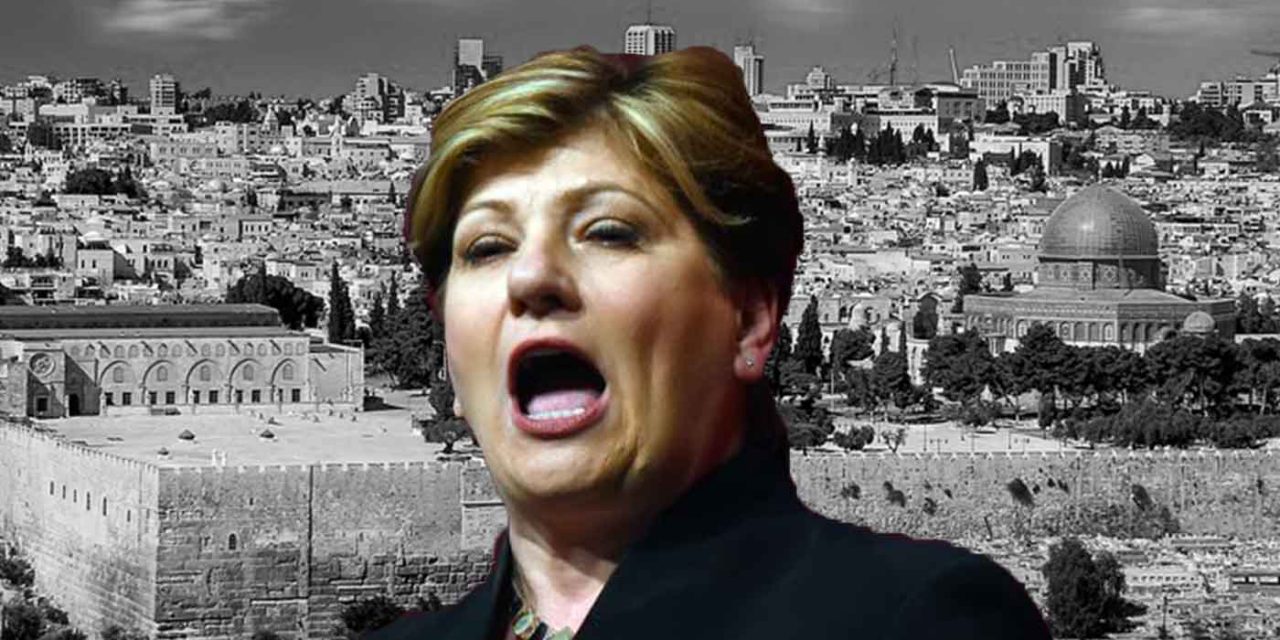 Shadow Foreign Secretary Emily Thornberry used a Labour Friends of Palestine and the Middle East fringe meeting at the party’s Brighton conference to pledge that the first priority of the next Labour government would be to recognise the state of ‘Palestine’.

Ms Thornberry declared that if she was to become foreign minister, “You can be assured that standing up for the Palestinians will be at the top of my list of priorities”.

She emphasised that such recognition would come “not in due course, not when the time is right, but now.”

The shadow minister added that there would be an immediate review of arms sales from the UK to Israel “to ensure that none of those weapons are being used to breach International law and attack innocent Palestinian civilians in Gaza or elsewhere”.

Worryingly, the UK’s attitude towards Israel at the United Nation would also take a drastic turn for the worst if Labour led the country.

According to Thornberry, Labour would “demand effective action to enforce” UN sanctions on Israel.

These biased resolutions against Israel are anti-Semitic to their core and our government should in no way support such measures, especially against our ally Israel, but Thornberry is adamantly against Israel on these matters.

Ms Thornberry said: “We would be prepared to say out loud that it shames the UN and the security Council that for decades, Israel has been allowed to ignore, with impunity, all the resolutions the UN has passed with regard to the Occupied Territories — illegal settlement building, detention of children, and indiscriminate violence against civilians — and we will demand effective action to enforce them.”

Israel is the most condemned nation at the United Nations. Despite representing only 0.1% of the world’s population, Israel has received 78% of the UN’s condemnations. In contrast, the Palestinian terrorists of Hamas have not received a single condemnation from the UN. This is why the United Nations is referred to as “the epicentre of global anti-Semitism”.

It is important to note that most UN resolutions passed against Israel are not legally binding and all of them are blatantly one-sided against Israel, ignoring the atrocities of the Palestinians and denying the Jewish history in Israel.

It is outrageous that Labour would support such biased resolutions against our ally Israel whilst ignoring the many human rights abuses and illegal actions of our enemies.

Sadly, this is the state of the modern day Labour party and Thornberry’s speech comes after the Labour Party Conference voted to end all arms sales with Israel and to support the Palestinian’s so-called “right to return”, effectively supporting the end of Israel as a Jewish state.

Leeds MP Fabian Hamilton, who is Shadow Minister for the Middle East, also spoke at the event, and although he is Jewish and was speaking to a mixed audience, he opened his remarks with “Salaam Aleikum”, an Islamic greeting. Echoing the Labour leadership, Hamilton declared: “We have to ensure that there is a state of Palestine and the next Labour government will absolutely ensure that we recognise that state”.

Both Thornberry and Hamilton tried to say that they are speaking from a position that is good for both Israel and the Palestinians, but clearly the position of Labour is biased against Israel and the truth of the Bible.

We must pray for our nation as we go through turbulent times, that the voice of truth will prevail in British politics and that our nation will stand steadfast at the side of Israel.