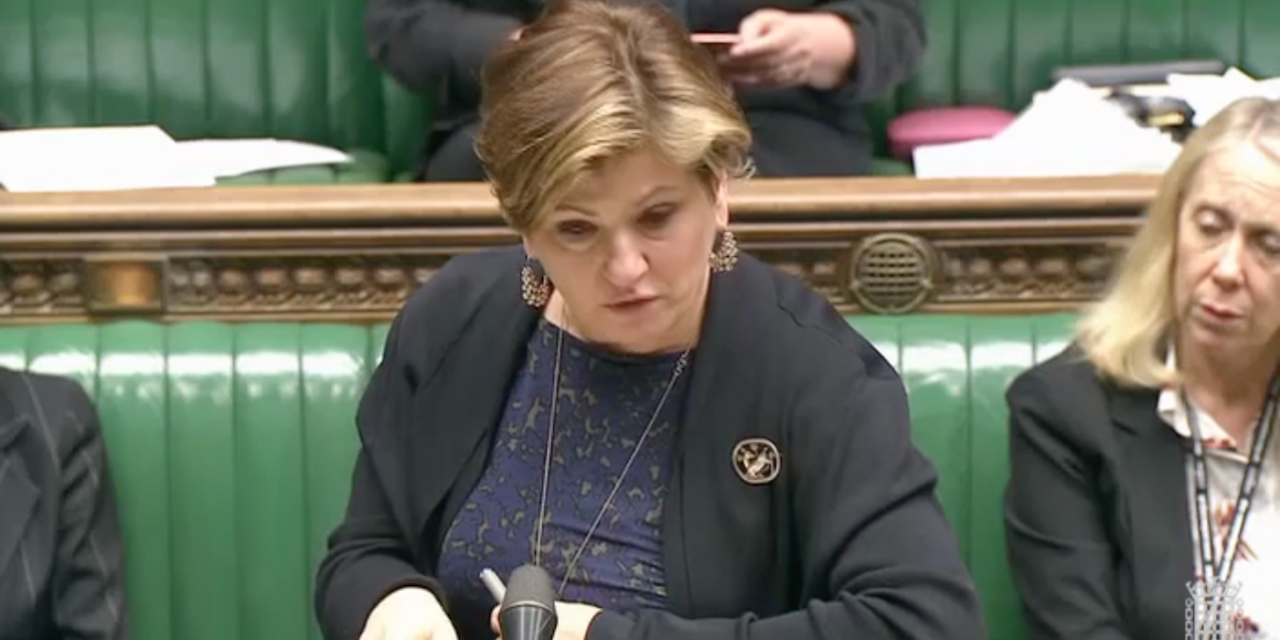 Britain’s Shadow Foreign Secretary, Emily Thornberry, has said that Britain should “mark” the centenary of the Balfour Declaration rather than “celebrate” it, and the best way to mark it was “to recognise Palestine”.

In an interview with Middle East Eye, Labour MP Emily Thornberry said, “I don’t think we celebrate the Balfour Declaration but I think we have to mark it because I think it was a turning point in the history of that area and I think probably the most important way of marking it is to recognise Palestine”.

Ms Thornberry is due to attend a gala dinner alongside Prime Minister Theresa May and Israeli Prime Minister Benjamin Netanyahu. When she was questioned about her decision to attend, she replied that she was also going to be attending a similar event with Palestinians as well.

Speaking of Benjamin Netanyahu’s current Israeli government, Ms Thornberry said it had “lost its way” and that they are “letting down the Israeli people” in its approach to the two-state solution.

“I feel that sometimes the Israeli government has lost its way. What are they now doing? Are they heading for a one state? It seems on the face of it that they may be. And in that way they are letting down the Israeli people because you cannot have a democratic, Jewish one state in that area. So they will have to choose.”

Below is a transcript of part of the interview she gave as well as a video:

MEE:  This week marks the 100th anniversary of the Balfour Declaration. Theresa May refused to apologise to Palestinians for Britain’s responsibility for what befell them as a result of that declaration. The declaration itself carried an important proviso that nothing should be done to prejudice the civil and religious right of existing non-Jewish communities in Palestine. If you were foreign secretary now, would you invite an Israeli prime minister to Britain to celebrate Balfour?

ET: I don’t think we celebrate the Balfour Declaration but I think we have to mark it because I think it was a turning point in the history of that area and I think probably the most important way of marking it is to recognise Palestine.

The British government have said they will do, it’s just a question of when the time is right and it seems to me this is the time.

I remember when [Palestinian President Mahmoud] Abbas came to Britain it was a few years ago and I was at a meeting with him and I said:” What would be the one thing you would want from us?” And he said;” recognition”.

MEE: Are you going to the dinner for Balfour? Do you feel uneasy about attending, given that there are no invitations to Palestinians?

ET: I am going to a Balfour meeting with Palestinians as well.

ET: It’s always difficult to be properly balanced. I try my best.

MEE: Would not you also expect a British government to make some proper complaints about Israeli policy on the West Bank. Today there is a story in Haaretz about an Israeli bill that would annex settlements in the West Bank to Jerusalem. Wouldn’t you expect a British prime minister to be very concerned indeed?

This is not the way forward. As somebody who has been a member of Friends of Israel since I joined the Parliamentary Labour Party, and I am a member of Friends of Palestine, it seems to me to be entirely consistent with a British politician in favour of a two-state solution you need to be friends with both sides. But friends need to speak the truth.

And I feel that sometimes the Israeli government has lost its way. What are they now doing? Are they heading for a one state? It seems on the face of it that they may be.

And in that way they are letting down the Israeli people because you cannot have a democratic, Jewish one state in that area. So they will have to choose.

And they are just going against the vision of [first prime minister of Israel David] Ben Gurion to have a democratic Jewish state and you need to have alongside it a secure viable Palestinian state.

And people seem to have forgotten this. Over the 20 or 30 years since I have been going to the area, one thing that strikes me is the separation of the peoples, the building of settlements.

But you know there was a time when Tel Aviv housewives would meet Palestinians, even if it was a Palestinian gardener, there was some kind of communication. But now it’s so difficult to get across the border.

I remember in 1982 driving all over the West Bank, backwards and forwards, there was no problem. The last time I went, it was almost impossible to get from Jerusalem to Bethlehem, because of the security situation. It is not just the settlements, it’s also the road closures, the security points, the flying posts which just makes a Palestinian state unviable.

MEE: What would you do as a government to express that formally to a government of Israel? What about arms sales, or buying products that came from settlements in the West Bank?

ET: I think it is important that the Israelis know that we are friends and that we fully understand the security of the Israeli people is important. What is a government first about? It’s about offering security to their citizens and that has to be a priority for them and you have to understand and recognise that.

MEE: Even though Israel expresses its security in terms of what it denies Palestinians?

ET: Yes, I know. It has to be consistent with basic principles which are that you don’t sell arms for internal repression. As for buying products, we need to buy products from Israel, but Labour policy is a clear one which is that settlement goods should be clearly labelled so that people should make their own choice. Products are not clearly labelled. Its EU policy but it’s not clearly enforced.

MEE: But you would not go as far as a boycott?

ET: It’s the boycott point. It would be up to individuals as to whether they bought them or not. It’s against our law for British firms to be investing in the West Bank and that has to be made clear. In Alexander Palace (in North London) there were estate agents who were selling holiday flats on the West Bank. That should not have happened. That should have been stopped.

MEE: Tony Blair has recently said he regretted the boycott of Hamas and the siege of Gaza. What is your reaction to that?

ET: Let’s see what happens to the rapprochement between Fatah and Hamas. I know there has been a number of times in the past when it has been hoped that Fatah and Hamas will work together and then it comes to nothing.

The people of Gaza need to be represented properly and they cannot simply be sealed in and ignored in the way that they are. And the future of the West Bank has to include Gaza and Gaza properly represented.

MEE: And how rigorous would you have been about Shai Masot (the Israeli embassy official) and his attempts to set up a youth wing for Labour Friends of Israel? When this was revealed, you said this amounted to an issue of national security. Masot has returned to Israel but there was no inquiry. Would you call for one now?

ET:  We have to put it in context of what seemed to be happening. Al Jazeera had uncovered evidence that the Israeli government were acting through the Israeli Embassy closely with Labour Friends of Israel to undermine one of the government ministers.

MEE: Should there now be an inquiry about it? Alan Duncan and Crispin Blunt were both targeted. This was a cross-party issue.

ET: Where we have got to is that a complaint was taken out against the broadcast. Ofcom has said that the broadcast stands. So I know that the Labour Party is looking at it and looking at what our appropriate response is and I cannot say any more about that.

MEE: There is a continuing Labour Party action?

MEE: It was not just the plotting against Conservative ministers, it was also the very clear collaboration between the Israeli Embassy and Labour Friends of Israel.

ET: It’s difficult because there is quite of a lot of Labour friends of this and Labour friends of that, where they do work quite closely with embassies and that is the truth. I don’t want to name any others, but the reality is that these groups do work closely together. I do not have a problem necessarily with that but I think the attempt to undermine government ministers was a different issue and it is serious.

MEE: So you were relaxed about Labour Friends of Israel pursuing a pretty clear agenda at Labour conference in what looked to be a very non-public way? £1m was offered at one stage for trips.

ET: It’s for trips. Lots of parliamentarians go to both Israel and Palestine paid for by a number of different groups. Our policy in the Foreign Office team is that we pay for them ourselves.

The full transcript of the interview can be found here.