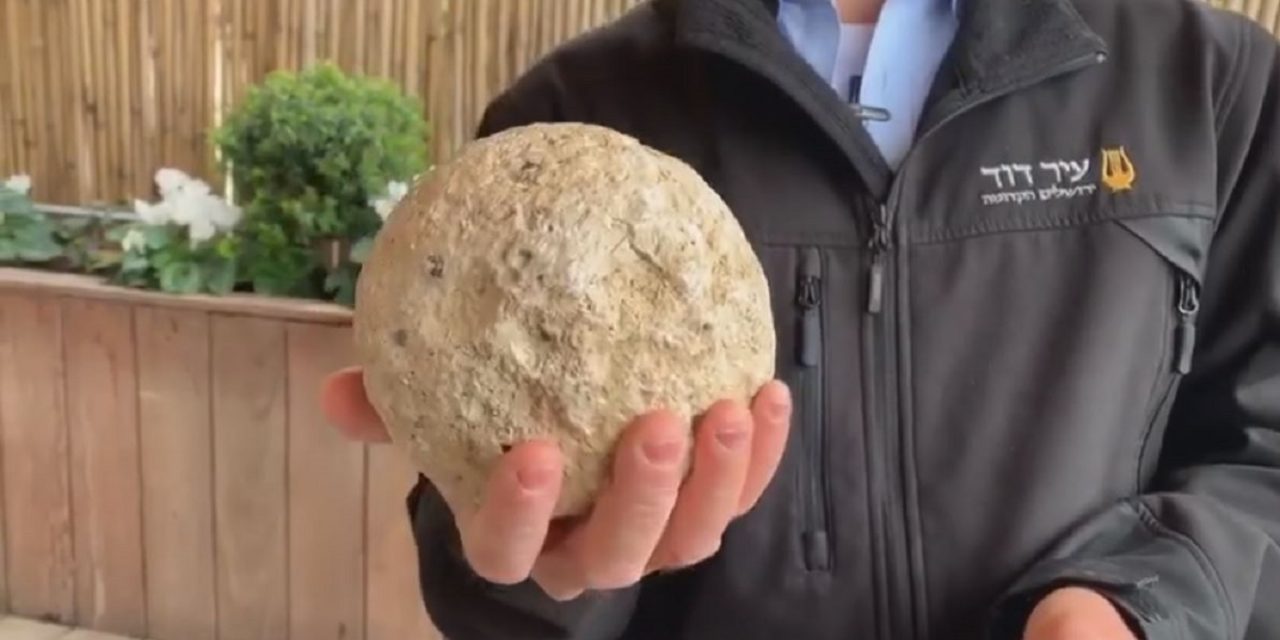 The Coronavirus pandemic has prompted an Israeli man, bearing guilt for stealing a Jerusalem archaeological artefact 15 years ago, to return the item to Israel’s Antiquities to clear his conscience.

The anonymous thief, who was a teenager on a school trip at the time, said through an advocate that whilst cleaning for Passover, he decided to return the 2,000-year-old catapult bolt to the City of David National Park with the Coronavirus crisis causing him to have a change of heart. He explained, “The time has come to clear my conscience. It feels that the end of the world is near.”

The Israeli citizen did not deliver the bowling-ball sized stone directly. Rather, he used a man called Moshe Manies, who agreed not to divulge the thief’s identity. According to Manies, the original theft occurred when two mischievous youths touring the park 15 years ago saw a display of ballista stones, which had been catapulted at fortifications and uncovered during excavations at the time.

“One of the boys took one of the stones home,” recounted go-between Manies in a Facebook post that drew the attention of the Israel Antiquities Authority. “Meanwhile, he married and raised a family, and told me that for the past 15 years the stone is weighing heavily on his heart. And now, when he came across it while cleaning for Passover, together with the apocalyptic feeling the coronavirus generated, he felt the time was ripe to clear his conscience, and he asked me to help him return it to the Israel Antiquities Authority,” said Manies.

15 years ago, an Israeli high school student stole a 2,000-year-old Roman catapult stone from City of David Ancient Jerusalem. The ongoing Coronavirus saga inspired him to have a change of heart. Join Ze’ev Orenstein from the City of David as he tells us the story behind the catapult stone and its return.#cityofdavid #catapultstone #jerusalem

Posted by Christians United for Israel (CUFI) on Wednesday, 18 March 2020

An inspector in the IAA’s Theft Prevention Unit, Uzi Rotstein, was tagged in one of the comments of Manies’s post. They arranged for a quick hand-off of the artifact. Taking the artifact from its archaeological context “negatively impacts the research and the ability to piece together its historical puzzle,” said Rotstein, who commended its return.

“These artifacts, which are thousands of years old, are our national treasure. They tell the story of The Land and of who resided here before us, and should be documented and displayed,” said Rotstein.

The remarkable story has caused IAA to use the opportunity to call on Israeli citizens to return archaeological finds to the State Treasury, so that the entire public can benefit from them.

The IAA’s Jerusalem Region Archaeologist Dr. Yuval Baruch explained in the press release that ballistae are a form of ancient weapons, which were used by forces besieging a city, and were used to hurl stones to cause forces on fortress walls to flee.

“The ballista stones which were uncovered at the City of David are most likely connected to the harsh battles between the besieged residents of Jerusalem and the soldiers of the Roman Legion, from around 70 CE – the year of the destruction of Jerusalem,” said Baruch.

Other locations in Jerusalem where similar ballista stones were uncovered include the Russian Compound near the estimated path of the Third Wall, which was the external wall of Jerusalem during the time of the Second Temple. “In the excavations of the Israel Antiquities Authority there, a battlefield was uncovered, with dozens of ballista stones scattered on the ground,” said Baruch.