The annual prize voted for by readers of the Berlingske newspaper was awarded to Dan Uzan, 37, who was shot outside Copenhagen’s Great Synagogue on Krystalgade in the city centre while working as a volunteer security guard during a bar mitzvah. 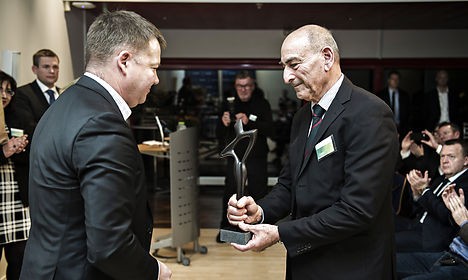 Sergeot Uzan receives the Dane of the Year award on behalf of his son. Photo: Niels Ahlmann Olesen/Scanpix

His death was one of two at the hands of Omar el-Hussein, a Danish Palestinian, in an attack that occurred less than a month after the shootings at the Charlie Hebdo offices in Paris.

The 22-year-old El-Hussein, who became radicalized during a stint behind bars, also attacked the Krudttønden café in Østerbro, killing 55-year-old film director Finn Nørgaard, before being shot and killed by police.

“[Dan Uzan] was killed while protecting others, while voluntarily guarding a synagogue while a terror attack took place in the city. He was not just protecting the people inside, who were celebrating a bar mitzvah, but also freedom of religion. He paid with his life,” said a statement given by the Berlingske Media group at the Dane of the Year prize ceremony.

“Dan was, first and foremost, a genuine everyday hero. He stepped up when he knew he was putting himself at risk,” said Rasmussen.

“Dan has now been honoured and recognized for the values he stood for. Not just in Denmark, but also in Europe and elsewhere in the world. This is something that provides a lot of comfort in our grief,” Uzan’s sister, Andrea Uzan, said in her speech.

The Dane of the Year prize is awarded annually to Danes who are considered to have “made the greatest difference in their field”. 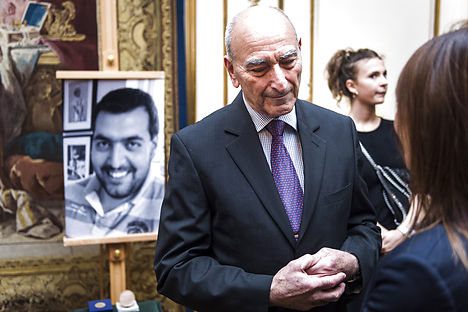 Sergeot Uzan received the award on behalf of his deceased son, whose photo can be seen in the background. Photo: Simon Skipper/Scanpix