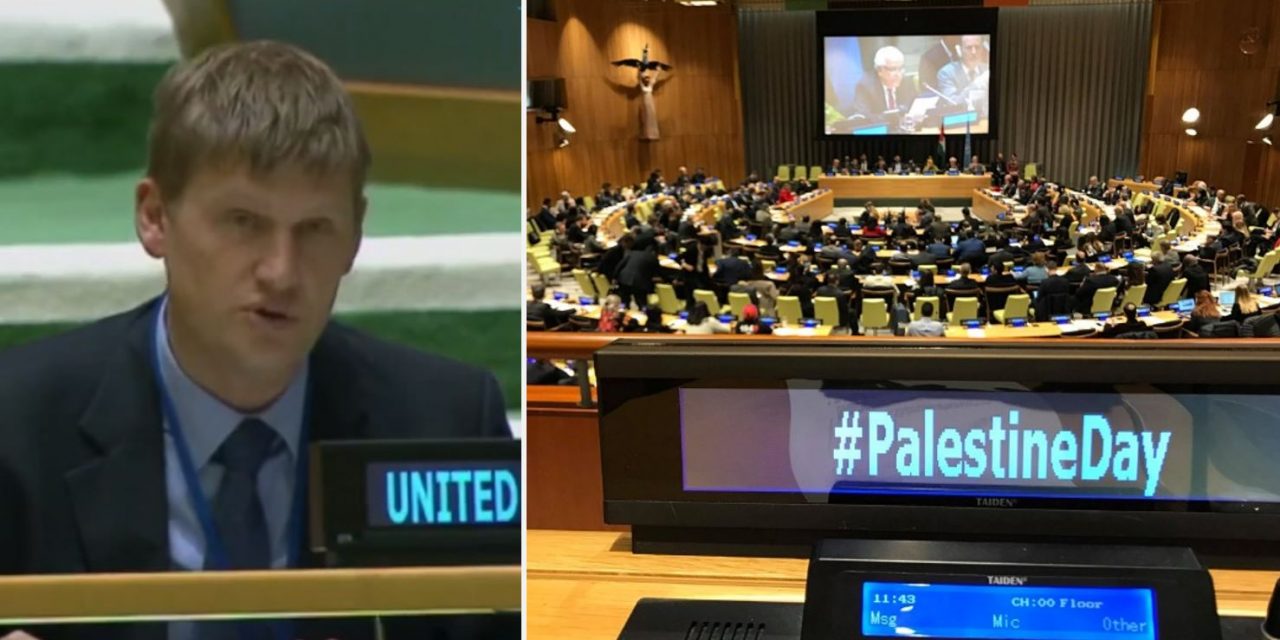 The UK has broken from the EU and sided with US and Canada by voting against an anti-Israel resolution sponsored by Syria at the United Nations.

The UN yesterday condemned Israel in six Arab-sponsored resolutions, including the adoption of a text on Jerusalem which called Temple Mount by its Islamic name only and a separate resolution condemning Israel’s presence on the Golan Heights. However the UK broke for the first time from the EU’s common position to join the US  and Canada in opposing the Syrian-sponsored resolution.

The British delegate told the assembly the UK voted ‘no’ because “resolutions which undermine the credibility of UN bodies risk hardening positions on both sides, and do little to advance peace or mutual understanding,” he said. “It is unnecessary, and disproportionate.”

“The Syrian regime’s intent is to use this additional resolution to deflect attention from its own criminal actions and indiscriminate slaughter of its own citizens. The duty of the General Assembly is to draw attention to international humanitarian law violations, wherever they occur. This resolution risks discrediting that vital responsibility,” added the UK delegate.

The UN General Assembly’s annual Syrian-backed resolution condemned Israel for not giving the Assad regime control over the Golan and its 20,000 Druze residents. The resolution passed with 105 in favour, 6 against and 58 abstentions.

UN Watch points out that while some called the resolutions balanced because some refer to “provocations, incitement and violence” by “all sides,” in fact Israel is repeatedly condemned and singled out expressly, while no such accountability or condemnation is applied to the Palestinian Authority, Hamas or Islamic Jihad.

By contrast, in this year’s session there will be a total of 6 condemnatory resolutions for the rest of the world combined — with only one each on Syria, North Korea, Iran, Crimea, Myanmar, as well as one on criticizing the U.S. embargo on Cuba.

“The U.N. assault on Israel today with this torrent of one-sided resolutions is surreal,” said Neuer.

“Today’s resolution on Jerusalem refers to the Temple Mount exclusively by its Islamic name, Haram al-Sharif. At a time when even  UNESCO no longer tolerates this terminology, the General Assembly should not be engaged in the denial of Jewish and Christian heritage.”

“While there will be a total of 20 resolutions against Israel this session, not a single U.N. General Assembly resolution is planned today or this year for gross human rights abusers such as Saudi Arabia, Turkey, Venezuela, China, Cuba, Pakistan or Zimbabwe.”

“At a time when Palestinian President Mahmoud Abbas and his state-controlled media incite to the continued stabbing and shooting of Israeli Jews, the U.N.’s response is to reflexively condemn Israel in six separate resolutions, each of them one-sided, each of them utterly silent on Palestinian abuses.”

“Today’s Golan resolution, the second on the area this session, absurdly demands that Israel give over the heights and its 20,000 Druze residents to the control of the genocidal Assad regime.”

“It’s astonishing,” said Neuer. “After the Syrian regime has killed its own people by the hundreds of thousands over six years, how can the U.N. call for more people to be subject to Assad’s rule? The timing of today’s text is morally galling, and logically absurd.”

“Today’s resolutions claim to care about Palestinians, yet the U.N. is oblivious to the dozens of Palestinians who have been slaughtered, maimed and expelled by Assad’s forces, and more than 3,000 victims killed since 2011.”

“Today’s farce at the General Assembly underscores a simple fact: the U.N.’s automatic majority has no interest in truly helping Palestinians, nor in protecting anyone’s human rights; the goal of these ritual, one-sided condemnations remains the scapegoating of Israel,” said Neuer.

“The U.N.’s disproportionate assault against the Jewish state undermines the institutional credibility of what is supposed to be an impartial international body. Politicization and selectivity harm its founding mission, eroding the U.N. Charter promise of equal treatment to all nations large and small,” Neuer added.

For CUFI’s analysis on Bias against Israel at the UN, CLICK HERE