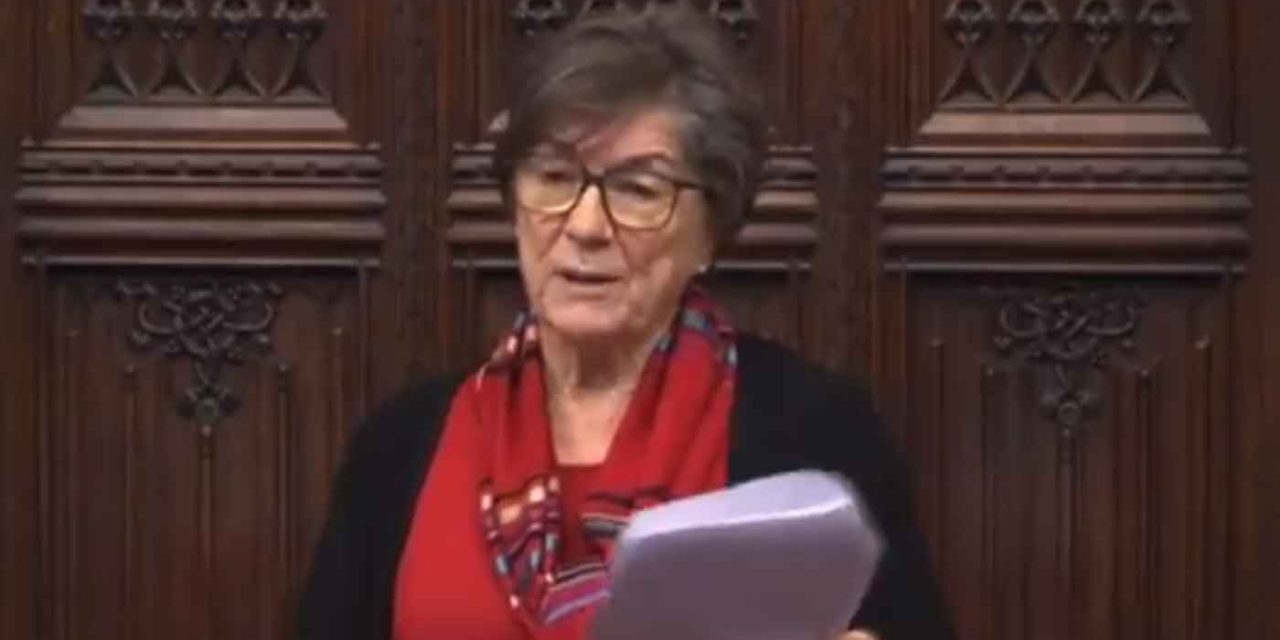 Baroness Jenny Tonge has called Israel the “puppet master” of America in a scathing attack on the Jewish state and President Trump’s peace plan.

During her speech in the House of Lords on 27th February, Baroness Tonge, who was kicked out of the Lib Dems over anti-Semitism, challenged the government’s claims of freedom after Brexit and used an anti-Semitic trope to do so.

“We hear so much about it from the Prime Minister. If we are set free, we can now have our very own foreign policy, independent of anyone else”, Tonge said. “Can the Minister assure us that we will do just that and not allow our country to fall under the shadow of the United States of America and its puppet master, Israel?”

This is an anti-Semitic trope about Jewish control and should be condemned by all. Sadly, the other members of the House of Lords failed to pull her up on this particular anti-Semitic remarks.

Baroness Tonge – who was kicked out of the Lib Dems for Antisemitism – has just used a speech to describe Israel as 'America's puppetmaster' 😬 pic.twitter.com/MYjNYmo0tL

As well as using anti-Semitism, Baroness Tonge also falsely described Israel as being “apartheid” during the debate and seemingly defended Hamas.

“Hamas, of course, is blamed for almost everything,” Tonge said. “Last night it was pointed out to me by a colleague that in the 181 pages of the so-called plan for peace and prosperity, Hamas is mentioned 181 times. There is an obsession with Hamas.”

Hamas is the terrorist organisation which runs the Gaza Strip. It has brutally suppressed the Palestinian people and carried out numerous terrorist attacks on Israelis, responsible for the deaths of innocent Jewish and Palestinian lives. Israel and the US have every right to be “obsessed” with the threat posed by Hamas.

Baroness Tonge, like her friend Jeremy Corbyn, has met with Hamas officials in various trips to the Palestinian territories. So it is little wonder that she is appearing to defend this terrorist group whilst she speaks out against Israel.

The debate was supposed to be regarding President Trump’s Middle East Peace Plan. The debate, however, had numerous anti-Israel contributions and the labelling of Israel as “apartheid” was all too common.

Speaking on behalf of the government was Lord Ahmad, the Minister of State, Foreign and Commonwealth Office and Department for International Development, who reaffirmed the UK’s position on the Israel-Palestinian situation.

Lord Ahmad said, “the UK’s position on the Middle East peace process is clear and… has not changed. Our view remains, clearly, that the best way to achieve peace, as the noble Lord, Lord Collins, stated, is through substantive peace talks between the parties, leading to a safe and secure Israel living alongside a viable and sovereign Palestinian state based on the 1967 borders with agreed land swaps… with Jerusalem as the shared capital of both states and with a just, fair, agreed and realistic settlement for refugees.”

Sadly, the UK’s position on Israel goes against Biblical teaching, with the British government still seeking to divide Jerusalem. It is CUFI’s position that Jerusalem should remain the undivided capital of Israel and the Jewish people.

Not only does this debate show we have a long way to go in address the UK’s relationship with Israel, but it is also concerning that a Baroness can spout anti-Semitism within the House of Lords and not be challenged on her views. More must be done to tackle anti-Semitism within British politics.