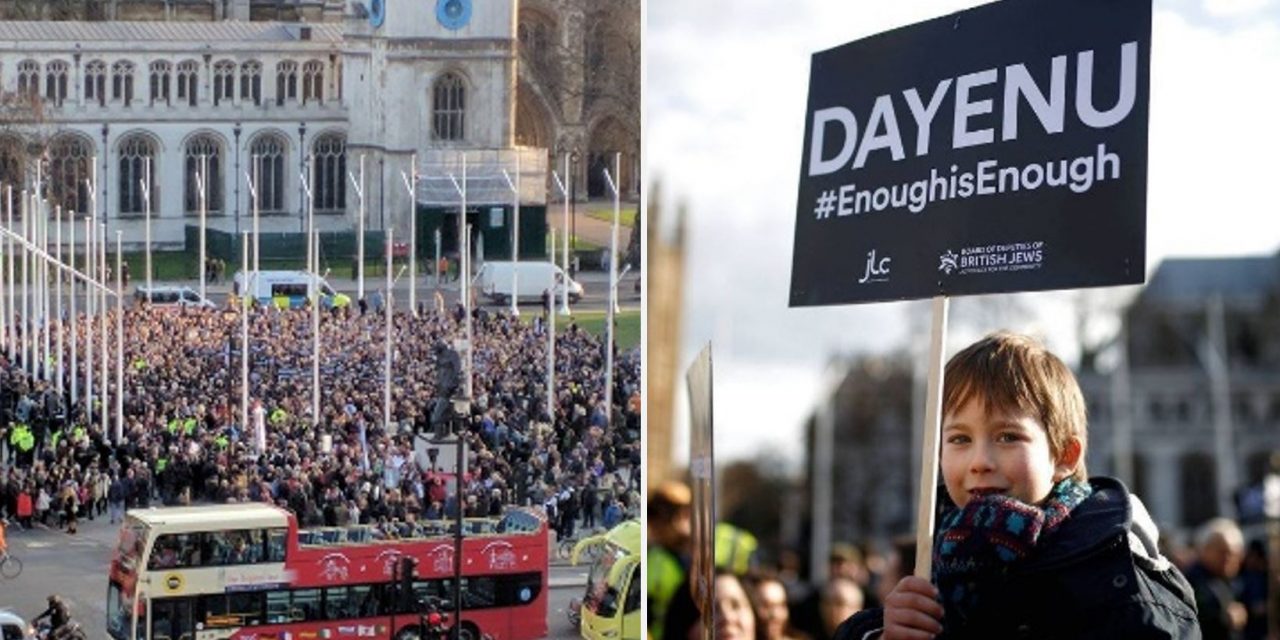 “We’re here to tell Jeremy Corbyn that enough is enough”.

These were the words of JLC Chair Jonathan Goldstein as he addressed the huge crowd that had gathered at Parliament Square on Monday evening at the unprecedented display of public protest against Labour’s actions towards antisemitism.

Around 2,000 members of the Jewish community and others joined community leaders and politicians from across the political spectrum demanding an end to “fake” statements and the start of decisive action against antisemitism in the Labour Party.

WATCH ALL THE SPEECHES HERE

A line-up of speakers spoke of their sorrow at having to resort to such an event, stressing that protesting against a major political party was unprecedented.

Jonathan Arkush, President of the Board of Deputies, which co-organised the protest with JLC, said he’d never before seen such anger towards a major political party, adding: “I hope today’s event will never be repeated.”

Thank you to the 2000 people who said #EnoughIsEnough tonight in Parliament Square. pic.twitter.com/jnpXlJB4OB

With only 24 hours notice, thousands turned up to protest against antisemitism in the Labour Party today. Thank you.#EnoughIsEnough pic.twitter.com/mRhv5gtWNp

Mann, who led the fight against Ken Livingstone following his comments about Hitler and Zionism, apologised “on my behalf and on behalf of every MP that you’ve had to take the time to come here today. What on earth is going wrong with our party when this event has to be considered? We are not prepare to accept anyone staying in our party who is a racist.”

He called on Corbyn to “say tonight that every anti-Semite is expelled immediately. Nothing less will do”. And he warned: “The very existence of the Labour Party is at stake.”

While no speaker went near calling for an end to Corbyn’s leadership, there were occasional outbursts from the audience urging such a move.

UPDATE: Read Jeremy Corbyn’s letter to the Board of Deputies and JLC

To give more context to the size of the #EnoughIsEnough crowd 👏👏👏 pic.twitter.com/9HmdUUlC3j