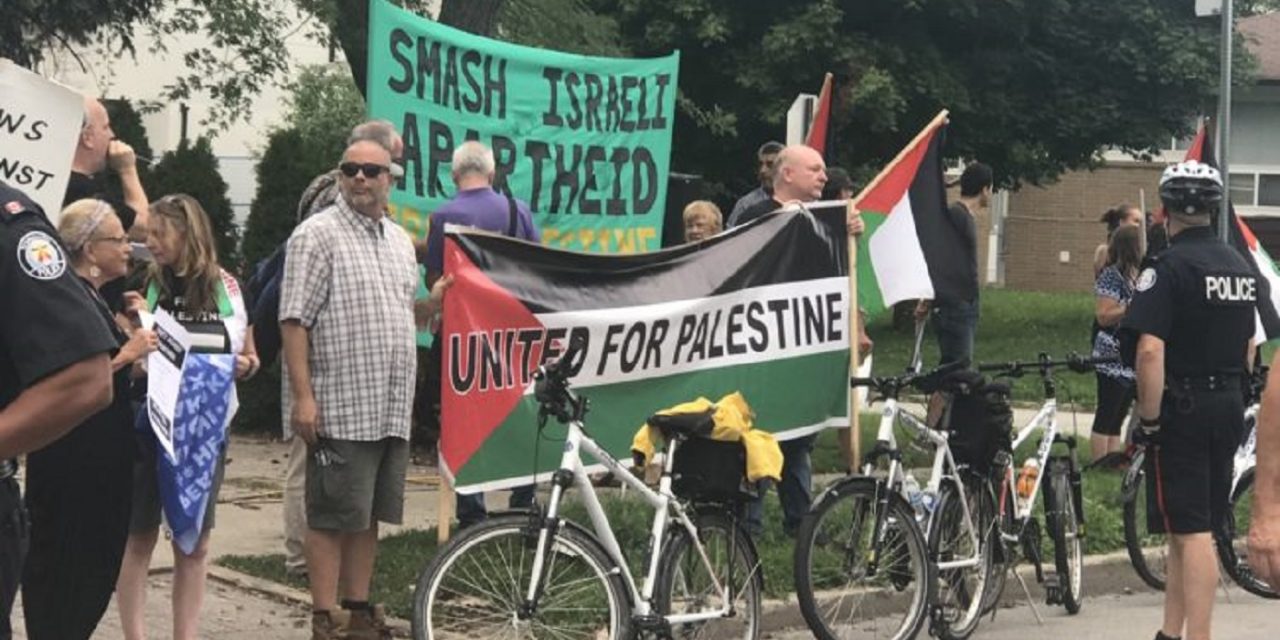 A group of 80 pro-Palestinian activists held a fiercely anti-Israel rally in a Toronto residential area in the heart of the Jewish community to protest B’nai Brith Canada’s “smear campaign against the Canadian Union of Postal Workers(CUPW),” which recently developed a partnership with the Palestinian Postal Service Workers Union.

The Palestinian union has glorified Palestinian terrorists on its official Facebook page.

The event was organized by former Green Party Justice Critic Dimitri Lascaris, an anti-Israel activist who recently lost a lawsuit against B’nai Brith. Toronto lawyer Stephen Ellis was a co-organizer of Wednesday’s gathering. B’nai Brith noted in a report on its website.

“In a Facebook post ahead of the rally, Ellis urged attendees to “confront” Zionists and shared a list of chants, some of which promote violence and obvious falsehoods, including ‘Resistance is justified when people are occupied!’ and ‘We know what that building’s for! Occupation and war!’” the report said.

The rally was not limited to protesting B’nai Brith, as speakers condemned the “colonialist…apartheid” State of Israel and protesters, including CUPW union members, chanted slogans such as “From the river to the sea, Palestine will be free.”

A sign read, “B’nai Brith and [Councillor] James Pasternak, If you slander and defame supporters of Palestinian Rights, we just might bring more Peaceful Protests & Complaints to your front door.”

“I can tell you we were not intimidated. What it did was galvanize the community,” B’nai Brith Canada CEO Michael Mostyn told the Toronto Sun in an interview, referring to the approximately 200 counter-protesters who showed up, organized by JDL Canada.

“There are Holocaust survivors who live here,” Meir Weinstein, national director of JDL, which organized the counter-protest, told the Sun. “There is a synagogue dedicated to the holocaust just one minute away. This was very offensive to come here.”

“This was by no means a ‘spat’ between B’nai Brith and the organizers of this rally, as some have suggested,” Mostyn said. “We merely pointed out that CUPW was aligning itself with an organization that glorifies terrorists. The fact these demonstrators travelled to demonize Israel at a Jewish community centre, in the heart of a Jewish residential neighbourhood in Toronto, shows how far these provocateurs have already crossed the line.”