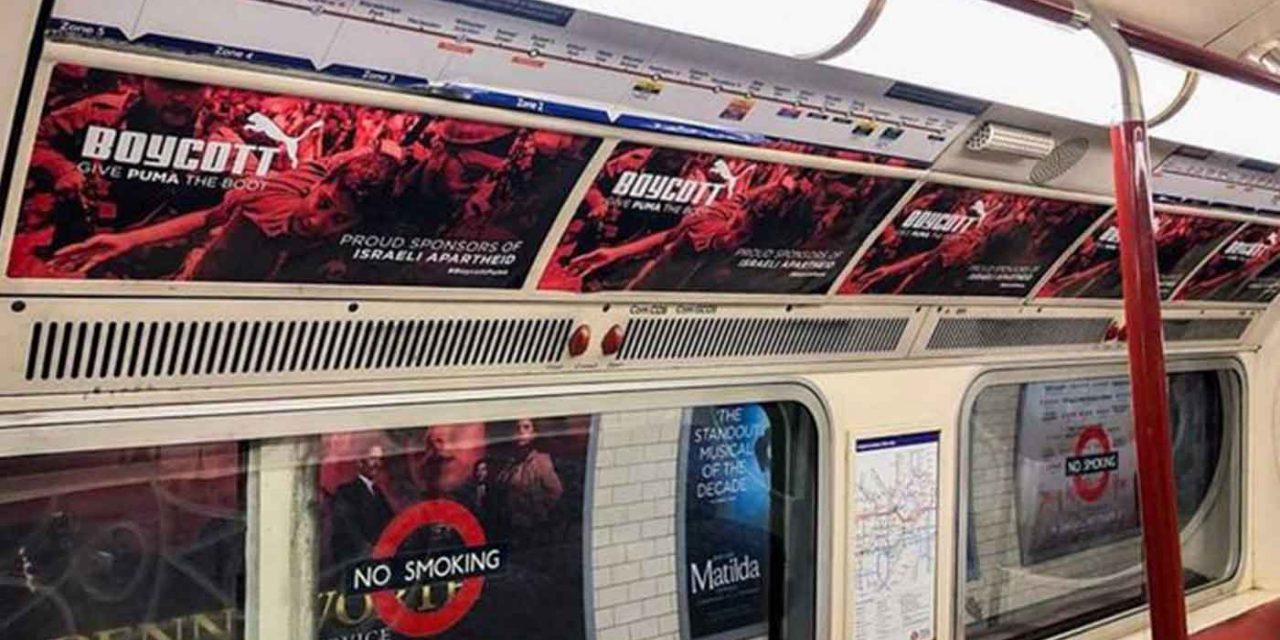 The anti-Israel haters have once again broken the law in order to spread their anti-Semitic propaganda on the London underground.

The adverts feature the words “Boycott – Give Puma the Boot” and claim Puma are “proud sponsors of Israeli apartheid”. The adverts were illegally placed on the tube and they also use Puma’s logo, and are defamation against the company, which is also unlawful.

@TfL hope you’ll be passing on this information to @metpoliceuk. Clear who posted these which is an offence and that you will be doing everything possible to bring about prosecutions? pic.twitter.com/6c8RRpC53z

The anti-Israel BDS movement hailed the “subvertising” (creating spoof adverts) of Puma and have called for people to get involved in the anti-Semitic day of boycotting Puma on 26 October – which if you want to counter anti-Semitism, maybe consider supporting Puma on that day.

The boycott campaign against Puma is nothing more than hysterical fake news.

The BDS outrageously accuses the global sportswear manufacturer of being “involved in violations of international law and human rights”, simply because it sponsors the Israel Football Association (IFA).

This call to action against Puma is also the perfect view of how hypocritical the boycott movement is against Israel. Puma is not responsible for the actions of any country, it simply sponsors teams within countries.

Sussex Friends of Israel has helpfully highlighted that Puma sponsors teams in Turkey, Qatar, United Arab Emirates, Cuba, Egypt, Morocco and many other countries with questionable human rights records. There is no global boycott campaign against any of these countries. There is only a boycott campaign against Israel, because the BDS movement is anti-Semitic at its core, singling out the only Jewish country in the world and ignoring real abusers of human rights.

This is a list of all of the countries, individuals etc that are sponsored by Puma. It includes teams or individuals from Turkey, Qatar, UAE, Cuba, Egypt, Morocco & others that have appalling records on human rights. Guess which is the one the @BDSmovement has a problem with? pic.twitter.com/xnu1GaE3rJ

Sadly, some people are being fooled into supporting this anti-Semitic boycott. It appears Donegal Celtic, a football team in Belfast, have joined the protest and are supporting calls to boycott Puma.

Let’s pray against this anti-Semitic boycott movement and continue to raise our voices in support of Israel and the Jewish people.