Al-Jazeera’s social media arm, AJ+, has inadvertently shot itself in the foot by saying that “Palestine” was “never there to begin with”.

The AJ+ Facebook page, which has over 6 million likes, was introducing its post about the omission of the label “Palestine” on Google Maps. 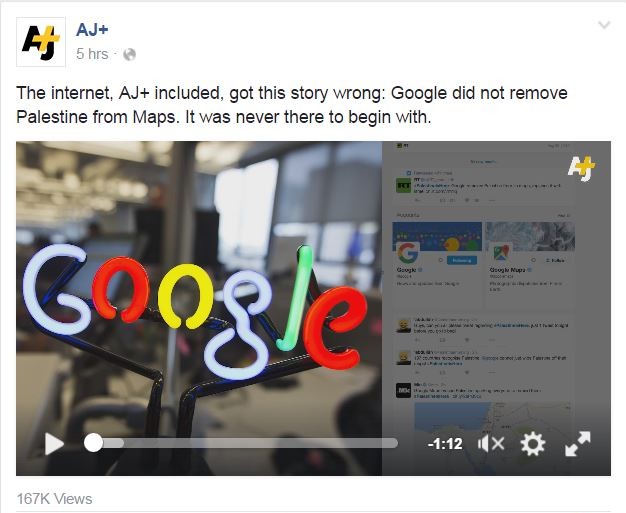 Over 250,000 people have now signed a change.org petition calling for Google to reinstate the label “Palestine” onto its map after a complaint by the forum of Palestinian journalists spread via social media and later news outlets with the hashtag #PalestineIsHere. But further investigation by the media outlet claims that the label wasn’t removed at all as it was apparently not labelled to begin with. However their choice of phrase “Google did not remove Palestine from Maps. It was never there to begin with” was somewhat unfortunate for an agency that is ironically so anti-Israel.

The discovery has caused a wide anti-Israel backlash with AJ+ failing to remove comments on its post that are clearly anti-Semitic. Some AJ+ followers claimed the reason for the omission was that Google is “owned by a Jew” and that “Israel are the real terrorists”

One follower went even further.

But not all the comments demonstrated hatred towards Israel. Here is one user that openly defended Israel: