Anjem Choudary and his anti-Semitic legacy

One of Britain’s most notorious Islamic extremists, Anjem Choudary, has been found guilty of inciting support for Islamic State in a verdict released this week.

Choudary made a mockery of the British justice system for two decades, avoiding any serious criminal charges whilst being given regular airtime and other platforms to continually incite his anti-Semitic, anti-British and anti-West ideology.

His conviction in July, which can only now be reported after legal restrictions were lifted, came after Choudary, 49, and a follower, Mohammed Rahman, 32, were arrested September last year after they urged support for Islamic State and pledged allegiance to the group.

But his conviction represents only a fraction of the jihadi legacy to which he is linked. Choudary, with his band of followers spouting hate on the streets of London without consequence, was often portrayed in the media as the “pantomime villain” but his legacy demonstrates that he was a serial killer by proxy. Why did it take so long?

Anjem Choudary and his extremist groups are believed to have influenced and inspired at least 100 people, a conservative estimate, from Britain to carry out or attempt to carry out terrorist attacks at home and abroad.

Choudary was a key figure for a succession of extremist Islamist groups inlcuding al-Muhajiroun before it was banned under terrorism legislation, and successor groups al-Ghurabaa, Islam4UK and Muslims Against Crusades. Documents from intelligence sources say his groups were at the heart of the Islamist movement in Britain, which has been left facing a “severe” threat of jihadi attack.

People connected to Choudary and his groups who turned to terrorism include Michael Adebolajo, one of the men who murdered the soldier Lee Rigby on a London street in 2013.

He is also linked to foiled plots to kill in the UK over a decade ago and has indoctrinated youngsters who have fled to join ISIS in Syria, leaving their families distraught.

He was dismissed as a clown by some, while helping motivate youngsters to turn to terrorism in Britain and Europe. His Twitter account had over 30,000 followers and was only removed this week. His YouTube videos were still available in June despite requests for them to be removed. Facebook removed his account in August last year.

Hannah Stuart, of the Henry Jackson Society thinktank, said: “A quarter of all individuals convicted of Islamism-inspired terrorism and terrorism-related offences in the UK since 1999 had direct links with al-Muhajiroun (or its aliases), through public membership, al-Muhajiroun-linked activism or regular attendance at lectures and protests. One in 10 offenders had a proven personal relationship with Choudary in particular.”

Commander Dean Haydon, the head of Scotland Yard’s counter-terrorism command, said his team had trawled through 20 years of Choudary’s statements to build the case against him and denied the extremist had been “allowed to run” so intelligence could be gained on the aspirant jihadis he attracted.

Haydon said of Choudary and Rahman: “These men have stayed just within the law for many years, but there is no one within the counter-terrorism world that has any doubts of the influence that they have had, the hate they have spread and the people that they have encouraged to join terrorist organisations.

“Over and over again we have seen people on trial for the most serious offences who have attended lectures or speeches given by these men.”

His influence extended beyond the UK.

Dutch intelligence agency AIVD assessed him to be a key influence in the spread of the jihadi movement in the Netherlands. In Belgium, Choudary helped set up Sharia4Belgium.

According to the European law enforcement agency Europol, Sharia4Belgium “engaged in organised indoctrination and recruitment of young people to participate in the armed conflict in Syria”. Choudary praised its leader after more than 40 of its members were convicted of terrorism. (Continues below) 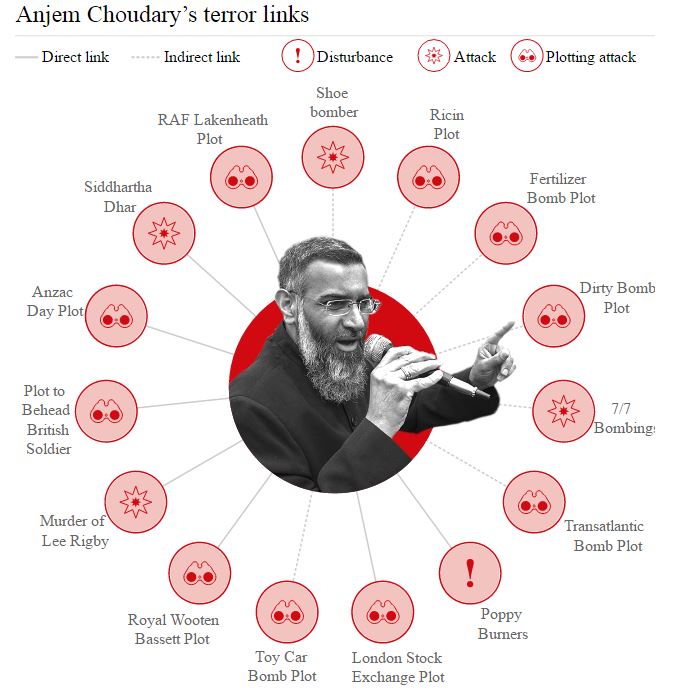 Choudary’s incitement included a hatred towards Israel that is now prevalent among young radicalized Muslims.

The banned Islam4UK, which Choudary founded, was accused of being linked to suicide killers in Israel and the UK.

And during a debate with Douglas Murray, the Associate Director at the Henry Jackson Society think tank, Choudhry argued the actions of Israel are comparable to those of ISIS.

He said: “I would say 2,000 people being murdered in Palestine is terrorism and yet people from this country, Jews who go to Israel who fight with the Israeli Defence Force are not having their passports taken away.

And only a few months ago, Choudary weighed in to the Labour anti-Semitism debate by defending the then suspended MP Naz Shah, in relation to her infamous social media share about relocating the Jewish State.

Choudary stated, “As far as Muslims are concerned, we want the whole of Palestine, which includes what Israel currently occupies, liberated. And I think that what Naz Shah said is not that far from what we would prefer, which is that those who came to occupy the Muslim land of Palestine should be returned from where they came.”

Scotland Yard’s counter-terrorism command had previously attempted to build criminal cases against Choudary, only to be rebuffed by the Crown Prosecution Service, which judged there was insufficient chance of gaining a conviction.

But in September of last year, Choudary and Rahman, himself a known anti-Semitic preacher who had served prison, were arrested under suspicion of being ISIS members. According to the Gatestone Institute, Choudary was released on bail at the time while police continued their investigation. Earlier in the year, it was revealed that Choudary had been vetting British ISIS recruits in conjunction with another Islamist now based in Lebanon.

Commander Dean Haydon said of the conviction reported for the first time: “The oath of allegiance [made by Choudary to Isis] was a turning point for the police. At last we had the evidence that they had stepped over the line and we could prove they supported Isis.”

Choudary and Rahman will be sentenced next month and face a maximum of 10 years in prison. Apparently, Choudary is not afraid to go to prison. According to the Gatestone Institute, he describes it as a fertile ground for gaining more converts to Islam. “If they arrest me and put me in prison…” he warned, “I will radicalize everyone in prison.”