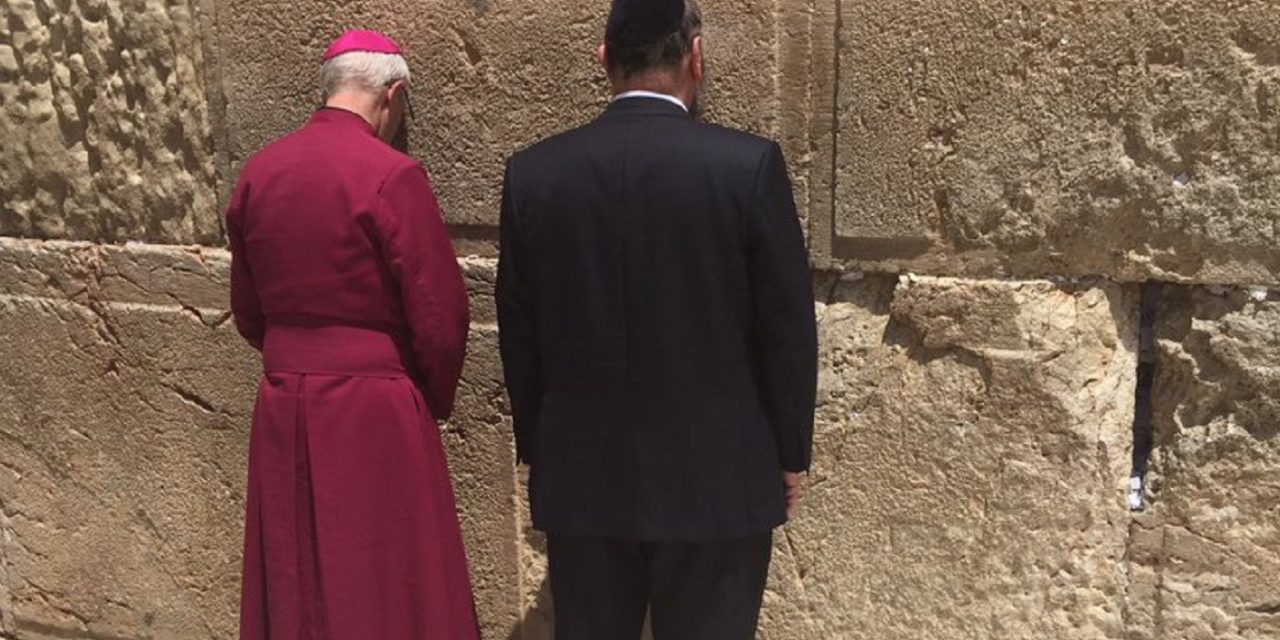 Archbishop Welby and Chief Rabbi Mirvis have prayed together at the Western Wall in Jerusalem during a their visit to Israel.

Pictured standing together at the Wall, Archbishop Welby tweeted “Praying for for peace with Chief Rabbi Mirvis at the Western Wall in Jerusalem today.”

The UK’s Chief Rabbi described it as “a unique moment in history”.

Justin Welby and Ephraim Mirvis visited the Western Wall as part of a tour of Jerusalem’s holy places and followed the Archbishop’s visit to Jordan earlier in which he met with Iraqi refugees and led prayers at the River Jordan.

The two religious leaders later travelled to the Yad Vashem Holocaust memorial where they were given a guided tour of the museum, laid a wreath, and signed the book of remembrance. The Archbishop and Rabbi Mirvis also met with both of Israel’s Chief Rabbis.

A unique moment in history as the Chief Rabbi and Archbishop of Canterbury @JustinWelby pray together at the Western Wall in Jerusalem pic.twitter.com/p6rjmLr5n1

The Archbishop acknowledged the history of anti-Semitism in the church and reiterated his determination to counter it. He said, “In the last year, we see uncovered even in England afresh that sense of anti-Semitism. Until that is expelled from our culture there will be a root, a tap root, for all racism, all discrimination, all cruelty, because of the nature of the human being in our culture.”

Commenting on the visit, Rabbi Mirvis said, “That the Archbishop would make time, in what is an exceptionally busy schedule, to see the State of Israel as I see it – a priceless divine gift, which brought deliverance to the Jewish world after centuries of prayer and yearning, is a testament to the high regard in which he holds the Jewish community.”

Rabbi Mirvis also said that the joint visit demonstrated the strong relationship between the UK Jewish community and the Anglican Church.

Grateful for the opportunity to pray for peace with @ChiefRabbi at the Western Wall in Jerusalem earlier today. pic.twitter.com/bBTV4PSGzA

At Yad Vashem Holocaust museum they laid a wreath and signed the visitors’ book. At the museum Welby spoke of anti-Semitism as the root of all European racism.

“Within European culture, the root of all racism, I think, is found in anti-Semitism. It goes back more than a thousand years,” he said. “Within our Christian tradition there have been century upon century of these terrible, terrible hatreds. One people, who contributed more to our culture as a people than almost any other that one can identify, was also hated more specifically, more violently, more determinedly and more systematically, than any other group.”

The archbishop also spoke of the need to counter the rise in anti-Semitism.

“Coming here today I am reminded how important that is, and particularly when having spoken to members of Parliament over the last few months who are Jewish, they have spoken of the upsurge in attacks on them and the wickedness that they have suffered,” he said.

Mirvis stressed the importance of personal friendship and of building bridges between the faiths.

“So by being here together, the two of us are sending out a very strong message. Today in Jerusalem we prayed together for peace and today in Jerusalem we call on all others, not just to yearn and pray for peace, but to do something proactive to guarantee that we within our fragile and divided world, will indeed achieve peace. That will be the ultimate tribute for us to pay to the victims of the Shoah. May their memory be for an eternal blessing.”

The Hurva syagogue, the rabbi says, is a symbol of the return to Jerusalem pic.twitter.com/FmVEE5TcgO

An Archbishop, his wife and a Chief Rabbi enter the Old City of Jerusalem pic.twitter.com/ISBtabysCD

The intense suffering of Iraqi Christians does not end when they leave #Iraq. Moving to meet with them in #Jordan: https://t.co/YJVjsGM1OD pic.twitter.com/RY6rnErR3g

Together we pray for the peace of the risen Christ in our world today. #Jerusalem pic.twitter.com/5mEgezRxSs